My First First Love is a two season Kdrama series that was first released on Netflix in April of this year (2019) followed by the second part three months later, which picked up right where season one left off. Both were written by Kim Ran and directed by Oh Jin-Seok so there’s a consistent creative flow from one season to the next. The story is about the lives and loves of five friends who have just turned 20.

For his 20th birthday, Yun Tae-O is thrilled when he’s able to talk his father into letting him move into his grandfather’s empty house, but there are two conditions. The first is that his father will drop by unannounced once a week, and the second is that no girl is to be allowed inside the house. However, the independent, single life Tae-O was so looking forward to is cut short when he ends up allowing three homeless friends to room with him, and two are female.

Yun Tae-O’s mother passed away when he was a very young child so he was raised by his father and step-mother. He also has one half-brother. He comes from a wealthy family, his father owning several pieces of property. Tae-O has a very high opinion of himself but not to the point of being obnoxiously conceited. He is a junior in college and enjoys film making as a hobby. He has had a secret on again/off again crush on his childhood friend, Han Song-I, ever since they were kids. He falls for Rye Se-Hyeon, a gorgeous woman two years his senior, after he misidentifies her as the girl he was supposed to meet with on a blind date. He makes the decision to peruse Se-Hyeon when he finds out she’s a student at his college.

Han Song-I and Tae-O have been “joined at the hip” since they were very, very young. She leaned on him when her father passed away and he’s the only one she thinks of when her house is sold out from under her and she has nowhere to go. Her mother left, not giving Song-I any hint of where she was going or how long she would be gone. Song-I has plans to be an architect, following in the footsteps of her late father, and attends the same school as Tae-O. She develops feelings for Seo Do-Hyeon, one of Tae-O’s closest friends.

When Seo Do-Hyeon’s parents divorced he decided to live with his father. He goes to the same college as Tae-O and Song-I, studying for the civil service exam. He helps out his father who runs a tiny restaurant that is in one of the buildings Tae-O’s father owns. He works hard at several part-time jobs to make ends meet. Do-Hyeon first meets Song-I under less than favorable circumstances and then discovers they share a mutual friend, Tae-O. The more Do-Hyeon is around Song-I, the more he likes her.

O Ga-Rin comes from a filthy rich family and is the heiress to the Daebaek Group. She’s is tired of her mother dictating her every move and decides to run away. Only knowing Tae-O, she ends up living at his house. Since this is the first time she has experienced her own independence she learns a little at a time what it’s like living in the real world. Ga-Rin leans on Choe Hun as he takes her under his wing.

Choe Hun has his heart set on being an actor but receives no encouragement from his parents. Instead, he is emotionally and physically abused when he tells his father he has quit college to peruse acting. When Hun is driven out of his own home he finds shelter and understanding at Tae-O’s place. At first Hun sees Ga-Rin as a spoiled rich kid but soon finds himself falling for her sympathetic heart and innocent nature.

Information about Kim Ji-Soo, the actor who plays Yun Tae-O, can be found in my Fantastic review.

Jung Chae-Yeon, the actress who plays the part of Han Song-i, made her entertainment debut in 2015 as a member of the girl group DIA. In December of that same year she withdrew from the group in order to participate in the trainee survival program Produce 101, finishing in seventh place. She then debuted in the project group I.O.I. She’s kept busy being a member of both DIA and I.O.I. Her acting debut came in 2016 through the Kdrama Drinking Solo. She was the face of Lamaucha, a jewelry brand, for which she earned 200 million won ($165,000 U.S.) for just one year. Her first leading role came in the music drama To. Jenny.

The part of Seo Do-Hyeon is played by Jung Jin-Young, better known as Jinyoung. He is a singer, songwriter, record producer, actor, and was the leader of the boy group B1A4. He was discovered when a photo of himself was posted on the website Cyworld. He trained for about two years before becoming a member of B1A4 in April of 2011, but now is no longer a member of that group. In 2013 he made his acting debut through the drama She is Wow, and his motion picture debut came the following year in the movie Miss Granny, in which he also wrote the ending song. In 2016 he was named No. 1 solo composer of the year. Dramas I’ve seen him in include Jeju Island Gatsby and Moonlight Drawn by Clouds for which he received two honors – Best New Actor and the Choice Award.

Choi Ri’s character is that of rich girl O Ga-Rin. She began acting in 2016 with an appearance in the Kdrama Blow Breeze and then got a part that same year in Goblin. The following year she won the New Rising Star award for her role in her very first movie, Spirits’ Homecoming, and then took home the Best New Actress award for her second movie entitled Keys to the Heart. I’ve also seen her in Witch at Court and Come and Hug Me.

Kang Tae-Oh is the man cast in the role of Choe-Hun. You can read about him in my review of Evergreen. Here’s some information not included in that review – in 2017 he received the Rising Star Award for his role in the Kdrama You Are Too Much.

Every character in My First First Love was written in a way that makes them real and personable, like the people in Triple, The Third Charm, and The Package. I liked them (with maybe the exception of Rye Se-Hyeon once in a while) and sincerely wanted them to be happy. I enjoyed getting to know these characters thanks to good writing and quality acting. There’s also a lot of good character growth written into these people.

My biggest take-away from My First First Love is the fact that real love is something you don’t have to work at. It’s just there. You don’t make time for it or try your best to make someone happy or plan out ways to help your love grow. If you have to tell someone, “I’m sorry. I’ll try and do better,” maybe you need to rethink some things. When you react without thinking, your first priority – that is what/who you really love.

The ending of the show (the eighth episode of season two) is full, inclusive, realistic, and satisfying. The audience gets complete closure on all five major characters’ lives and loves, wrapping everything up neatly.

I watched the first season of My First First Love when it came out back in April. Having no idea it was scheduled for two seasons, I was horrified when the last episode was over and nothing had come to a close. It was like what I felt with Queen of Mystery, but worse! I’m so glad I didn’t have to wait too long to find out what happened to these characters. There are eight episodes in each season (slightly less than an hour a piece), for a total of 16 episodes.

For those of you who would rather not read subtitles, Netflix offers both seasons dubbed. After I finished watching the entire thing with subtitles I went back and tried it with the dubbing and just didn’t like it as well. There’s not enough real emotion in the voices of the folks doing the dubbing. But for those of you who don’t care to read your shows, you just might enjoy it dubbed.

The soundtrack has nine songs (four ballads and five with a faster pace) and four artists (Choi Sang-Yeop, Jo Eun-Ae, SeO, and Keeyo). Wanted is the the best ballad on the soundtrack. As I listen to it I imagine two lovers slow dancing as everyone else in the crowed room slowly fades away until just the main couple is there alone, holding each other tenderly. It’s beautiful. Colorful is my favorite upbeat song. It’s the type of music that would play in the background as a couple roam around together at an amusement park.

Of course Tae-O’s house is the main background focus in the show. We often see the students at school, too. One thing I thought was nice was that the characters mentioned how much they enjoyed the view of the city from their neighborhood streets. I liked that they were happily satisfied with where they lived. We also get to see these people go to the beach on two different occasions, once in each season. 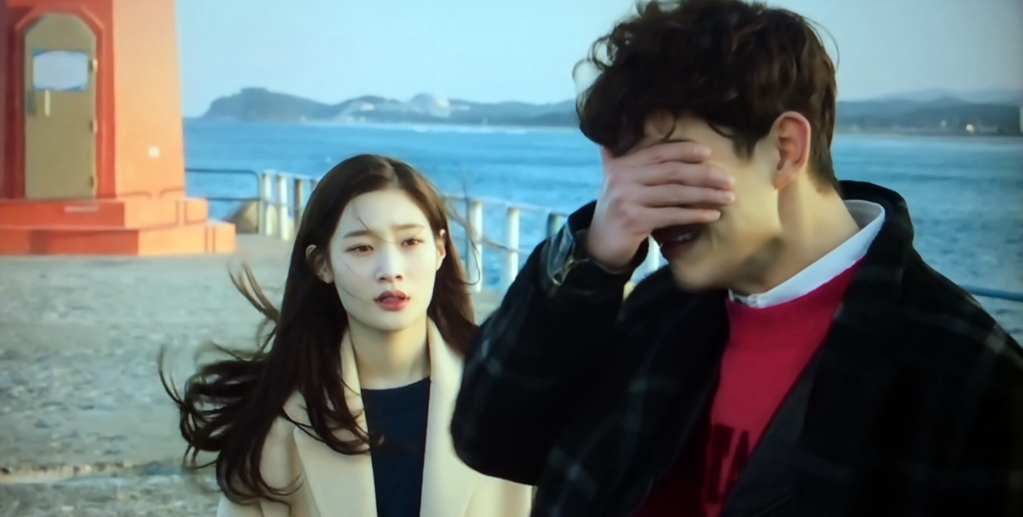 My First First Love is an enjoyable coming of age drama that is semi-plausible. No bad guys, no plotting – just life, love and friendships. I think you’ll like it.

The Bad:
Two eight episode parts rather than one 16 episode drama

3 thoughts on “My First First Love”