I had stayed away from Wild Romance because a love story about a baseball player and his bodyguard didn’t sound like my cup of tea.  Oh, how very wrong I was!

The thing that surprised me was Wild Romance being more than just a love story.  Park Moo-Yeol is a baseball player who is the target of a stalker that is trying to ruin his life.  He is given a bodyguard, Yoo Eun-Jae, who hates him because he’s the arrogant short stop on the team she despises.  But when she discovers he’s not all that bad, romantic thoughts begin to enter her head.  The bickering tension between Moo-Yeol and Eun-Jae is quite fun and it’s enjoyable to watch it turn into admiration, respect, and a little more.  As things start to happen that target Moo-Yeol in a way that threatens his baseball career, we begin to try and figure out “who done it”.  The writers had me really baffled for awhile.  “Is it a character they’ve introduced us to already or someone they haven’t shown us yet?” I wondered.  I guessed the right person but not until I was about half-way through the show, and even then I wasn’t 100% sure and wondered if it might be someone else.  The writer’s idea with who the stalker should be and why they did it was an excellent one.

The writer also did a fantastic job with winding things down.  The mystery part of the show is over by the end of the 15th episode, leaving plenty of time to bring everything else to a carefully thought-out ending.  That’s not often the case with Korean dramas.

This Kdrama had wonderful, diverse characters –

Lee Dong-Wook is Park Moo-Yeol, a famous baseball player.  According to his childhood journal, he loves playing baseball even more than he loves his mother.  He has a pretty high opinion of himself and needs a lot of practice in the patience area of his character.  He’s handsome and knows it.  (Check out Lee Dong-Wook in Blade Man.  His character in that is darling!)

Lee Si-Young is Moo-Yeol’s bodyguard, Yoo Eun-Jae.  She hates having to be with Moo-Yeol, that is, until her heart begins to soften and she sees there’s more to the arrogant athlete than meets the eye.  She isn’t brilliant but she is kind, and she’s very cute when jealous.

Dong-Ah’s boyfriend is Kim Tae-Han, played by Kang Dong-Ho.  She refers to him as a “robot” and it’s not difficult to see why.  He hardly even cracks a smile, is very serious and straight forward, and deals with the business end of the baseball team.  He doesn’t seem very full of emotions but we come to find out he’s not as “robotish” as Dong-Ah first thinks.

Oh Man-Seok plays Jin Dong-Soo, Moo-Yeol’s best friend since their college days.  He is a soft-spoken man who loves his family and baseball.  Unfortunately, he’s not one of the best players so he decides to retire and become a manager for the team, instead.

Dong-Soo’s wife is Oh Soo-Young, played by Hwang Sun-Hee.  She’s an artist who loves to paint but gave it up because she felt her skills were inferior to her friend’s painting abilities.  She also never felt like her mother supported her art and that is a source of pain for her.  She is a kind woman who puts other people’s feelings and desires over her own.

Jessica, of Girl’s Generation, plays Kang Jong-Hee, Moo-Yeol’s first love.  She left Moo-Yeol because of a situation involving her bipolar disorder.  Even though Moo-Yeol dated after their break up, he’s never gotten Jong-Hee out of his heart.  She claims she has her disorder under control and wants to restart their relationship.

The music is great.  There wasn’t a single song that I didn’t like. Jessica not only acts in the show but she sings on the soundtrack, as well.  One song, entitled Painful, is absolutely gorgeous.  I don’t know who sings it but his voice is perfect.  It’s the kind of song you could listen to as you fall asleep at night.

There isn’t any exciting scenery or exotic places where the show was filmed but I didn’t even realize that until the end.  The stalker mystery is so engrossing and the love story so fun that nothing else matters.

At the end of episode 15 there’s a small part in a pretty tense scene (I can’t tell you what it is but you’ll know it when you see it) where the director really messed up.  It’s a huge goof but if you’re not paying close attention you might not even be aware of it.  For me, it stuck out like a sore thumb and, pretty much, the entire last episode hinges on the audience not noticing the mistake.  Even though it wasn’t bad enough to ruin the whole show it did make me think, “Oh, come on!  Do you honestly think I don’t see…”  Excuse me, Mr. Director, but it was your job to make sure the scene wasn’t so “shallow”. 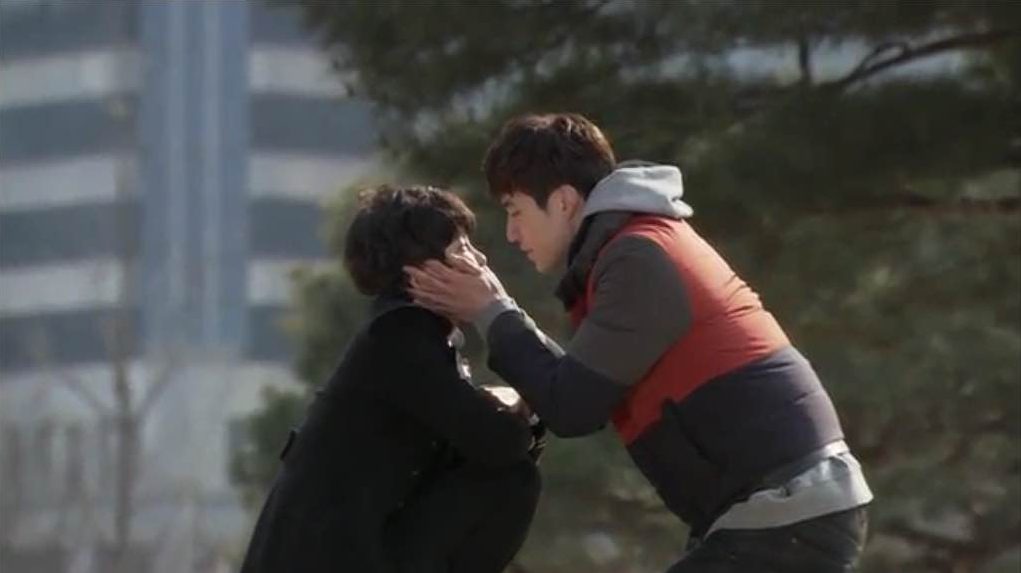 I really hope you give this show a try.  It’s the perfect combination of mystery and romance with some splashes of comedy here and there.  Wild Romance is a Kdrama you’ll want to talk about the minute the ending credits start rolling.

The Bad:
A little bit of editing here and there