Would you like to live some part of your life over again?  Is there something you would do differently?  Well, Ha No-Ra gets to do just that in the Kdrama Twenty Again. Ha No-Ra is a small town girl with a big dream of becoming a professional dancer.  Because she is so passionate about it, her grandma decides to move them to Seoul so No-Ra can attend a special arts high school.  There she becomes acquainted with Ra Yoon-Young and Cha Hyun-Suk, two classmates who become her closest and dearest friends.  But when she meets Kim Woo-Chul her dream of becoming a professional dancer slips away as she finds herself unexpectedly pregnant.  She drops out of high school and devotes the next 20 years of her life to being the best wife and mother she can be, and to her that means being meek, mild, self-sacrificing, and 100% submissive to her husband’s wishes.  Two decades later, Woo-Chul asks for a divorce claiming No-Ra is so unintelligent they “can’t communicate.” She’s devastated but manages to successfully postpone legally registering the divorce papers until their son, Min-Soo, graduates from high school.  Then just before it’s time to register the divorce, in a desperate attempt to hold on to her husband, No-Ra decides to go to college, hoping she’ll become so smart he’ll want to keep her around.  Aside from the normal challenges of college life, there are a couple hurdles No-Ra has to overcome – her son is going to the school she was admitted to and her soon-to-be legal ex-husband just got a job there as a psychology professor.  But a wonderful surprise awaits her.  Hyun-Suk, the boy who loved her in high school, is teaching the theater class she enrolled in and his love for her is just as strong as ever.

Ha No-Ra is a sweet woman who put her whole heart and soul into being a wonderful wife and mother.  She’s completely unaware of the fact that she has been a victim of emotional abuse her whole adult life.  Although she begins college to try and secure her place in her “ex”husband’s life, she decides to continue going just for her own satisfaction.  She finds college life difficult as an older woman but loves experiencing everything she missed when she was younger.

Dashingly handsome Cha Hyun-Suk is a famous theater producer.  He’s one busy guy, working on a new show and teaching a theater class at the same time.  He fell in love with No-Ra in high school and became close to her grandmother, secretly, because of that love.  He received emotional strength, and came to have faith in his abilities and talents, because No-Ra believed he would someday become Korea’s greatest producer.

Hyun-Suk’s assistant producer, Shin Sang-Ye, is also his teaching assistant and she’s had a big crush on him for quite some time.  She’s his friend, confidant, and business associate and he counts on her for everything.  There’s only room in his heart for his first love, though, and No-Ra’s been there for the past 20 years.

Professor Kim Woo-Chul is No-Ra’s “ex”husband.  His personality can be summed up in one word – narcissist.  He thinks he’s better than everyone else, he’s always right, and he’s the only thing that really matters. He also seeks after praise, is extremely arrogant, and just charismatic enough to pass himself off as being a great guy.

Twenty year old Kim Min-Soo is No-Ra’s one and only child.  He sees his mother in much the same way his father sees her, lacking.  He signs a contract with his father stating he will give 100% to his college studies – dating is out.  But what happens to his resolve when cute and playful Oh Hye-Mi crosses his path?

The darling freshman who falls for Min-Soo at first sight is Oh Hye-Mi.  She comes to his aid, being his “black rose”, and quickly finds a place in his heart.  Her college goal is to party during her freshman year and then buckle down and take the rest of her school years seriously.

Woo-Chul secured his new professorship because of his connection with Kim Yi-Jin, who happens to be the daughter of the dean of the school and No-Ra’s male/female relationships teacher.  Who exactly is this sophisticated, intelligent woman with so much clout?

Ballet teacher Ra Yoon-Young has been close to No-Ra since they were in high school.  They are the best of buddies even though their friendship began with a very rocky start.  Being close to both No-Ra and Hyun-Suk has given Yoon-Young insight and knowledge about both her friends, making her aware of things the other two are clueless about.

I wasn’t impressed with the soundtrack at first but as time went on I either got used to the songs or they actually got better.  For me, I think the problem happened right at the beginning with the opening song, Cuckoo.  In my opinion it was too “chipper”, too “perky” for what was going on in the show.  It was more like the music you’d expect to hear in a fun, fast-paced comedy.  On the upside, singer/songwriter Roy Kim performs a ballad called You Don’t Love Me.  It’s a beautiful piece of music and Roy Kim’s voice compliments it well.  Oh You, Yeah You is a fun song that makes you feel light and keeps you tapping your toes throughout the whole thing.  Kim Min-Jae, the actor who plays Kim Min-Soo, No-Ra’s son in the drama, raps a really awesome song – I think it’s entitled Star, but I’m not sure.  You can watch him recording it on YouTube.  And, last but not least, the instrumental music in the show is very nice.

As for scenery, Twenty Again takes us to some really pretty places.  I loved the “watermelon at the river” scene with young No-Ra and Hyun-Suk.  It’s such a beautiful area.  There’s also a lovely “finding the time capsule” scene at the end.  And there’s a nighttime shot of No-Ra and Hyun-Suk as they walk together by a little pond.  Scenery wise, there’s nothing really breathtaking in this show but many shots are in places that are definitely way above average. 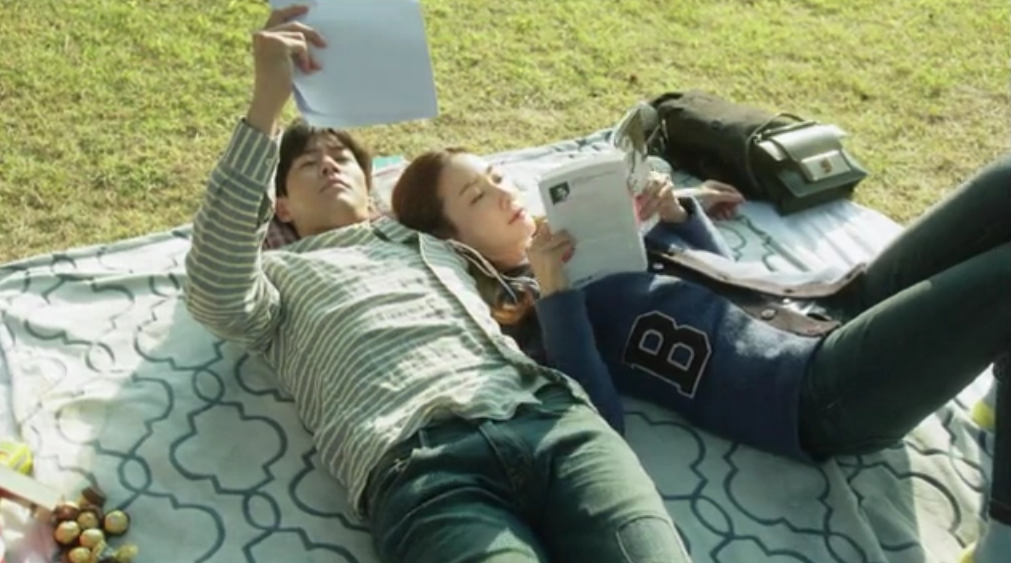 Every now and then I think writers slip things into their stories just to make us ponder, and Twenty Again is definitely one of those dramas.  This is my take-away…  Ha No-Ra is a kind woman who just wanted to be the best wife and mother she could be.  But the way she went about it backfired.  She figured being a good spouse and parent meant she had to always put her husband and son’s desires above her own.  She did what they wanted her to do, throwing out her own opinions and dreams and lost touch with who No-Ra was, separate from her family.  But, just like the safety instructions people receive when they fly on a plane – you have to make sure your own oxygen mask is on before you can help anyone else.  A weak individual can’t help anyone. At the end of the show, No-Ra tells Yoon-Young, “Living my life by other people’s standards – I won’t live like that anymore.  That’s meaningless.”  Wonderful advice.  Let’s all become strong, happy individuals so we can give the best of ourselves to those we love and live our lives with meaning.