Missing Noir M is a deep, heavy Kdrama with twists, turns, and a surprise ending that made me hope for a sequel because I, for one, defiantly don’t want that to be all there is to it.

This drama reminded me of an American weekly, one hour cop series, only a whole lot better!  It has three main characters – Kim Kang-Woo plays the part of ex-FBI agent Gi Soo-Hyun, Park Hee-Soon is Detective Oh Dae-Young, and Jo Bo-Ah plays Officer Jin Seo-Joon.  Then there are two supporting characters, Director Park Jung-Do played by Kim Kyu-Cheol, and Coroner Kang Joo-Young played by Park So-Hyun.  Those are the five reoccurring characters that appear in each show, people we learn to care for, worry about, and respect. 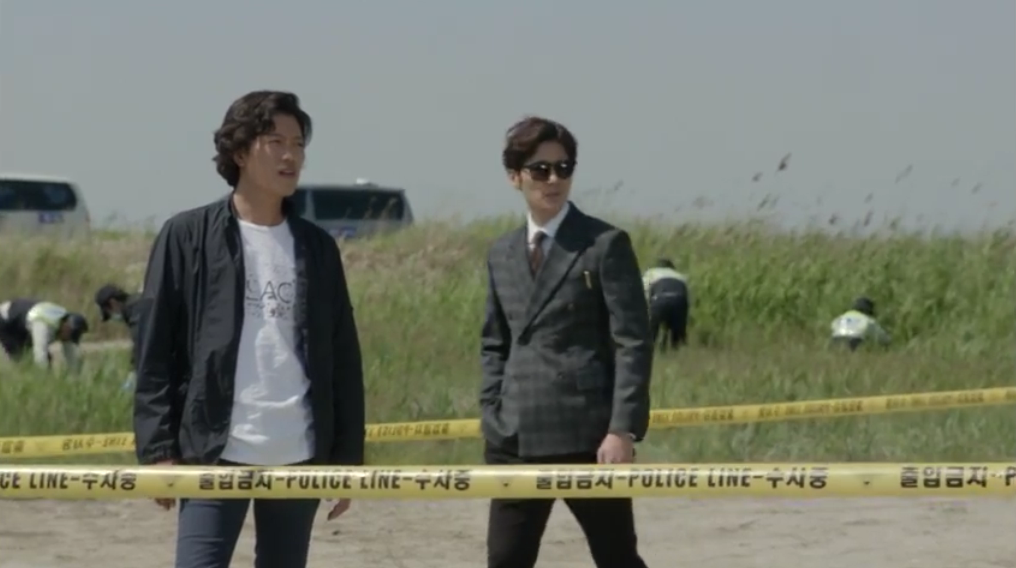 These are the very first words uttered at the beginning of the show…  “James Gil.  Korean name Gil Soo-Hyeon.  Born 1979, Seoul.  Genius with an I.Q. of 187.  Emigrated to the United States at age seven.  At 10, admitted to Harvard.  At 15, admitted to NASA.  After he became an adult, he joined the FBI.  He solved various American cases with his innate skills.  He was initially investigated for excessive use of a firearm, so he was appointed to an FBI post in Korea.  He submitted his resignation to the FBI effective June 7, 2015.  He is currently at the end of his term.  What was the reason for his resignation?  That, no one knows.”     Gil Soo-Hyeon is a quiet, methodical man who keeps very much to himself.

Detective Oh Dae-Young is a loving husband who has been on the police force for 20 years, and he looks the part – jeans, T-shirts, jackets, long hair, tennis shoes, and “a little rough around the edges” personality tells us this is a man who’s main concern is catching the bad guys.  He is obviously respected by the other officers he works with and his main asset is the fact that he goes with his gut feeling in tying to solve cases.  Interestingly enough, the man has never shot anyone in all his years of service.

Officer Jin Seo-Joon is like a human computer.  She is proficient in anything she’s asked to do – trace a license plate, check out security cameras in a certain area, come up with background information on a suspect… you name it and this girl can do it, and do it quickly.  She respects the two men she works so closely with and they, in turn, respect and count on her.  She has an interesting past that is helpful in solving one of the cases.

The tiny, three person team works on special missing persons cases.  Together they dig for clues and uncover information needed to locate the person reported as missing.  All too often it’s a race against time as they hope the person will still be alive when they find them.

Haeundae Lovers was my introduction to Kim Kang-Woo.  I thought he was great – handsome and a wonderful actor.  He actually began his acting career as an actor, majoring in Theater and Film at Chung-Ang University. He won the Best New Actor award and the Best Actor award for his roles in the feature film movies The Aggressives and The Railroad.  Oh, he also sings.

Park Hee-Soon graduated with a Theater degree from Seoul Institute of the Arts.  He was a member of a repertory company for 11 years and then began working in the film industry in 2002.   He’s won five awards, each one Best Supporting Actor and four of them were for his role in the feature length film Seven Days.

Jo Bo-Ah started her entertainment career in 2011 playing a small role in a daily sitcom.  A year later she played the lead female character in the enjoyable, romantic Kdrama Shut Up Flower Boy Band.  Now, three years later, she shows us she knows how to play a more serious role and does a fantastic job in this captivating, intense drama.

Missing Noir M doesn’t tip toe around the bad stuff.  There are some pretty unsettling things that go on and we’re shown most of it – suicide, mutilation, beating, burning, drowning, stabbing, hanging, shooting…  It’s a hard-hitting look at the dark side of life and all the horrendous things on that road.  That being said, I really enjoyed each and every story.  However, the first two episodes were my favorite.

There are ten episodes with seven different plots – episodes one and two are A Puzzle From Prison, episodes three and four are called Rust, five is Murder Reconstruction, six is entitled Murder Premonition, seven is HOME, episodes eight and nine are called Pure Heart, and episode ten is the one hour plot that closes the drama entitled Injustice.  Each and every one is superb – skillfully written and masterfully acted.

There are a couple songs that are sung during the time the credits are rolling at the end but the soundtrack is mainly instrumental, subtly helping to intensify the anxiety in the stories.  The scenery is vastly varied – empty fields, construction sites, a reservoir, old neighborhoods… tons of different places are used successfully for the backgrounds of each new plot. This isn’t an easy watch.  It takes some effort to understand what’s going on and there are a few scenes that may be a little too graphic for some people, but it’s a very good show and a great ten hour chunk of entertainment.  Missing Noir M is one Kdrama crime show lovers should not miss!

The Bad:
May be a bit too graphic for some viewers