Wow, amazing, lump in your throat, uplifting, close to tears…  all words that pop into my head when I think of Page Turner.  It’s the first 10 I’ve ever given a mini-drama and it’s very well deserved. When you have three hours available to sit and watch something, make sure you turn on Page Turner. The story is about three young people who excel at what they do and how they deal with the trials that come their way, threatening their hopes and dreams.

Yoon Yoo-Seul and Seo Jin-Mok attend the same arts school and are bitter rivals.  Both are amazing pianists whose competitive streak has kept them enemies since they were children.  Jin-Mok prays Yoo-Seul’s winning streak will be stopped and his pleas are answered in the form of a car accident which leaves Yoo-Seul blind.  While at the hospital, Yoo-Seul meets a kind, young athlete named Cha-Sik who is there because of a pole vaulting accident he had during a competition.  When told he has a back problem that will make it impossible for him to compete any more, to ease the emotional pain of loosing his dream, his mother finally decides to tell him about the father he never knew, a world famous concert pianist.  That gives Cha-Sik the courage and determination to follow in his father’s footsteps and take up playing the piano.  Can these three young piano students learn to get along or will their rivalry and anger keep them from being the best they can be?

Yoon Yoo-Seul is a music prodigy who has based her entire life around playing the piano.  It’s not surprising she’s the number one piano student at the arts high school she attends.  Her mother is a piano teacher who is obsessed with seeing her daughter become a world famous pianist.  She encourages Yoo-Seul to cheat during exams and doesn’t allow her to even ride a bike, because “she may fall off and hurt her hands.”

Cha-Sik is a kind-hearted, positive young man who loves sports, particularly pole vaulting and he’s amazing at it, breaking an unbelievable record.  He doesn’t allow anyone to tell him he can’t achieve something because he knows if he tries hard enough he can succeed at whatever he desires.  He adores his mother and she also loves him.

Seo Jin-Mok loves to play the piano and has a driving desire to be the best but one thing stands in his way, Yoon Yoo-Seul.  They have been rivals ever since they were young kids.  Jin-Mok’s piano teacher was Yoo-Seul’s mother and he hated it when she corrected him.  He thought he played perfectly and rudely accused her of deliberately picking on him.  Although he is a wonderful pianist technically, he lacks the emotion needed to really make his music beautiful.

I really don’t know much about Ji Soo at all.  He’s been in feature films and Kdramas since 2008 but that’s pretty much all the information I have.  He does a superb job playing lovable, optimistic Cha-Sik – without a doubt my favorite character in the whole show.

Shin Jae-Ha began acting in 2014.  He’s been in feature films and several Kdramas, two of my favorite being I Remember You and Remember.  Since 24 year old Jae-Ha is a DanGook University music major, I’m guessing he did all his own piano playing on the show.

There’s a tiny bit of hand-held camera work but the storyline, characters, and actors are so wonderful it didn’t bother me that much.  I was way too engrossed in what was going on to be bugged by a little shaky filming.  The show is that good!

As you can probably imagine, the soundtrack is filled with beautiful, classical, piano music.  The season is winter so there really isn’t any lovely outdoors shots.  However, there is a colorful, upright piano in a short tunnel filled with graffiti which is definately the most unique scenery in the show.  Since a homeless guy lives there, the tunnel has a sad kind of feel to it, but the colorful walls and piano brings life to the place.  I call it “symbolic scenery”.  Yoo-Seul, Cha-Sik, and Jin-Mok are each going through their own individual “tunnel”, but their determination, hard work, and perseverance adds “color” to the walls, giving them reason to smile once again. 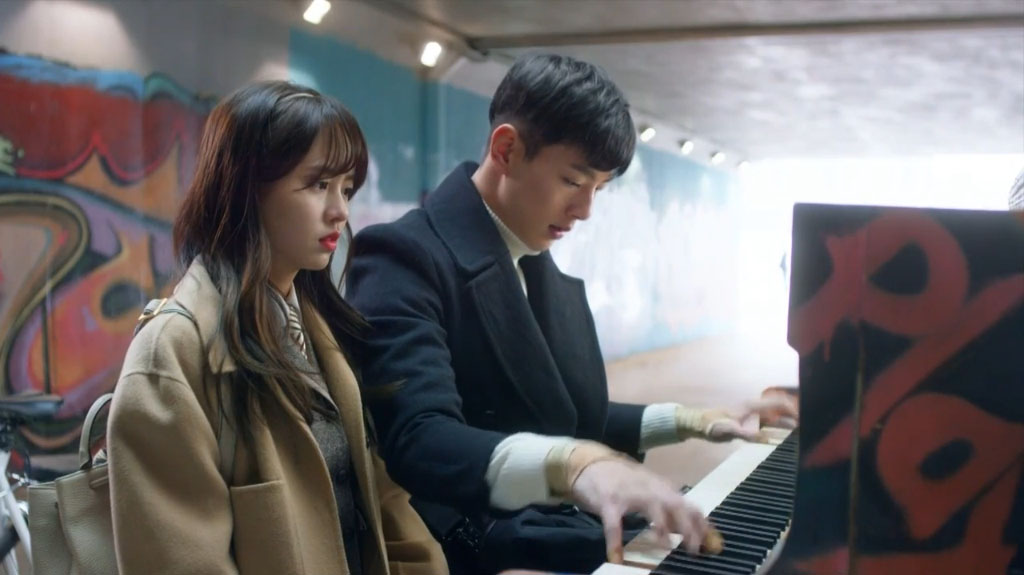 Page Turner is a feel good show.  Think of it as a yummy dessert.  Even though the entire drama is entertaining, it’s the ending that puts tasty frosting on a delicious double layer cake.  It’s wonderfully uplifting and 100% “yes”!