How did Kdrama fans get so lucky this year?  Here we are, still not quite through with summer and we’ve had so many good Kdramas already.  Well, here’s another one to add to the awesome list – Doctors (aka Doctor Crush). 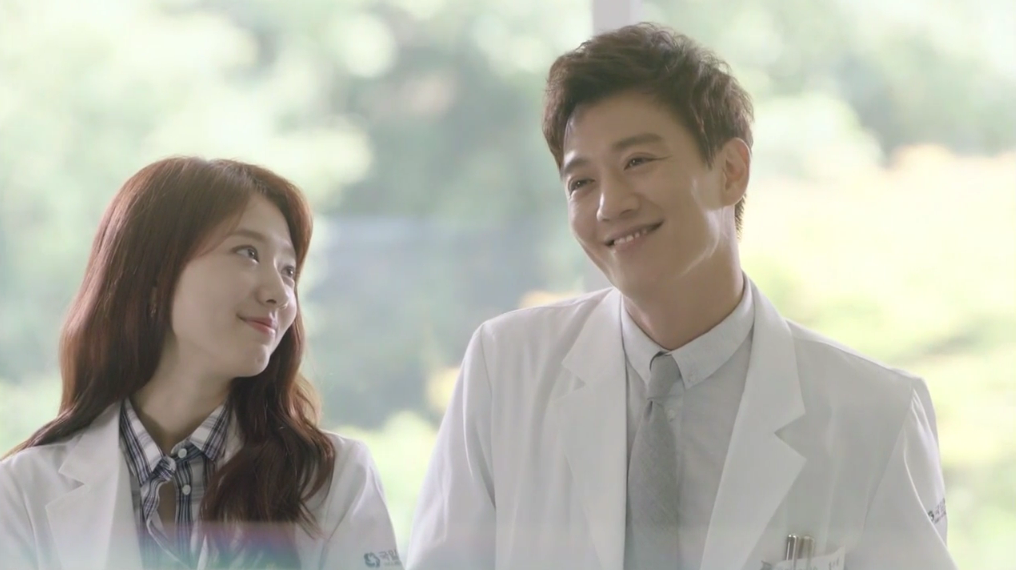 This show could almost be considered a “dating tutorial”. The audience is given a plethora of wonderful dos and don’ts concerning love and relationships but none of it is done in a preachy way.  All the information we get is hidden, in plain sight, among a romantic plot centered amidst the lives of medical professionals.  For instance, “Dating is the shared history between a man and a woman being formed.  It’s about how much they accept each other’s pasts in the present.”

Hong Ji-Hong is a science teacher at an all girls’ school.  He is well respected by the adults and loved by his students, Jin Seo-Woo in particular.   Because

Hong Ji-Hong grew up an orphan but was adopted in his teenage years by a kind, single, older doctor.  Following in the footsteps of the man he has come to respect and love, that he now calls “Father”, Ji-Hong decides to be a doctor, as well.  But for some reason, he leaves the medical profession he loves to become a teacher.  After he chooses to quit teaching, he goes back into medicine.  Ji-Hong is the best neurosurgeon at the hospital his father is the head of.  He enjoys the simple things in life and sees deep meaning in small things – “A back hug has the ability to make you feel choked up with emotion.  It’s the feeling of someone standing firm behind me and supporting me in my life.  This is the greatest joy that a lover can give you.”

As a child, Yoo Hye-Jung lived with her father and stepmother but she was so miserable she began to cause trouble.  In order to survive she chose to close herself off to love.  She’s a brilliant young woman but is too angry to put her intelligence to good use.  Her father gives up, leaves her at his mother’s house and cuts all ties with her but that’s the best thing that could have ever happened.  With the help of a classmate, Hye-Jung learns that “studying is about keeping your butt in the seat, not your brain,” and excels in math.  She also discovers love, acceptance, friendship, and encouragement and comes to realize “living recklessly is like abusing yourself.”  She develops a great respect for her teacher and, after watching him save a pregnant woman who collapses on the street, decides to become a doctor like he once was.  With determination to make something of herself, Hye-Jung starts down a new path, vowing to make a better life for herself and help others along the way.

Class president Jin Seo-Woo is academically ranked number one, well liked, pretty, and comes from a rich family of doctors.  She dutifully follows the career path outlined for her by her father and becomes a doctor as well so she can someday take over the hospital her grandfather and father are desperately trying to take control of.  As she matures, somewhere along the way she falls in love with being a nuerosurgeon and decides to bypass the power and glory her parents have planned for her and just be the best doctor she can be. (I couldn’t help but feel sympathy for Seo-Woo.  She likes two men who kindly reject her, both falling in love, instead, with Hye-Jung.  In that respect it reminded me of the drama Fireworks.  If that happened to me, “What’s wrong with me and what’s so great about her?” would cross my mind a hundred times a day.  Poor Seo-Woo.)

Jung Yoon-Do loves being a surgeon and he’s a very good one.  He has no interest in all the offers he receives to become a board member of the hospital (until he sees it as a way to help out a special someone).  Although Seo-Woo has loved him since their medical school days, and tells him so, he thinks of her as just a little sister.  Ouch!  Who does Yoon-Do fall for?  Hye-Jung, the pretty nuerosurgeon with the tough attitude and shady past.  However, he runs into some major competition for her affections.

I would have been happy to have this 20 hour drama go on for many more episodes.  It runs smoothly with easy transitions from one interesting medical case to another through a well written storyline.  If you’re squeamish about blood and looking at the inner workings of the human body, some things may be a visual challenge for you.  I thought the operation scenes were fascinating.

As much as I loved the show, there was something that bothered me.  Hye-Jung said there was a nine year difference between her and Ji-Hong.  They meet as student and teacher when Hye-Jung is 18.  By that time Ji-Hong had already practiced medicine, left it, and become a teacher. How many years is medical school?  Then he’d have years of residency to go through.  Then, would he need to get a teaching degree?  And how many years had he been teaching?  I’ve never been a whiz at math but, to me, all of that would add up to be more years than just nine years.  Oh, well.  That doesn’t change the fact that it’s a great romance with wonderful kisses.  (Just a little side note, there’s also a nine year age difference, in real life, between Kim Rae-Won and Park Shin-Hye.)

Kim Rae-Won (Ji-Hong) and Park Shin-Hye (Hye-Jung) are very good together.  However, in my opinion, the chemistry he has with Jung Ryeo-Won in Which Star Are You From? seems more cozy. They just bounce off each other better.  There are two scenes that are extremely similar in both dramas – one where Rae-Won’s character goes shopping with his lady and he keeps throwing back things she puts in the cart, and another one where they are alone on a soccer field at night.  The scenes between Seung-Hee and Bok-Shil are more romantic and cuter than the ones Rae-Won did with Shin-Hye in Doctors.  At least that’s my unprofessional opinion.  Watch both shows and let me know what you think.

It doesn’t matter what role he plays, Kim Rae-Won (Hong Ji-Hong) is always Kim Rae-Won.  There are some actors who loose themselves, becoming absorbed in the character they are portraying, but Kim Rae-Won is just the opposite.  He absorbs his roles, making his character become himself.  Do yourself a favor and check him out in some other things – Which Star Are You From?, Love Story in Harvard, Gourmet, A Thousand Days Promise, Attic Cat… it doesn’t matter who the character is, right away he becomes Kim Rae-Won.

For me, Park Shin-Hye is a hit and miss.  When I love her, I really love her, like I did in Pinocchio, Heartstrings, and now Doctors (Yoo Hye-Jung).  However, I wasn’t completely thrilled with her when she played the mumbling nun-wannabe turned (male) singing star in You’re Beautiful or the painfully shy neighbor in Flower Boys Next Door.

This wasn’t my introduction to actress Lee Sung-Kyung (who plays Jin Seo-Woo).  I first saw her in It’s Okay, That’s Love and then fairly recently in Cheese in the Trap.  Those were just supporting roles but I thought she was great as the second female lead in Doctors.  Jin Seo-Woo is a complex character and Sung-Kyung made me feel sympathy for Doctor Jin and want the best for her.  I look forward to seeing Sung-Kyung in the lead role of a female weightlifter, coming up in a few months!

Yoon Kyun-Sang began his career in the entertainment industry as a model.  From there he went on to acting.  I’ve seen him in Faith, Pinocchio, and The Time That I Loved You, 7,000 Days but, sadly, I don’t remember a lot about his acting.  Is that because he had small roles?  Maybe it was because he was opposite stars that are on my “favorite” lists.  I’m sure I’ll be able to remember his acting in this, though.  Jung Yoon-Do is funny, straightforward, and intelligent and Kyun-Sang played him perfectly.

I had just seen him in his first Kdrama male lead role in Beautiful Gong Shim a few weeks earlier, so imagine my surprise when wonderful Namgung Min showed up in episode 13 and stayed through the beginning of 15.  I love that guy.  His character in this is a poor, single father of two boys who are in need of brain surgery.  His storyline is heartbreaking.  I thought he/his acting was a great bonus to Doctors.

What’s my favorite song in this show? – No way, performed by the talented trio of Urban Zakapa.  It’s just beautiful and is the one played most often.  I was happy to find out it peaked on the music charts in 24th position.  It’s Love is my second favorite song and is performed by Jung Yup from the R&B group Brown Eyed Soul.  It ranked 36 on the charts.  Doctors had yet another chart-ranking song, Sunflower, in 72nd place.  As you can see, there’s very good music in this drama.

There’s nothing stand-out wonderful to the scenery until we get to the last two minutes of the show and then, pow! – a very romantic setting!  Wait for it!  There’s also an amazing scene that’s absolutely unforgettable – you know those red phone booths in Kdramas (Queen In-Hyun’s Man and My Love Eun-Dong both have them) where the couple we’ve wanted to see kiss finally find each other’s lips?  Well, that’s the perfect backdrop for Ji-Hong’s encouraging comment to unfold, – “Someone once said that life is not about waiting for the storm to pass.  It’s about learning to dance in that rain.”

This Kdrama is an enjoyable romance with several good life lessons thrown in for good measure.  I want to end on one Ji-Hong teaches us, “A man’s life is about making decisions and taking responsibility for them.”  Excellent advice.  So go ahead and make an appointment to see these Doctors.  You’ll be very glad you did.

The Bad:
Difficult to believe the small nine year age difference between Ji-Hong and Hye-Jung