Captivating and compelling.  Those are the two best words to describe the 16 episode Kdrama Missing 9.  A private plane carrying beloved entertainment idols crashes into the sea and one lone person returns, four months later, with all memories of that time lost.  Sounds good, huh?

Five stars, along with some management, from Legend Entertainment board a swanky private plane for a special engagement in China.  During the flight, one of the engines catches fire and the plane crashes into the ocean.  Miraculously, several people make it to a deserted island alive.  Stress, discomfort, pain, and the threat of death hangs in the air as the folks on the island do their best to survive the horrendous situations thrown at them.  Some have high hopes, some only feel fear and depression but everyone wants to make it back home in one piece.  Trials tend to make or break people – some of the crash victims risk their own life to save others but one person has a dangerous side no one knows about, so dangerous, in fact, they are willing to kill anyone just to survive.

Jung Kyung-Ho plays the part of Seo Joon-Oh.  Once the leader of the band known as Dreamers, he fell from grace when he was in an accident and arrested for drunk driving.  He also shoulders the blame of a friend’s suicide.  Joon-Oh takes it upon himself to be the survivors’ leader, protecting them the best he can.

Baek Jin-Hee’s character is Ra Bong-Hee, Joon-Oh’s new stylist.  She was raised in a small town by the sea and has lead a humble life.  She trusts and supports Joon-Oh 100% and is always on his side.  The girl has a sympathetic heart and willingly puts others’ needs above her own, however, she has a tough side, too, and is quite tenacious.

Oh Jung-Se plays Jung Ki-Joon, Joon-Oh’s manager and friend.  He has been with Joon-Oh through all the bad publicity, staying by his side and trying to help rebuild his career.  Ki-Joon secretly likes actress Ha Ji-Ah and, although she is dating someone else, he looks after her, knowing she has health problems.

Choi Tae-Joon’s character is Choi Tae-Ho, who was a back-up member of the band Dreamers.  When the group disbanded, Tae-Ho became an actor.  He holds a lot of ill feelings towards Joon-Oh, blaming him for the break-up of the band and the suicide of their friend.  He wants fame and fortune and thinks only of himself.

Lee Sun-Bin plays Ha Ji-Ah, Legend Entertainment’s most popular actress.  Her mother has borrowed tons of money from the entertainment company, leaving Ji-Ah to pay them back.  She and Tae-Ho are secretly in a relationship.

Park Chan-Yeol plays the part of Lee Yeol, the third member of Dreamers.  He is too kind and forgiving to hold any bad feelings towards Joon-Oh, still respecting him and looking up to him as their leader.  After Dreamers split up, Yeol went solo.

Kim Sang-Ho plays Hwang Jae-Guk, CEO of Legend Entertainment.  He is respected, as the boss, by all of the people who work for him.  Although he is the CEO of the company, he is definitely not “survival leader” material.

Tae Hang-Ho’s character is Tae Ho-Hang, CEO Hwang’s personal secretary.  He may be big physically but his personality is quiet and reserved.  He respects his boss and wants to protect him even though he’s not the type to take the lead.

Ryu Won plays Yoon So-Hee, one of Legend Entertainment’s actresses.  She is paranoid, selfish, rude, negative and also blames Joon-Oh for their friend’s suicide.  Being stranded on the island has just made those character traits worsen.

Veteran TV director Jung Eul-Young is the father of lead actor Jung Kyung-Ho (Seo Joon-Oh).  At first he was completely against his son becoming an actor, so much so that Kyung-Ho left home, father and son not talking for three years.  I guess “time heals all wounds” because their relationship is fine now.  Kyung-Ho made his acting debut in a mobile drama called 5 Stars.  He’s been in many films and dramas over the years playing everything from a police officer to a serial killer, however, the man is a master at comedy.  He made me giggle in Falling in Love With Soon-Jung and I actually laughed while watching him in One More Happy Ending.  His comedic timing is spot on every time!

Although lead actress Baek Jin-Hee (Ra Bong-Hee) has been in films and dramas since 2008 I’ve only seen her in two other things – the yucky, pitiful romantic drama Loving You a Thousand Times and the great crime/thriller drama Pride and Prejudice (the last episode is rotten, though).  In this show they made her look so much younger than her 27 years.  Maybe it was her long hair compared to the short bob she sported three years ago as a prosecutor in training in Pride and Prejudice.

I decided to stick with just giving you information on this show’s lead actor and actress because if I wrote something about each of the nine major characters this review would have been way too long.

The relationship/chemistry Joon-Oh and Bong-Hee have is feel-good kind of stuff.  They play off each other perfectly – Joon-Ho loving to tease Bong-Hee and Bong-Hee emotionally strong enough to get back at him.  (Bong-Hee has never been inside a hotel so when they walk in, Joon-Ho slips off his shoes and tells her she needs to remove her shoes upon entering a hotel.  Bong-He looks embarrassed, bends over to take off her shoes but, instead, grabs Joon-Oh’s shoes and tosses them out the door.  So cute.)  Their relationship is so sweet.  I really wish the writer would have added a little romance and allowed them to kiss, at least once.

The plane crash is very impressive.  I’m guessing it was done with CGI but it definitely looks real.  I’ve, personally, worried planes I’ve been on would crash into the ocean, so that sequence was very unsettling to me.  As the passengers watch the water getting closer and close to their windows, my heart began racing.  And seeing that huge plane in pieces under the water… unbelievably frightening.

Does luggage float?  I had a problem with the fact that when suitcases were found the stuff inside them was dry and neatly folded.  Everything in my luggage shifts into a messy pile after I’ve been on a flight with a successful landing.  The survivors’ luggage being all dry and tidy was too much for me to not question.

I wish there had been more “stranded” episodes.  So many scenes on the island are tense and engrossing.  Once the show switches to Seoul it looses some of that intrigue.  Right alongside all the mystery and danger the writer allows us some stress free moments through comedy.  Yes, we smile and giggle a bit at the funny moments throughout the show – moments which always include Joon-Ho.

The story is told in flashbacks – flashbacks of what happened on the island as well as flashbacks of things that occurred before the plane crash.  The director helps us know the time frame of things by putting a black bar across the top and bottom of the screen during the flashbacks of time before everyone is stranded.

I had trouble accepting the ending, the very last scene.  The timing was off (years and years and years had passed) or justice was not served – one of the two.  Once again, I believe in forgiveness but embracing someone who killed my friends, framed me for it, and tried to kill me on several occasions… I just wouldn’t invite them to a painting party.

The soundtrack is small but good.  Chen from EXO sings my favorite song, I’m Not Okay.  Charted at number 21, it’s a beautiful song with Chen’s voice effortlessly going back and forth from a soft whisper to strong and powerful.  When My Loneliness Calls You, performed by Bae Jin-Yeong, better known as Punch, is the type of song I could fall asleep listening to.  Her voice is breathy, bringing a feeling of peace and comfort to the piece.  Brown Eyed Girls’ Gain sings Kiss or Kill, a strange piece that sounds like what the survivors must have felt like on the island.  It’s just a bit uneasy, off, not quite right – kind of dream-like.  The percussion is interesting.  It reminded me of a heartbeat.  Was that done on purpose or was my mind just hearing the similarity?

As for scenery, the island sequences are beautiful and quite varied.  Beauty is fine but I had a problem with the varied part. I’ve never been on a deserted island before, thank heavens, but the fact that the island’s scenery is so different bothered me.  There was a beach with a wall of black rocks; ragged, high cliffs; a wooded forest; a lush jungle; and a part that even resembled a prairie with tall, yellow grass.  How can one island have such vastly different landscapes?  Oh well.  It was all pretty to look at. 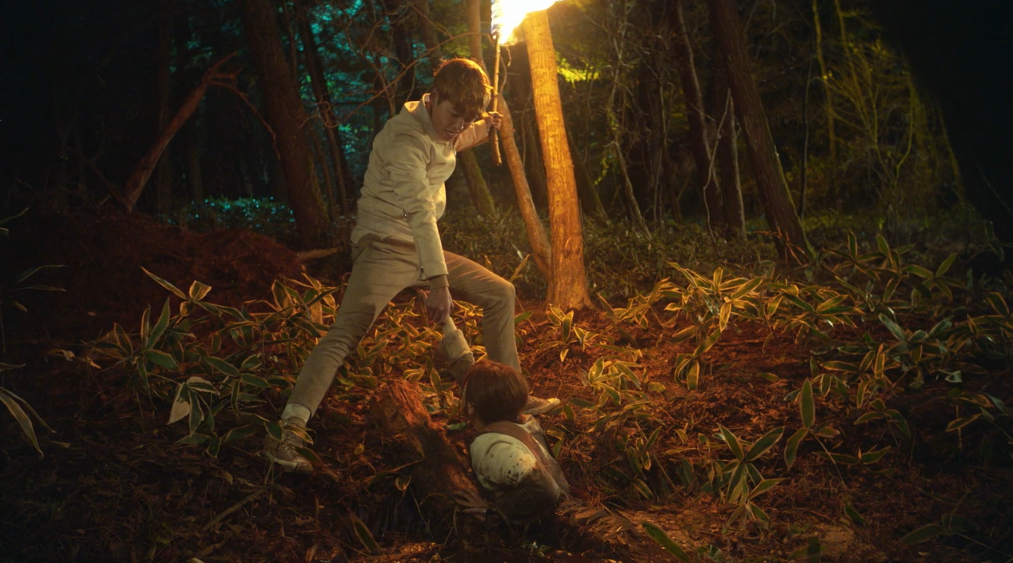 I couldn’t help but wonder just how helpful I would be to people stranded on a deserted island.  Would I risk my life to save someone else like Bong-Hee did?  Would I sit around and bemoan my fate like So-Hee?  Would I be a follower like Ki-Joon or a leader like Joon-Oh?  Missing 9 gives us a lot to think about, a chance to look inside ourselves and wonder who we really are.

The Bad:
Not enough island scenes
Events in Seoul went on too long