If you’re in the mood for a light, romantic drama, that’s not very long, I suggest Wednesday 3:30 PM. I’m not saying that’s when you should start watching a show, it’s actually the title of this drama. 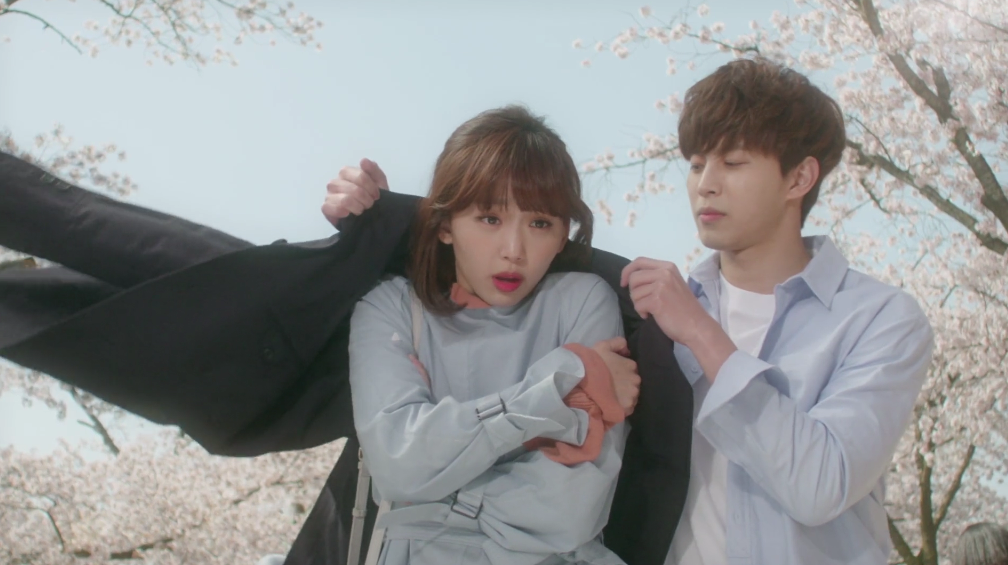 To quote Sun Eun-Woo, “According to the British Journal Daily Mail which did extensive research on modern lifestyles, it’s said that modern women age the most on Wednesday 3:30 p.m. It’s because the fatigue and stress of the week is at its peek on Wednesday 3:30 p.m. All women look old on Wednesday at 3:30 p.m.” And that’s exactly when Eun-Woo’s boyfriend, Baek Seung-Kyu, coolly breaks up with her in a coffee shop. It was a calm, “I don’t love you. Let’s break up,” followed by him leaving his ring on the table and walking away. Of course she was broken hearted but, thanks to her old pal Jae-Won, there just may be a way for her to win Seung-Kyu back.

Yoon Jae-Won decided to make coffee his career. He went to California and took classes that taught him all about it and now he’s ready to open up his own coffee shop. Gong Na-Yeon is a girl he met while in California. They used to depend on each other while studying to get their certification. Although their relationship is currently one of business, both hope for something more in the future – Na-Yeon tells her employee she’s selling Jae-Won her shop now but she’ll hand him her heart someday, and Jae-Won is determined to make his new coffee shop a success and tell Na-Yeon he likes her when she comes back from training.

Yoon Jae-Won and Sun Eun-Woo grew up as close friends but it’s been quite some time since they’ve been together. Although Jae-Won went to California for business and the two have been separated for a while, they pick up right where they left off when they accidentally bump into each other outside Eun-Woo’s house. On the same day, Jae-Won’s coffee shop catches on fire and Eun-Woo’s boyfriend dumps her. With both of their hearts hurting, they decide to renew their friendship by getting plastered together and spill their guts about their troubles. Since Jae-Won has no place to stay, drunk Eun-Woo invites him to move in with her, and he takes her up on the offer. When she wakes up the next morning she wants to kick him out but quickly changes her mind when he promises to help her win back the guy that walked out on her, if she allows him live there. An agreement is reached, and thus begins Jae-Won’s Wednesday 3:30 P.M. Project. Will his idea bring Seung-Kyu running back into Eun-Woo’s arms?

In May of 2012 Lee Hong-Bin, who plays Yoon Jae-Won, made his entertainment debut as one of the six members of the South Korean boy group VIXX. Two years later he debuted as an actor in the drama Glorious Day. In 2016 he played the second male lead in the Kdrama Moorim School. Jae-Won, in Wednesday 3:30 PM, is his first main lead role. He has a darling smile and I look forward to seeing him in more things to come.

Jin Ki-Joo, whose role is that of Sun Eun-Woo, began her entertainment career as a contestant in the 2014 Super Model Contest. Wednesday 3:30 PM is one of seven TV dramas she’s been in over the past three years. Her big screen debut is set for 2018 when she’ll play the part of Silver in the movie Little Forrest. Aside from acting she is also a singer. She even sings on this show’s soundtrack. Ki-Joo studied computer engineering at Chung-Ang University.

This Kdrama love story is packed with wonderfully fun romantic cliches – Jae-Won and Eun-Woon share some cotton candy at a park, Seung-Kyu plays the guitar and serenades Eun-Woo before giving her a bouquet of roses, Jae-Won buys Eun-Woo a puppy, Seung-Kyu wears a bear costume and gives Eun-Woo a necklace and a balloon, Jae-Won carries a wet and injured Eun-Woo on his back, and there’s a good kiss under some trees overflowing with cherry blossoms. This show definitely gets an A for romance.

The only complaint I have is that the writer let too much time elapse at the end of the show. You know what I mean, right? – like when there’s a scene change and we see the words “… Years Later” flash at the bottom of the screen. I didn’t mind that time had passed I just thought it was way too much time. Three months would have worked fine with this storyline. One year was just way too long.

I liked how Eun-Woo’s team decided to use the name Wednesday 3:30 PM for their new line of make-up. Quite clever indeed.

Wednesday 3:30 PM consists of just ten episodes, each one being 20 to 30 minutes long, so it’s not a major time commitment. It’s long enough to get the story told and not leave us dragging in irrelevance. We know just enough about the characters to keep our interest and want them to be happy, and that’s really all we need for this particular drama.

Jin Ki-Joo (Sun Eun-Woo) sings a song called Spring. The tune sounds exactly like something someone would make up as they were by themselves just relaxing or doing some mindless work. It’s cute and peaceful. Another nice song is I Just Want To. It’s a romantic sounding ballad sung by An Ye-Seul. Sadly, it’s one of those songs that have too much English that just isn’t completely coherent as part of the lyrics. Other than that, I really liked the song.

The scenery that stands out most in my mind is the giant daisy painted on the stairs next to Eun-Won’s house. It’s just beautiful, although I may be a bit biased since daisies are my favorite flower. There are a couple scenes where the characters are out by the cherry trees that are in bloom and it’s just exquisite. Cherry blossoms falling in a soft shower. Now that’s romance. There’s also a romantic fountain scene. This show has lots of nice backgrounds.

The next time you’re feeling old and ugly check a calendar and a clock. If it happens to be Wednesday 3:30 PM it just may be this Kdrama is on to something.

The Bad:
Too much time elapsed at the end