On AsianWiki it’s listed as a “TV Movie” but I’ve also read where others have referred to it as a drama so I’m going to side with the latter, call it a tiny mini-drama, and add Bing Goo (also spelled Binggoo) to my Kdrama reviews. It’s a time-traveling love story – you honestly think I could pass that up?

In South Korea, under Park Chung-Hee’s dictatorship during 1979, the length of a man’s hair and the length of a woman’s skirt was regulated by the government. It wasn’t unheard of for police to cut men’s long hair, right there on the street – honestly. And that’s where our story begins…

Would you be willing to die for the one you love? Go Man-Soo is, or more precisely, he’s frozen for love. As his young girlfriend is dying, Man-Soo passes out and magically begins to freeze into a mound of ice. After 37 long years he unthaws and, luckily, a kind young woman is there to get him to a hospital. But will she believe this stranger when he tells her he’s come from almost forty years in the past?

Go Man-Soo is a sweet man who delivered black bean noodles and sold newspapers to make ends meet until he was given a full time job painting movie and theater signs. One day, while painting a sign, he fell off a ladder and was taken to the hospital. It was there he met Yoo Shin-Young and fell in love at first sight. He is a true romantic who believes love should be like Romeo and Juliet – “You should only love one person (throughout your life).” He adores Shin-Young and promised, “Even if my heart stops, I will always protect you.” He’s not the type to run away when things get rough (like a man telling him to stay away from his daughter) but intends to spend the rest of his life with the woman he loves.

Yoo Shin-Young is a kind woman with an illness serious enough to be hospitalized. Thankfully, the doctors have finally told her she can go home. Although Man-Soo is ecstatic and sees that as a good sign, there might be something Shin-Young is not willing to tell him just yet. She realizes what a gem Man-Soo is, loves him dearly and wants him to be happy.

Jang Ha-Da is the young woman who finds Man-Soo as he is “thawing out.” Her father suffers from Alzheimer’s disease and is living in a care facility. She works as a bank teller during the day and at a convenient store at night to earn enough money to pay his medical bills. Ha-Da lives with her sympathetic younger brother who is a soldier currently working in public service.

Twenty-seven year old Kim Jung-Hyun is a hidden treasure. He’s only been acting since 2016 but has already been in three feature films, three dramas, and this tiny mini-drama (TV movie). His acting as a man who wakes up decades into the future is superb. The look on his face as he’s seeing “futuristic” things for the first time is fantastic. There’s fear, wonder, unbelief, excitement… we see all of it in his expressions. Go Man-Soo is a vastly different character from the one I saw him play just a couple months ago in School 2017. For him to have played both of them so well is a tribute to his acting abilities. I’m very anxious to see what he does next.

After seeing Boa perform on TV, Han Sun-Hwa, who had always dreamed of being an artist, decided she wanted to sing and dance instead. She was able to get on the talent show Superstar Survival, but was eliminated after five episodes and ended up right where she had begun, at home. She was accepted to Baekjae Art College but just days before entering she got a call from an agent and accepted an offer to become a trainee for TS Entertainment instead. In 2009 she debuted as a member of the girl group Secret and debuted as an actress a year later in the drama More Charming by the Day. In 2011 she was on KBS’s Idol Health Beauty Contest and, after being evaluated by professionals and chosen “the star with the healthiest and most beautiful skin” they said her skin appeared 10 years younger than her actual age! She has been The Skin House’s exclusive company model since 2013.

Bing Goo is the nickname Ha-Da gives to Man-Soo. It means “ice mound” and makes reference to the fact that he was frozen while time passed.

Although the show is only two hours long it’s not missing a single thing. They don’t rush the storyline and they give us just enough information about the characters for us to care about their happiness.

There’s not a lot of different songs throughout the show but what is there is very complimentary to the storyline. We hear the song A Man and a Woman from the 1966 French film of the same name. You’ll definitely recognize it when you hear it. We also get to enjoy the song Be My Baby made popular by the girl group The Ronettes in 1963, although the version in the show is performed by a man. There is, of course, lovely instrumental songs that play as background music which enhances the emotions in the drama.

The scenery, clothes, and hair styles of the 1979 scenes are excellent. They did a great job taking us back in time. (We’re you born then?) Watch for the scene where Man-Soo is at work and some people are painting the movie poster for the June, 1978 American feature film Jaws 2. It would make sense South Korea would have gotten it about a half year or so later, sometime in 1979. My favorite present time shot is when Man-Soo and Ha-Da take a cable car up to Namsan Tower. 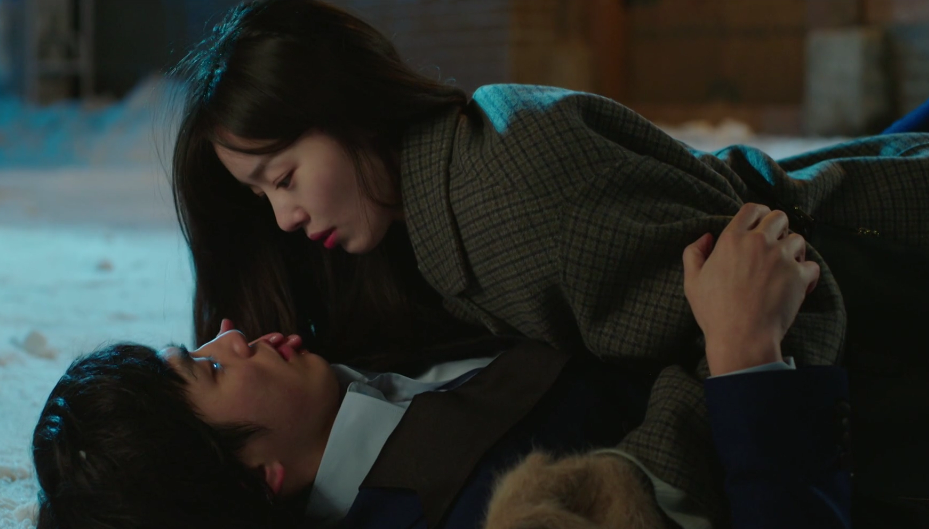 This fantasy romance has all the makings of a true love story – a kind man, a sweet girl, trials, perseverance, and self-sacrifice. Bing Goo is endearingly heartwarming, without a flood of tears.

The Bad:
Nothing bad here