If you like shows that deal with the law then you’re almost sure to enjoy the new courtroom drama Witch at Court (aka Witch’s Court). The story is all about the prosecutors who work in the Crimes Against Girls Unit. 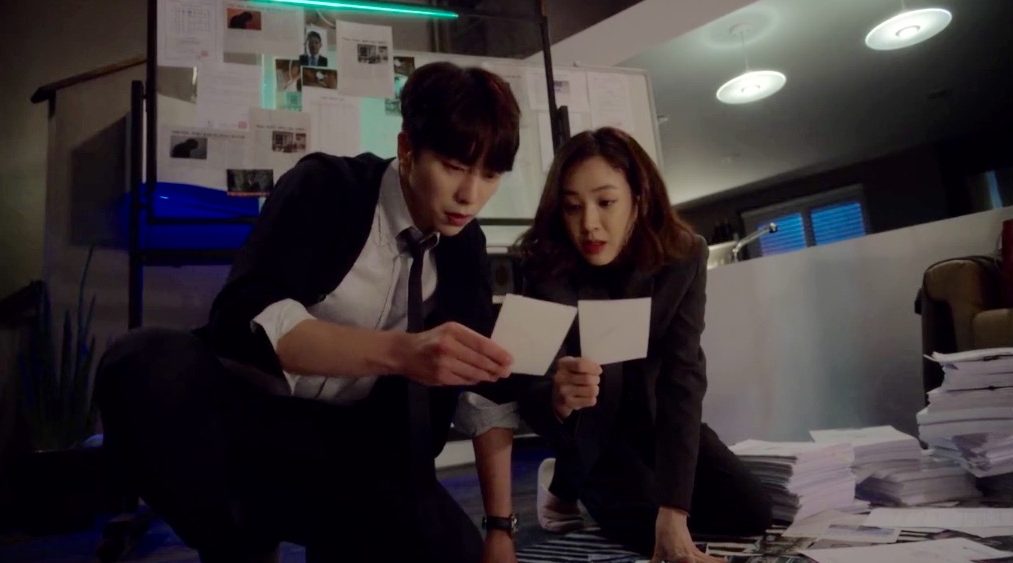 As a child, Ma Yi-Deum had dreams of becoming a doctor and making lots of money. However, when her mother goes missing and the police fail to find her, Yi-Deum decides to become a prosecutor instead, in order to track down her mother on her own. After seven years in that profession she’s made a name for herself as a tough, unfeeling prosecutor who only cares about winning the case she is assigned to, employing any method possible to achieve that goal. When Yi-Deum happens to discover a connection between her mother and the mayor, she’s determined to uncover the truth about what really happened so very long ago and make the person responsible for her mother’s disappearance pay dearly.

Prosecutor Ma Yi-Deum puts her all into what she does and expects to come out on top. She doesn’t always care about the victims as people, only thinking of them as cases she has to win. She wants to be the best which sometimes causes her to do some questionable things – she doesn’t break the law but does stretch ethics quite a bit. A decision she makes, having to do with a case she is assigned to, ends up being the reason for her transfer to the Crimes Against Girls Unit (CAGU). She doesn’t have much of a social life and her apartment is no where near as orderly as her career.

Yeo Jin-Wook is an intelligent man who followed in his mother’s footsteps and became a psychiatrist. However, he felt responsible when he was unable to help a young patient because of cunning attorneys and loopholes in the law. As a result, he gave up his practice, studied diligently, and became a prosecutor. His first year on the job he is assigned to the CAGU. Jin-Wook is passionate about helping the victims and making the criminals pay for their heinous crimes. With his background as a psychiatrist he makes a very understanding and compassionate prosecutor.

The evil guy in this drama, Mayor Jo Gab-Soo, isn’t psychotic, he’s just plain bad. Self preservation is his one and only goal. He wants power, prestige, pleasure, and money and doesn’t care who he has to step on or over to get it. He believes people are there for him to use and he does just that. Family, friends?… No one is safe from Mayor Jo.

Although the main plot is Yi-Deum and Jin-Wook doing everything they can to catch the man responsible for Yi-Deum growing up without a mother, the sub-plot is quite interesting on its own. Because Ma Yi-Deum and Yeo Jin-Wook are part of the CAGU the cases they deal with all have to do with sexual crimes. Don’t worry, though. We don’t see anything graphic. There are a handful of different people the CAGU prosecute, all interesting and varied cases – especially the one concerning the college professor and her male student. Just remember, if the subject matter happens to bother you, well, you’ve been warned.

Jung Reyo-Won, whose character is Prosecutor Ma Yi-Deum, was born in Seoul but moved to Australia when she was just ten years old. Because of some discrimination she faced as a child she was determined to become fluent in English and adopted an Australian way of life. She was an international business major at Griffith University and then became an exchange student at Korea University. While she was there she was, literally, discovered on the street and soon became a member of the Kpop girl group Chakra. Four years after it began Chakra was disbanded and Ryeo-Won went into acting full time. Her breakthrough came in the form of the drama My Name is Kim Sam-Soon, playing the gal who walked away from Hyun Bin’s character and then wanted him back. Her acting was great but I didn’t like the person she portrayed. However, I absolutely adored her in Which Star Are You From? She and Kim Rae-Won’s chemistry is superb. In 2007 she published Ryeo-Won’s Sketchbook which contains writings and art work about her Christian faith.

Yoon Hyun-Min, who plays the part of sympathetic Prosecutor Yeo Jin-Wook, was a professional baseball player, playing for both the Hanwha Eagles and the Doosan Bears over a decade ago. You might be wondering what happened to change his career path. Well, he fell in love with being on stage and decided to make acting his career instead. Two years later he decided to try his hand at the TV genre and appeared in Fun TV Roller Coaster: Season 1. Film was added in 2011 when he combined his old career with his new one, taking the role of a catcher in the baseball movie Pitch High. I have seen him in the dramas Discovery of Romance, Falling in Love With Soon-Jung, Beautiful Mind, and Tunnel. He just keeps getting better and better.

I think it would have been nice if the writer had thrown in a little more romance between Jin-Wook and Yi-Deum. Even though Jung Ryeo-Won and Yoon Hyun-Min were given (along with five other couples) the Best Couple award at the 2017 KBS Drama Awards, I wasn’t as impressed with their chemistry as I was with some of the others who received it.

Ma Yi-Deum has a very complex personality. She’s intelligent but not sympathetic. Her tenacity is something a good prosecutor needs but that winning-at-all-costs mind set is not. I’d certainly want her to represent me if I was on trial, though.

Witch at Court is a well made Kdrama. The show began with a 6.6% rating in the capital of Seoul and more than doubled that (14:3%) by the end of its 16 episode run. The directing is good and I enjoyed the slightly titled camera angles sometimes used for the bad guy scenes – a representation of how unstable Mayor Jo really is.

In my Thumping Spike 2 review I mentioned how well Jung Ryeo-Won cries, and she certainly came through for me in this drama. The gal is amazing. Her anguish seems so genuine, there’s no questioning whether or not her tears are real. And she doesn’t suffer in silence – we see her cry and we hear her cry. I’m sure she didn’t win the Top Excellence Award, Actress (for her portrayal of Ma Yi-Deum) simply for her crying alone, but I’ll bet it helped.

Let’s see… music. The soundtrack is okay. That You Loved Me, performed by Yoon Hyun-Min (who plays Prosecutor Yeo Jin-Wook) is my favorite song on the soundtrack. His voice is the main focus of the song with the instruments just backing him up – embellishing it, shall we say. It begins with a simple acoustic guitar and then gradually throws in some other instrumental sounds. It’s really nice. Leaning on the Wind comes in a close second, a lovely solo by EXID’s member Solji. So Chan-Whee sings the upbeat song that celebrates Yi-Deum’s sassiness, Born to be Free. I liked it at the beginning of the show but was a bit tired of it by the last episode.

There isn’t any wonderful scenery that I can remember. The only thing that stood out to me was the difference in Jin-Wook and Yi-Deum’s apartments. Side by side neighbors, the rooms are the same (just flipped) but looked nothing alike. Prosecutor Ma’s place is cluttered and just plain messy while Prosecutor Yeo’s is perfectly clean and orderly. The look on Yi-Deum’s face when she sees Jin-Wook’s living space is so fun. She puts her hands over her mouth to stifle a smile and her eyes light up in surprise, kind of like a little kid would react going through the gates of Disneyland for the first time. She seems to be marveling, asking herself, “You mean my place could look like this?” 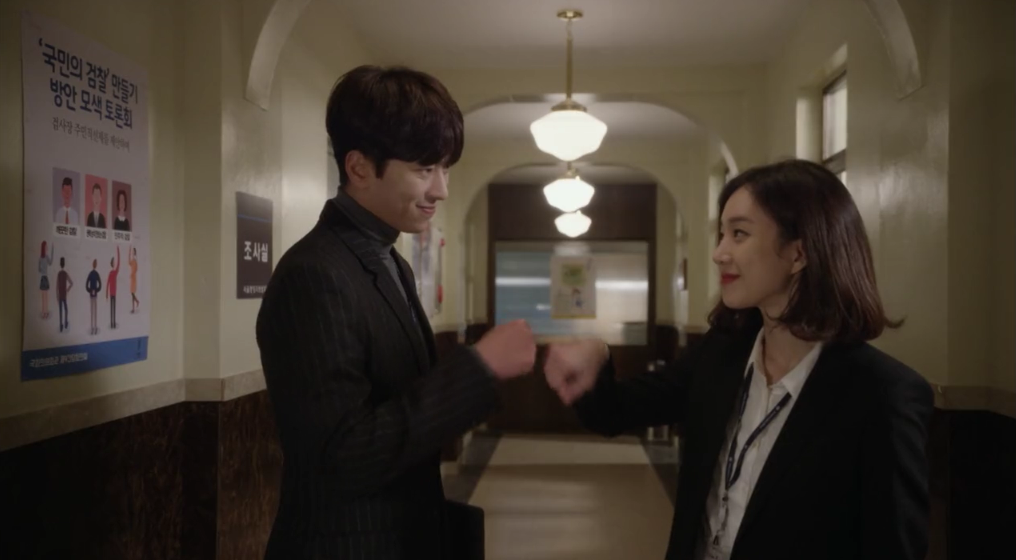 It was good to see Jung Ryeo-Won act again after nearly a three year absence from Kdramas. And the more I see of Yoon Hyun-Min the more impressed I am with his acting abilities. Witch at Court isn’t amazing, there’s really nothing about it you’d be anxious to discuss with a friend, but it is a decent drama that deserves to be on your watch list.

The Bad:
There isn’t anything bad, just nothing great