Have you ever seen any reruns of the old, Adam West, syndicated Batman show? In the few that I’ve seen Batman and Robin are always in tons of trouble and fighting off a host of bad guys but the writer takes the edge off the show by throwing in some light-hearted comedy. And they have this awesome music that pumps up the excitement – super hero music! Well, that’s what we get with the new Jang Keun-Suk Kdrama entitled Switch: Change the World (aka Switch). What are the odds that a con man and a prosecutor would look exactly alike? 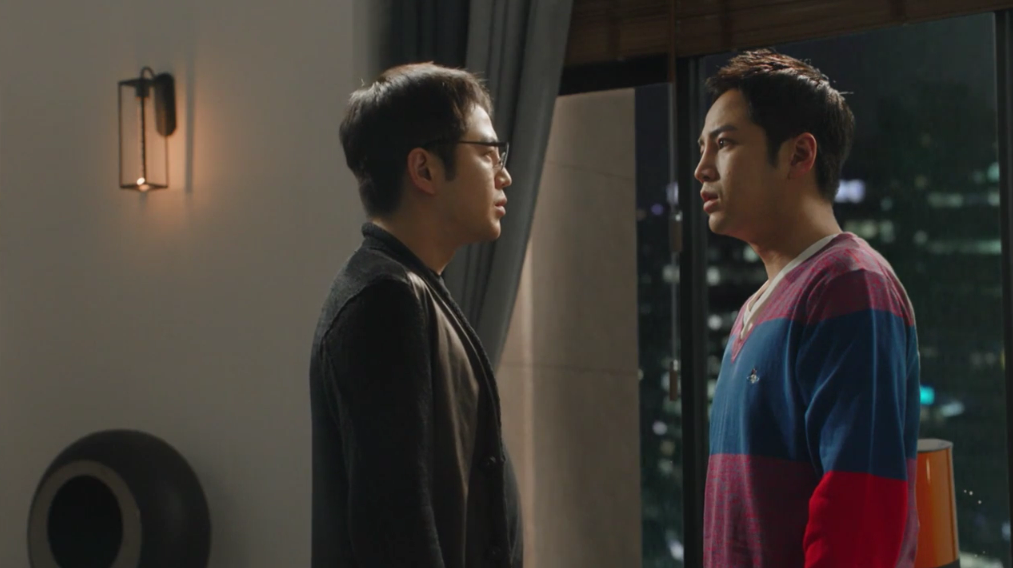 Prosecutors have been after the notorious drug dealer known as Brown Bear for quite some time with no success. Luckily, an informant has evidence that can identify Brown Bear but he refuses to give it to anyone but the only prosecutor he can trust, Baek Joon-Soo. To prevent that from happening, Brown Bear sends someone to make sure Baek is taken care of -permanently. But the evil deed doesn’t go as planned and Prosecutor Baek is rendered unconscious after the deliberate attempt on his life. When Prosecutor Oh Ha-Ra discovers a con man named Sa Do-Chan is a perfect doppelgänger for Joon-Soo, she blackmails him into posing as Prosecutor Baek just long enough to get the evidence on Brown Bear. Do-Chan isn’t about to go along with Prosecutor Oh’s ridiculous plan until he discovers the case has something to do with finding a man called Brown Bear. He eventually agrees to go along with the charade and obtain the evidence Prosecutor Oh so desperately needs but secretly, master swindler Do-Chan has some plans of his own.

Ever since he was little Sa Do-Chan’s dad had been grooming him to take over his highly honed craft – being a scam artist. However, young Do-Chan knew he didn’t want to follow that path. Instead, he wanted to be a prosecutor and warned his father that if he was still in that line of work when he grew up Do-Chan would throw him in jail. But fate had something else in store for him. He missed taking the bar exam in order to help out a friend and subsequently ended up earning a living the way he had been coached by his father. According to Sa Do-Chan, “… there are five steps to conning. Drop the bait, gain trust, stir ambition, cause them to do wrong, and wrap and run.” Do-Chan is a top of the line swindler but, much like that infamous outlaw Robin Hood, he only takes from the bad guys.

Being a prosecutor means everything to Oh Ha-Ra. She has a firm determination to catch the crooks, especially one really evil man nicknamed Brown Bear who is about to slip through her fingers. When she stands to lose a crucial piece of evidence that could put Brown Bear behind bars, she decides to do something totally unethical and illegal. Her boss, Yang Ji-Soong, is reluctant to go along with her idea at first but ends up becoming a co-conspirator after all.

Baek Joon-Soo is 100% prosecutor. He finished high school with very good grades and entered Seoul National University to study law. He passed the 54th bar exam and was part of the 44th Class for the Judicial Research and Training Institute. He goes by the book and has zero tolerance for those that don’t. Is there anything that could change the mind of this straight laced man? No one is aware of the fact that Joon-Soo is battling a heart problem that could very well take his life.

There are three people close to Sa Do-Chan that help him pull off his amazingly complex schemes…
Director Bong is the oldest of the bunch. He had plans to be a famous movie director but a tragic event changed that idea. He is a master of disguise and can morph into any kind of character the scheme calls for.
So Eun-Ji is the only female in the group. She left the nursing profession and would someday like to travel the world and write about her experiences. She has a major crush on Joon-Soo.
Jeon In-Tae is the tech savvy one of the group. He is more than proficient in anything having to do with computers and is an ace with all kinds of  spy-type gadgets.

There are lots of bad guys in this story but Brown Bear is by far the worst. He has no morals and has committed a host of despicable crimes all in the name of power and greed. He often sends his henchmen to do his dirty work but doesn’t mind getting his own hands messy now and then. Nothing is too low for evil Brown Bear.

This just might be the last Kdrama we see Jang Keun-Suk in for the next couple of years. He’ll be 31 years old (32 in Korea) in August of this year (2018) and he has yet to serve his mandatory military assignment. Speculation says he will be leaving us pretty soon, exchanging his acting costumes for a militaty uniform. Keun-Suk is famous for his handsome features, his face changing from looking like a 31 year old man to a five year old boy whenever he gives us one of his big smiles. His acting is perfect as both Sa Do-Chan and Baek Joon-Soo. If you want more information about Jang Keun-Suk you can read about him in more detail in my review of The Royal Gambler.

Han Ye-Ri, who plays Prosecutor Oh Ha-Ra, began her acting career in 2006 with the short film Passionate Sonata. For the next four years she would go on to be in several short, indi, and omnibus films. In fact, all of her awards have come from movies. In 2010 she took her first TV role in the drama Road No. 1, set during the Korean War. Her first starring role on TV was in the drama Hello, My Twenties! in 2016 followed by Hello, My Twenties! 2 the following year. Switch is the first thing I’ve seen Han Ye-Ri act in and I thought she did a fine job.

This crime drama could have played out with a dark, heavy feeling but screenwriter Baek Woon-Chul (who also wrote the Kdramas The Suspicious Housekeeper and Chilwu, the Mighty) lightens it up by making the group of swindlers into really good bad guys. Their “set ups” often hinge on making the person they plan to swindle look like a fool. But I guess that’s really what it’s all about – fooling people. We want these folks to get away with their crimes because they are so likable and down to earth. If people are intelligent enough to think up an elaborate plan, and talented enough to carry it through, I want it to work out for them. (It’s the same way I felt about the guys in the old Hollywood film Ocean’s Eleven.) If I could eliminate the possibility of serving time in jail/prison I would love to have the fun, creative, artistic career of being a swindler!

I had no trouble staying awake while watching Switch. There isn’t any lag time at all as the storyline goes from one elaborate scheme to another. One thing I enjoyed about this drama is that the mysteries don’t stay hidden for long. I wondered for a bit and then was given the answer long before I was tempted to pull out my hair.

This show is cleverly written, and well directed. The actors are convincing in their roles and the characters are enjoyable. I loved watching Jang Keun-Suk bounce from no nonsense Prosecutor Baek Joon-Soo to playful con man Sa Do-Chan. Although they look exactly the same, their personalities are nothing alike and Keun-Suk plays both characters very well. Wouldn’t that be fun for him to earn a Best Actor award for his role as Do-Chan and a Best Supporting Actor award for his Joon-Soo role?

In my opening paragraph I mentioned Switch’s music because it is such an intricate part of the show, in my opinion. The song entitled Crazy, performed by Teen Top, is exactly what I ment by super hero music. It’s fast, energizing, and is just perfect as a con man’s theme song! The rest of the songs on the soundtrack are ballads – No One sung by Soya, Raise Me Up performed by FT Island’s Lee Hong-Gi, Stars of the Night Sky performed by Naeun and Jinsol from the group April, and Blow My Mind sung by Kim Ki-Ryun, all of which are absolutely beautiful and could strongly stand alone as singles outside a soundtrack.

Sa Do-Chan and his little band of merry men (and one lady) stay in amazing houses which serves to show us how successful this group of swindlers is. They aren’t low-life criminals who hide out in grungy, dark places. On the contrary, these folks are classy, top of the line, upscale confidence tricksters. 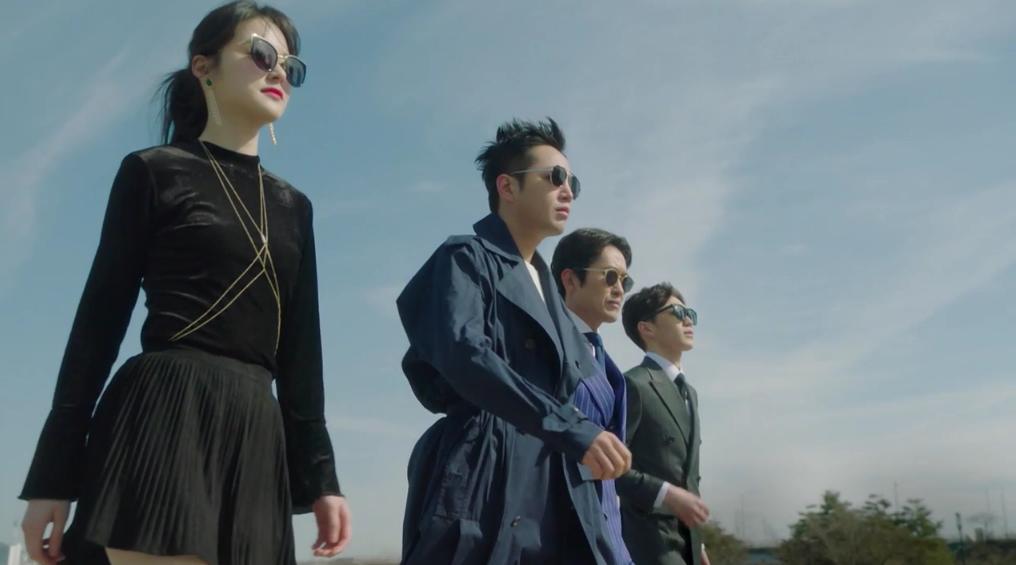 Thankfully, Switch: Change the World has one of those endings that is just perfect but also sets things up for a sequel, which I hope will happen the minute Jang Keon-Suk gets back from his military assignment. I really enjoyed Switch and think you will too.