At the end of 2016 I read that Park Hae-Jin was scheduled to be in a kind of bromance Kdrama entitled Man to Man, which was set to be released in the spring of 2017, so I immediately put it on my watch list. Sadly, that’s where it stayed because Netflix had purchased exclusive international broadcasting rights to it and I did not have access to that particular service. But thanks to my friend who gifted Heart & Seoul with a Netflix subscription a few months ago I just finished Man to Man and it was excellent! 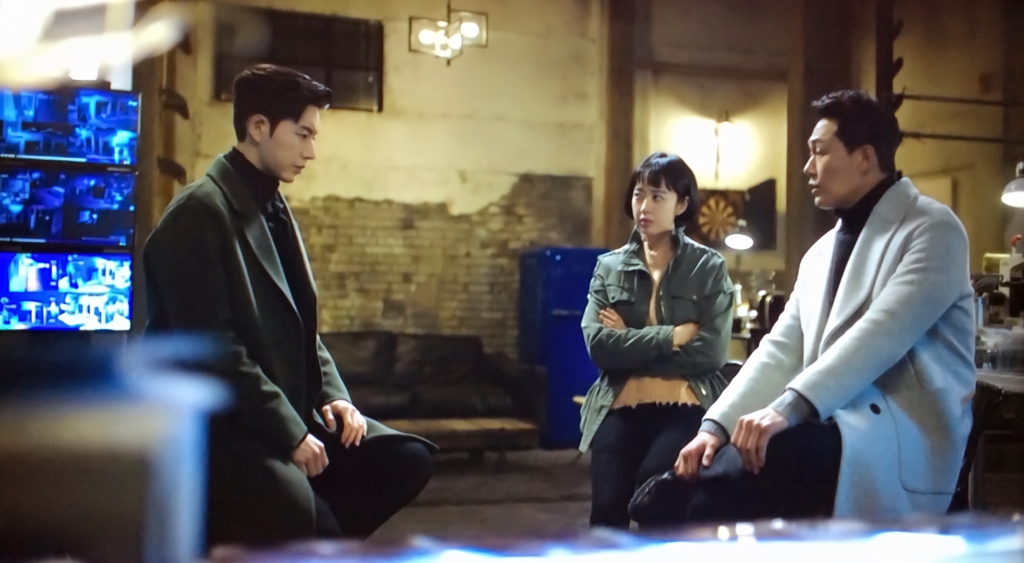 “There are three types of South Korean secret agents – White, which operate publicly with their own names. Black, which operate nameless and in the dark. Then there’s Ghost, which are planted more deeply with false identities and operate discreetly.” – a quote from Man to Man

NIS agent Kim Seol-Woo has just received a new assignment which will lead him to uncover a lot more than he had expected. Before his mission is complete he’ll have to outwit a rogue Ghost agent and find the traitor in the NIS organization. To accomplish his goals he has to adopt the disguise of bodyguard to a top Korean movie star. Seol-Woo is one of the agency’s most accomplished agents and things have always gone according to his plan but he has a bad feeling about this mission.

Kim Seol-Woo is Ghost agent K – a shadow without a name or reputation. He is a level six agent with the National Intelligence Service, operating internationally, with only the upper tier of the agency knowing who he is. It’s been said that seducing beautiful women is his specialty. In fact, he believes, “Love is a useful deception and tactic to a secret agent.” However, real love just may turn out to be his greatest weakness.

Yeo Woon-Gwang began his film career as a stuntman, rose to fame through action movies, and is now a huge star. He is most famous for his role as the beloved villain Dark Death. However, in real life this actor hides a broken heart. Woon-Gwang is not just a civilian he’s a reconnaissance Sergeant first class and has a collective eight degrees in various martial arts. Guard Kim refers to him as the V.I.P.

Cha Do-Ha has always been a huge Yeo Woon-Gwang fan but now she’s much more than that. She works for his management company as his personal manager. Although she has a huge crush on him he thinks of her as a little sister. She has an estranged relationship with her conman father who is serving time in prison, once again. At first she dislikes Guard Kim but her feelings begin to soften towards him as he uses his special agent “love deception” tool on her.

Song Mi-Eun is a former Miss Korea and actress. That is how she met and fell in love with Woon-Gwang, however, she left him to marry Mo Seung-Jae, a third generation conglomerate head. She’s a realist who uses her beauty and charm as a weapon for protection and defense. She was an orphan and survival is her top priority.

Mo Seung-Jae is the owner and CEO of Sangsan, “a young prince in a greenhouse.” He needs three specific wood carvings to accomplish his evil ambition which he hides behind his charming smile. His grandfather was known as a king maker and now that the old man is dead, Seung-Jae has decided to be king, himself. He has no problem using people to get what he wants. Although he loves his wife he knows she still has feelings for her first love, actor Yeo Woon-Gwang.

While reading about Park Hae-Jin, the actor who plays Ghost Agent K, I became more and more impressed with his character and abilities. The guy is quite impressive. He began his entertainment career in 2006 with the weekend drama Famous Chil Princesses and won the Best New Actor award for his performance. Wow, an award right out of the gate. After being in a couple other successful Kdramas he was snatched up and cast in the Chinese drama Qian Duo Duo Marry Remember which earned him the Asia Star Award in 2012, making him the first Korean actor ever to receive the award! After starring in two other Chinese dramas his popularity was such that a cinema screen in China was named after him! Back in South Korea he starred in Seoyoung, My Daughter which was the highest-rated Kdrama in 2013. In 2016 he starred in the Kdrama Cheese in the Trap and reprised his role in the film adaptation earlier this year (2018). Get a load of these accomplishments – he earned the Male Actor of the Year Award, he was the first Korean to be on Chinese stamps that are released as both regular issue and limited edition, a waxed figure of him is at Madame Tussaud in Hong Kong, he’s a shoe collector and admits to owning 1,800 pair of footwear, he’s been an ambassador for a non-smoking and non-drinking campaign, and since 2011 his charitable contributions have earned him the title “donation angel” throughout the entertainment industry (donating over 1.5 million U.S. dollars both locally and internationally). A few months ago he and his fans planted over 6,000 trees in Western China as part of a campaign to reduce fine dust. The guy’s incredible!

Park Sung-Woong, whose character is actor Yeo Woon-Gwang, began his acting career in 1997 with the motion picture No. 3. He stayed in the film genre until 2002 when he appeared in his first TV drama Sunshine Hunting. In 2007 he was cast in the Kdrama The Legend alongside actress Shin Eun-Jung, who played his love interest in the show, and they were married the following year. In 2014 he won the Actor Best Dresser Award. He was also given the Special Acting Award, Actor in a Genre Drama for his portrayal of a good guy/bad guy lawyer with a 100% success rate in the drama Remember.

The part of Cha Do-Ha is played by 36 year old Kim Min-Jung. Her acting career began in 1988 when at the age of six she was in the MBC Best Theater episode entitled Widow. She was actually one of the most praised and in demand child actresses of her generation and is one of the few child actresses that transitioned well into adult roles. She’s been in 13 films and 45 TV dramas. She must have a decent voice because she sang on the soundtrack of the 2009 Kdrama she was in entitled Strike Love. Over her long career she has earned nine acting awards.

Agent K’s first assignment is to obtain three wood carvings. One is in the private art collection of an important Russian gentleman, the second is at a Black Auction, and the third has yet to be located. In order for him to be admitted into the auction he first has to locate and gain possession of a particular ring. Each wood carving hides a special key necessary to expose Songsan’s (a major conglomerate) slush fund and destroy Baek’s Infantry (a band of bad guys). However, things get complicated when Agent K discovers a traitor in the NIS. Who is it and will K be able to expose and catch him?

This story is chock full of twists and turns, puzzles and riddles that you can try to unravel before Agent K does. Guess and then guess again because things aren’t always as they seem. However, the show isn’t all action and intrigue. There’s a wonderful love story woven throughout the spy theme. It’s fun to watch the relationship between Guard Kim and Do-Ha develop romantically. Most of the kisses are stiff and without genuine attraction but there is one near the end of the show that is quite yummy and exudes affection. Along with the added romance the writer throws in lots of fun comedy to lighten things up and make us smile. Great idea.

Lee Chang-Min does a fantastic job as Man to Man’s director. The camera angels, split screens, double takes, slow motion, flashbacks – everything is first rate and serves to add polish and expertise to his artistic craft. Wow! And there isn’t a single “oops” in the entirety of this spy drama, at least not one I caught. Lee Chang-Min has been directing (or an assistant director) for 13 years now and involved in dramas such as Remember and Birth of a Beauty.

Kim Won-Seok, Man to Man’s amazing screenwriter, was also the second writer on the hit Kdrama Descendants of the Sun.

The action sequences in Man to Man are fabulous and were choreographed by Park Jung-Raul, the chief stunt director for the 2010 action thriller film The Man From Nowhere.

I need to mention how fun it was to have cameo appearances from two superb actors, Namgung Min who plays an actor and Song Joong-Ki who plays the part of a banker.

The majority of Man to Man’s soundtrack is pretty good. Mamamoo sings Open Your Heart, a great upbeat song with some rapping in the middle of it. However, the vocal is much to loud and overpowers the music. Songs need a balance of sound and this one doesn’t have it. I wasn’t thrilled with The Reason, mainly because I don’t care for the singer’s (Huh Gak) voice. But I really enjoyed the instrumental version of Veomance’s Full of Wonders. You ought to give the soundtrack a listen. The music fits the drama perfectly.

Agent K’s hideout is an old abandoned building that has a secret room where all his spy gadgetry is located. He also has two old arcade-type game consoles there which gives the place flavor – all the best and newest technology set among old toys. Also, the scenery is unique in that there are parts of the show that were filmed in Budapest Hungary. 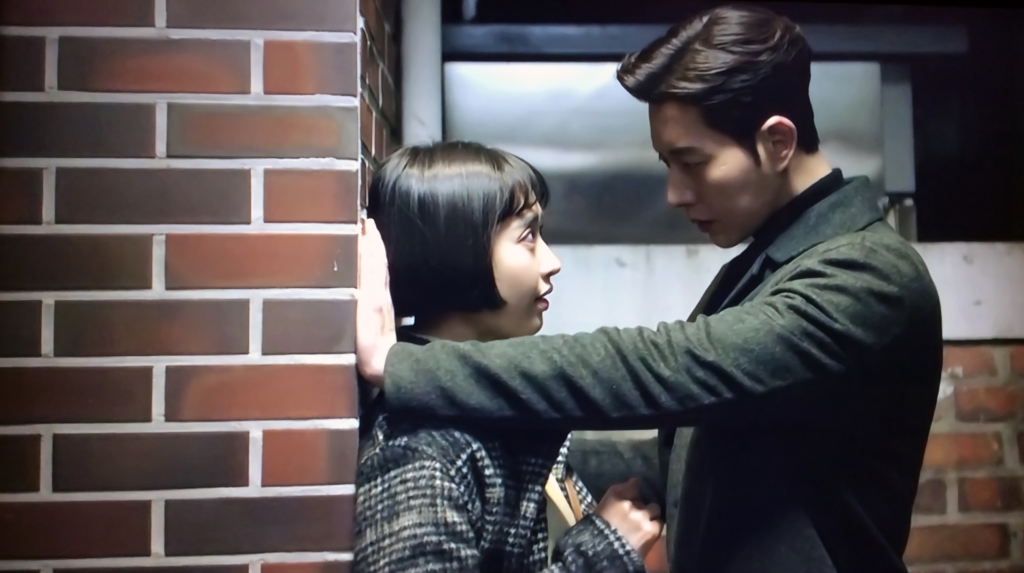 Man to Man is a well put together spy drama that holds our interest every minute of its 16 hours. It’s not difficult to follow but just puzzling enough to keep us hooked. In fact, it’s just as good as, if not better than, the many James Bond movies out there. Give it a try. It’s great.

Oh, as for Ghost Agent K –
“His fight never ends. Because the world is wide and there are many villains.”

The Bad:
Only one great kiss