I decided to get out my 2017 list and go through it in order to find something  I hadn’t seen yet, and eventually chose Strongest Deliveryman. Yep, it’s a year old but after being so impressed with Go Kyung-Pyo’s acting in Cross I decided I wanted to see what he’s like in this. 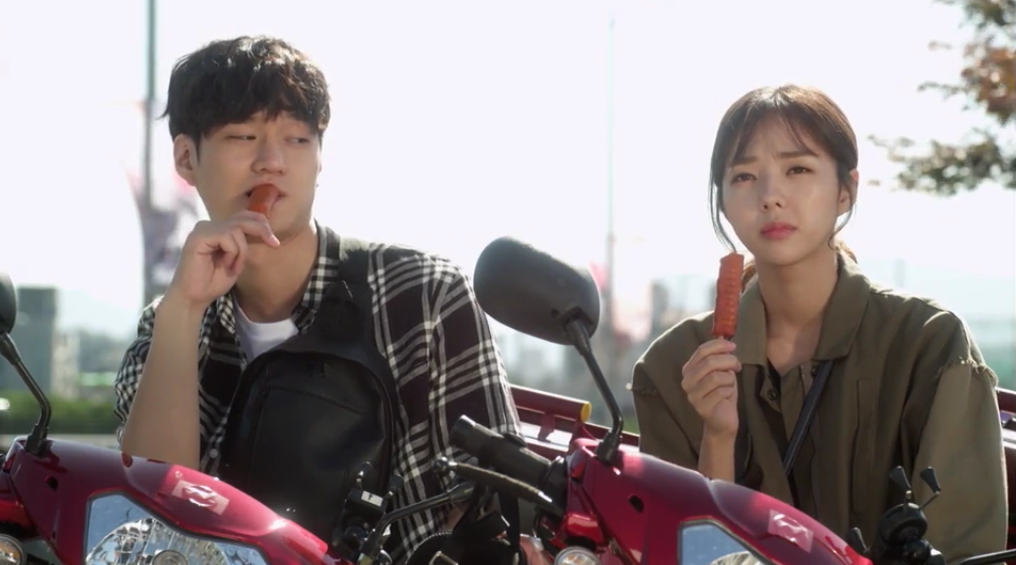 When Choi Gang-Soo’s father dies he decides to roam around Seoul in search of his run away mother, only spending two months in an area before moving on to the next. She left him with his father when he was a tiny boy and now that he is on his own he’s determined to find her and tell her about how his father lived and died and the grief the man endured as a result of her leaving. Being a deliveryman is an ideal job for a person who wants to move around a lot and after five years of making deliveries, Gang-Soo is one of the best. He secures a new job at Lively Handmade Noodles, “unquestionably the best noodle house in the outskirts of Seoul,” and begins his normal two month stay, delivering food. However, the other delivery person there is a rude, physically abusive young woman named Lee Dan-Ah and she’s determined to make things as difficult for Gang-Soo as she possibly can. When the owner of a large restaurant chain decides to move into town the tiny mom and pop eateries begin to suffer. With the aid of his deliveryman buddies, Gang-Soo decides to take on the giant Jung Family Foods and help the small restaurants fight for their lives.

Before Gang-Soo’s father passes away from a bout with cancer he fervently admonishes his son, “You have to be a good person in life,” and Gang-Soo takes that message to heart, receiving five certificates for being a brave citizen – he caught 3 hit-and-runners, saved an elderly person from a fire, and caught a robber! Dan-Ah sees his helpfulness as being nosy but when Gang-Soo sees an injustice he’s not the type of person to just look the other way. And those good deeds have not gone unnoticed. There’s always a host of people ready to back up Gang-Soo whenever the need may arise.

Twenty-five year old Lee Dan-Ah can’t wait to leave South Korea, or “Hell Joseon” as she calls it. She comes from a family who has struggled financially all of her life and she sees no way out of a life of poverty except to immigrate to another country. She studied vigilantly and her high grades helped her get accepted to Hanin University but family circumstances dictated she start earning money right away and the promise of a higher education is now just a sad memory. Like Gang-Soo, she too has been a delivery person for the past five years. Dan-Ah is highly skilled in the art of Taekwondo.

Oh Jin-Gyu isn’t a bad guy. Because his self-esteem is non existent he choses to dull the pain of a broken heart with fake happiness in the form of frivolity. He’s able to gather a bunch of people together to cheer him on when he races his cars, but not a single one of those so called friends would ever come to his aid. His lack of business drive has disappointed his father to the point of him actually telling Jin-Gyu that he wished he would die. In order to get out of a terrible situation he has to pretend to be interested in Lee Ji-Yoon even though he likes Dan-Ah. He learns what true friendship is when he meets Gang-Soo.

When Lee Ji-Yoon is told she is being sent abroad to study and while she’s away her mother will choose a husband for her, she bolts and at the age of 23, runs away from home. Of course Gang-Soo comes to the aid of the runaway, giving up his own room so she can have a place to sleep indoors for a few days, which makes her fall in love with the kind-hearted man. Independence means so much to Ji-Yoon that she turns her back on her family’s money and life of ease, takes a part-time job at a coffee shop, and secures a tiny dorm-like room to live in.

Because I’ve written about three of Strongest Deliveryman‘s four main actors/actresses in other reviews I’ll just send you to those instead of repeating what I’ve already done.
To learn a bit about Go Kyung-Pyo, the actor who plays kind-hearted Choi Gang-Soo, you can go to my Cross review.
You can find information on Chae Soo-Bin, the gal who plays the part of Lee Dan-Ah, at my I’m Not a Robot review.
And to read about Kim Seon-Ho, the person who plays Oh Jin-Gyu, you can click on my Two Cops review.

Aside from a small part she had in The Time That I Loved You, 7,000 Days this is the only other thing I’ve seen with Go Won-Hee in it. She started her entertainment career in 2011 as a commercial model, becoming the youngest Asiana Airlines model ever. Her first acting job was in the 2011 motion picture A Sailor Went to Sea and from there she went on to accept roles in music videos and TV shows. In 2015 she became a cast member of the comedy sketch TV show Saturday Night Live Korea. I know I’ll be seeing her again soon because she has a supporting role in the new Kdrama Your House Helper, which is on my watch list. I loved her character in this drama much, much more than the leading lady’s role. She is just darling as Lee Ji-Yoon for which she earned the Best New Actress award.  In fact, that’s the only award this drama won.

Choi Gang-Soo is such a sweetheart, it’s just plain impossible not to love him. Dan-Ah, on the other hand, was very difficult for me to like. Gang-Soo’s life hasn’t been any less difficult than Dan-Ah’s but their attitudes are miles apart. He is friendly, personable, kind, and cheerful. She is closed off, arrogant, rude, and finds fault with just about anything. I really disliked how Dan-Ah instantly turned her frustration into something physical. She hits, kicks, twists arms… to get her point across. She’s that way with people she knows and total strangers. And she’s verbally abusive as well. I think Korean dramas refer to those type of women as “sassy girls” but I think a better description is “jerk”. I’m baffled as to how any guy could be attracted to a woman who so easily physically and verbally abuses him… but, to each his own.

Although Oh Jin-Gyu and Lee Ji-Yoon are supporting characters they show more character growth than the leading man and woman. It’s inspiring to see two people turn their backs on their life of privilege and embrace a dream. These born-into-money people take a careful look inward, realize they aren’t truly happy, and make adjustments to their thinking – a good lesson for us all.

Another good lesson we learn is to stop making excuses. Gang-Soo’s father tells him, “You have to be a good person in life. Just because you don’t have a mom or dad don’t become hardened and cold.” Gang-Soo could have easily closed himself off from the world when his mother left him. He could have told himself something like – my mom never wanted me and my dad was a penniless man who died longing for the woman he loved. I’m all alone in life and not worthy of someone’s love. There’s no hope for me financially. Life stinks. – but he chooses to go with what his father tells him and use his life to help and serve others. A much better attitude than the one Dan-Ah possesses.

Strongest Deliveryman’s soundtrack is quite large – 13 songs – but I’ll mention just a few. Go Kyung-Pyo, who plays Gang-Soo, sings a darling little song called Lalala. Jang Jae-In whispers the song Must Have, a very soft and slow song. Almost Love is a fast song performed by Vanta. Kim Chaewon sings Kisum, a wonderful song that has rapping in it and Shin Jae sings Can You Hear Me Now.

Because this drama’s focus is on lower income people the backgrounds in this story are quite humble. Shops and homes are clean but certainly not fancy. Since the Lively Handmade Noodles shop is where the main character lives and works it is the most significant backdrop in the show. In closing, I have a message for you from Gang-Soo’s father – “Live life being a good person.” I can’t think of a better motto to live by.