The Hymn of Death (aka Praise of Death, He Hymn of Death, and Death Song) which is based on the life, love, and death of Kim U-Jin (a Korean poet and playwright) and his sweetheart Yun Sim-Deok (Korea’s first soprano) is one of the most emotionally stirring short dramas I’ve ever seen. The perfect way to begin a new year of reviews on Heart & Seoul is to kick it off with a drama worthy of a perfect 10 and The Hymn of Death is that 10! 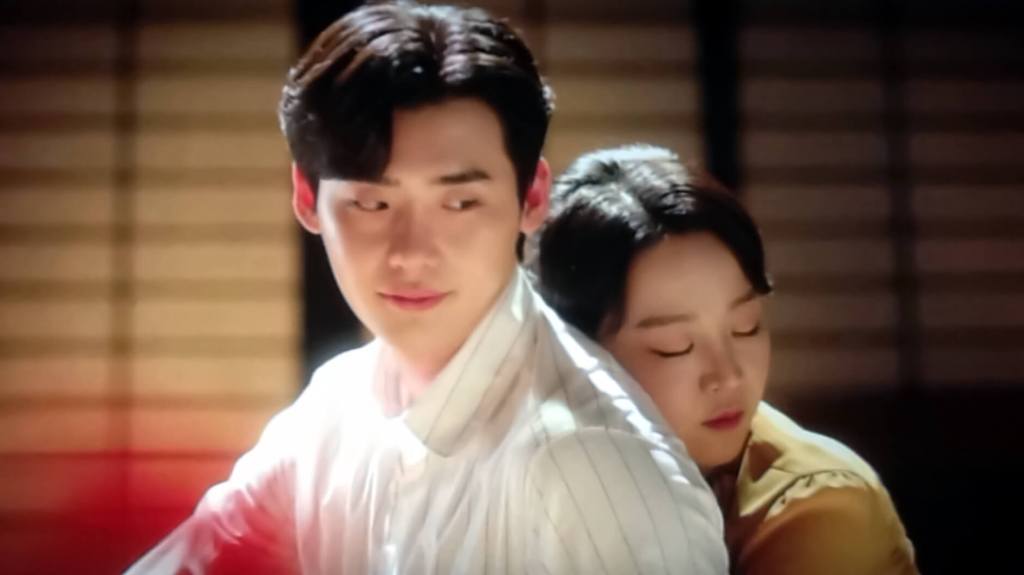 While scrolling through Netflix I noticed a picture of Lee Jong-Suk crying and decided to find out what drama it was. The synopsis sounded like the show would be an interesting love story and since the drama was only three episodes long I decided to check it out. I could always turn it off if it was boring, right? “This is a work of fiction based on the lives of Kim U-Jin and Yun Sim-Deok. Some parts of the drama may be different to actual events,” is what flashed across the screen the second the show started. Now I was curious. Next came, “August 4th, 1926, 4:00 A.M. Deoksuhwan Ferry,” and, with two pair of shoes neatly placed together by the ship’s railing and a sailor frantically blowing on his whistle, it gave the impression a man and a woman had just jumped from the boat. I was hooked!

Since the drama is only three hours long I’m only going to give you a very brief synopsis of the plot.
In 1921 while studying English literature at a university in Tokyo, Japan, Kim U-Jin begins an acting association made up of students from Joseon (Korea). Its purpose is to build a hall, promote new plays and Western music, and enlighten the people of Joseon. He tells the performers, “Our country is being trampled on, but I want to show that our spirits are still alive in the form of a play.” One of the actors in the group recruits Yun Sim-Deok, a student studying Vocal Music, who joins the troupe as a singer. Her first impression of the leader, U-Jin, is not good but gradually the two come to respect and eventually love each other. The rest of the story tells of their relationship, a love that refuses to allow others the power to tear them apart.

For information about Lee Jong-Suk, the actor who plays Kim U-Jin, go to my review of While You Were Sleeping.

Yun Sim-Deok is played by Shin Hye-Sun whose acting debut came by way of a minor role in the Kdrama School 2013. From there she went on to bigger roles in dramas such as Oh My Ghostess and She Was Pretty. But her big breakthrough came with her role in Five Enough for which she won her first acting award – Rookie of the Year. Later she would win her second, third, and fourth awards all for her acting in the serial drama My Golden Life. She has appeared in two music videos, two short films, two feature length movies with another set to be released this year (2019), and 12 Kdramas along with One and Only Love which should be aired fairly soon.

The Hymn of Death is set during the same time as Mr. Sunshine and Chicago Typewriter – the country of Joseon is occupied and being ruled by the Japanese. As I watched this show I couldn’t help but think of the other dramas. “These real people were around at the same time Seo Hwi-Young, Ryu Soo-Hyun, Shin Yool, Captain Eugene Choi, and Go Ae-Shin were fighting in the resistance,” I told myself. It kind of made those fictional characters seem a tiny bit real.  And to give that idea a little boost, the dance hall/club where Kim U-Jin’s drama troupe went to celebrate after their last performance of the tour is a place called Carpe Diem which just so happens to be the name of the dance hall/club Shin Yool owns in Chicago Typewriter.  I recognized it instantly.  The inside and outside of the building looks exactly the same in both dramas.  Cool, hugh?

I don’t know what type of relationship Kim U-Jin and Yun Sim-Deok had, and according to the internet no one really knows, so I’ve chosen to believe this drama’s version. The Hymn of Death shows their love to be a sincere, pure love – nothing smutty or lustful – so that’s what I’m going with. I’m sure he loved her in part because (in the show) she was the only person close to him that encouraged his passionate desires. She buoyed him up and gave him courage and praise for what was so very important to his happiness – writing. He dearly wanted to be a part of the resistance through his plays and the acting troupe. At one point in the show his father tells him, “You are the successor to our business.  Quit fooling around writing literature and being a patriot.” Another family member follows that with, “Please do not forget your duties as a son.”  Contrast those statements to what Sim-Deok tells him, “U-Jin, pick up your pen again.  I’m fond of your writing, you see,” and “It’s fine even if we can’t change anything. The fact that we’re trying something with hope is what matters.” Of course he would love Sim-Deok, the woman that encouraged and supported his goals and dreams.

After the show was over I decided to check the internet to see what I could find out about these lovers. Since the show made the disclaimer, “Some parts of the drama may be different to actual events,” I was curious as to just exactly what parts were different. I encourage you to, after you’ve seen this drama, read a bit about their lives, as well. I’m not going to reveal parts that might ruin the show for you, but here is some interesting stuff I found…
The two met while in Japan. Kim U-Jin was perusing a career in drama while majoring in English literature at Waseda University. U-Jin formed a drama troupe and went on tour where he came across Yun Sim-Deok, teaching at the Ueno Music School. Mr. Kim was from a rich landowner family while Miss Yun came from a poor but humble background. She secured a government grant that allowed her to study in Tokyo. Sim-Deok was known for her beauty as well as her voice. She went back to Joseon and tried to become a classical singer but ended up becoming a pop singer and actress because her home country just wasn’t ready for Western classical music. Mr. Kim is remembered as a “pioneer of Korean drama.” It was said that his passion for writings and plays was boundless. He is considered the first playwright and professional literacy critic in the history of Korean literature. He was also a poet and essayist. Three days before her death Sim-Deok recorded, in Tokyo, the song In Praise of Death (also called Death Song) which sold a record 100,000 copies following the announcement of her death. Their double suicide created quite a stir back in Joseon and “many young Koreans followed the couple’s path.” After their death, rumors circulated that the couple was actually in Italy, running a music store, but soon those rumors died down.
This information was taken from three different articles –
(http://mengnews.joins.com/),
(http://cejsh.icm.edu.pl/), and
(https://wikivisually.com/)

I have no idea whether or not Shin Hye-Sun really sang the songs her character (Yun Sim-Deok) performed. My guess is she didn’t. I only think that because, as perfectly as her mouth/lips fit with the words of the song, her throat didn’t vibrate at all. It really doesn’t matter, though. The voice we hear is exquisite. The soundtrack only has three songs, all ballads and all sung by sopranos. My favorite is Stay With Me performed by Song Haye. I like it best because it’s more calm, more quite, just a better song for a tragic love story. The other two songs are Only My Heart Knows sung by So Hwang and Falling in Love performed by Heen. Both are very pretty. Just a bit of information – if you’re at all interested you can hear the real recording of Yun Sim-Deok singing In Praise of Death on YouTube. It’s not great quality but the recording is just a decade shy of 100 years old!

I was very impressed with the 1920s backgrounds in this show. Everything looked authentic, including the ferry/ship the couple use as their platform for a tragic goodbye. The clothes, hair and makeup are perfect in keeping with the story’s time frame. The contrast between Sim-Deok’s and U-Jin’s homes is like night and day. He is from a wealthy family so his huge house has the most up to date things while she, being from a poor family, has a tiny old house.

I want to end my review of The Hymn of Death with some lines shown in the drama which were penned by the real Kim U-Jin. Pay close attention to the dates and remember he met Yun Sim-Deok in 1921 and they committed suicide together August 4th, 1926.
From the November 26, 1921 entry of his journal, Trace of the Heart – “Passionately, I listened to the curses put on my fate. She was the only safe haven in my life besieged by the devil.”
From Leaving Home (his award-winning literature) June 21, 1926 – “Father, with a whirlwind in my heart, for the first time in my life, I chose to go against your will.”