There has to be an Unexpected Heroes part two because this show didn’t end. It teases us with a so-close-but-yet-so-far wrap up, hinting there’s more on the horizon, but nothing comes to a close. The romance isn’t settled and the bad guy isn’t caught. Yep, the writer had to have planned this cliffhanger so I’m expecting a second season and hoping it comes soon! 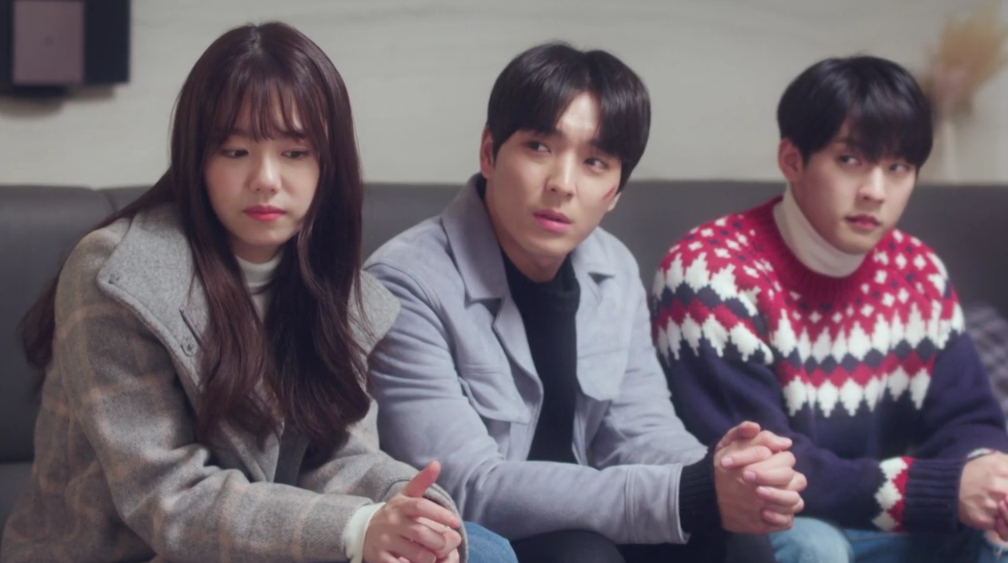 While police detective No Sang-Yun is out at night, inspecting the scene of a crime, a vehicle deliberately runs into him. It’s obviously first degree murder but with no CCTV cameras at the scene, there’s no way to prove that fact. To the world it just looks like a plain and simple car accident that claimed the life of a fine police officer. Because he is an organ/tissue donor, three teenagers are able to benefit from his selfless act of kindness as each receives the necessary transplant he/she needs for a healthy life. Min Su-Ho gets the cop’s heart, Bae Joon-Young is the recipient of the man’s tendons, and Lee Yoon-Ji gets his corneas. But something strange happens. As each donor recipient begins to recover their new abilities are off the charts. Because of their unusual reaction to their transplant the doctor who helped coordinate everything gets permission to have the recipients live with her so she can observe their rehabilitation more closely. When the kids each begin to have a vivid repeated nightmare of someone being hit by a car, they wonder if it could have something to do with their donor. It’s a good thing these three teenagers have developed superhuman powers because they’re going to need them when they decide to get involved in some crimes that are happening around them.

Min Su-Ho received Officer No’s heart. No one knows why but after the operation he became incredibly strong, able to lift barbells loaded with an incredible 300kg (661 pounds). Before he came to stay with Doctor No he lived with his police officer uncle. He is a quiet, thoughtful teenager. It doesn’t take long for him to fall for Lee Yun-Ji. Jun-Yeong compares Su-Ho to Superman.

Bae Jun-Yeong is the recipient of the man’s inderal and Achilles tendon areas and muscle tissue. Miraculously (after the transplant) his heart rate is able to remain normal even if he runs at his maximum speed for long distances. He is an outgoing young man who enjoys the fact that he is now popular with the girls at school and he plays the Casanova part well. He’s on very friendly terms with Lee Yun-Ji. Jun-Yeong proclaims himself to be like Iron Man.

Lee Yun-Ji is given No Sang-Yun’s corneas which, for some reason, gives her incredible sight. In fact, the doctors don’t even have a way of testing just how good her eyesight is. She likes Jun-Yeong and is a bit jealous of one particular girl he seems to have a thing for.

The character of Min Su-Ho is played by 28 year old Choi Jong-Hoon. As a guitarist, keyboardist, lyricist, and composer the man is a multi-talented musician. While still in high school he joined FNC Entertainment and in 2007 he made his entertainment debut with the rock band F.T. Island. He branched out from the music industry and was a model during the Autumn Seoul Fashion Week in 2009. For a guy who has only done a little bit of acting (he’s been in this and one other webdrama, one drama on a cable network, had a supporting role in the feature film Your My Pet, and he’s made appearances on a few shows here and there) I was quite impressed with his performance in this.

Twenty-seven year old Lee Min-Hyuk is a rapper, singer, songwriter, and actor. He acted in a JTBC sitcom as “Invincible Chungdam No. 5” before officially debuting as a member of the boy group BtoB in 2012. After graduating from high school he attended Dankook University as a music major. He’s also an underground music artist that goes by the name Heota. Min-Hyuk is known to be very athletic. He won the MVP title at the 2014 Idol Star Athletics Championships. His motion picture debut is in the historical action film entitled The Swordsman. His music solo debut was last July with a Japanese EP consisting of five tracks. I thought he was great in the role of Bae Jun-Yeong.

After winning the National Junior High Title as a libero in volleyball you might have thought Kim So-Hye would have become a professional athlete. But you’d be wrong. She was training to become an actress and had no experience singing or dancing before she finished fifth place on Produce 101. From there she became a member of the girl group I.O.I., all the while continuing her acting training. In 2016 she created her own management label called S&P (which stands for Shark &Penguin) Entertainment. She also opened a coffee shop called Penguin’s Café with the intention of connecting with her fans. Her acting debut came last year with the webdrama Poetry Story, which I haven’t seen, but she’s very good as Lee Yun-Ji in Unexpected Heroes.

There are a few police cases the unexpected heroes get wrapped up in – local burglaries, a kidnapping, and they discover that their donor was murdered – which gives the three teenagers a reason to use their new abilities. If you’re a superhero you’ve got to fight crime, it just naturally comes with the mantle.

With a 16 episode Kdrama we can spend the first three hours trying to decided if we want to commit thirteen more to that story. With a webdrama that lasts, start to finish, two and a half hours the writer, actors, and director have to grab our attention in the first 15 minutes, and that’s not an easy task. However, Unexpected Heroes did it for me. There were no “oops” moments that I caught, the acting was far more than decent, the storyline was original, and the writing was enough to make me keep playing those episodes. This is a good show with an excellent cliffhanger.

Unexpected Heroes was supported by the Center for Disease Control Organ Transplant Management Center in an effort to raise awareness for organ and human tissue donations.

The music, in all honesty, didn’t stick in my mind. But, then again, it didn’t have 16 hours to play over and over and over and over like a regular drama. I went to YouTube to see if I could find the show’s soundtrack to jog my memory but came up empty. There are clips of the story but it doesn’t say if the music is from the show’s soundtrack or not. As good as this webdrama is, it’s not worth me watching it again solely for the purpose of listing to the music. Sorry I can’t give you any information where that’s concerned.

The background settings are fine, nothing spectacular but everything fits perfectly into the plot. The hospital, the school, Doctor No’s house – it’s all normal stuff. As far as webdramas go, Unexpected Heroes is one of the better ones out there. If you have a spare hour and a half, give it a try. I think you’ll like it.

The Bad:
We have to wait for a part two