Anyone remember Herbie the Love Bug? In case you’re not familiar with him, Herbie is a 1963 Volkswagen Beetle that has a mind of his own and is the star of several American movies. Well, My Only Love Song has Herbie beat because their old Volkswagen Van, Boong Boong, is a gateway for time travel. Take that Disney films! 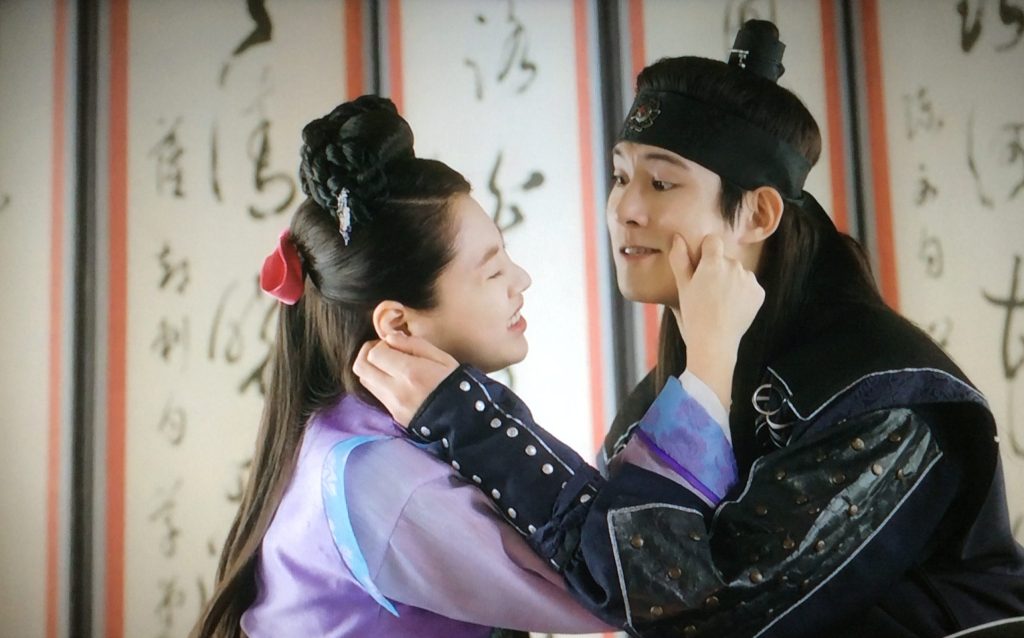 While filming on set, actress Song Soo-Jung gets the news that the man she had planned to marry had just officially announced his engagement to the media – but Soo-Jung isn’t the bride to be. The actress working opposite Soo-Jung smugly admits to being the man’s fiancé and, after literally kicking the woman in the face, Soo-Jung does what any humiliated and heartbroken actress would do, she jumps into the van used by the art team that specializes in period dramas and runs away. But where should she go? Luckily, the van’s GPS lets her know a destination has already been set so she just follows the navigating system’s instructions and soon finds herself surrounded in fog. When the van hits something and stops, Soo-Jung gets out and discovers she has actually driven to sixth century Goguryeo and the people she encounters are the exact same characters that are in the movie she was just filming!

Although On Dal was born into an upper class family (his father was a friend of the king) he has had nothing in his pockets for the past 17 years. At just seven years old, On Dal witnessed his father’s murder and ever since then he and his mute mother have lived in poverty. She was sold into slavery and he does whatever he can to get enough money to buy her freedom. Because of that, although he is thrifty he is still “unimaginably poor.” On Dal is clever, quick witted, kind, and good with a sword.

It is said that Song Soo-Jung is so well-known, “even babies recognize the top star.” She was raised by her grandmother in a small town and although they didn’t have much they were never lacking in the necessities of life. Soo-Jung is 26 years old and has been working as an actress for the past 13 years. The key to her acting success is her tears, she knows when and how to use them to her advantage and it’s paid off by making her a mega-star. Although her acting may be good, her personality isn’t. She is arrogant, rude, foul mouthed, and her explosive temper occasionally turns violent.

Byung Sam-Yong is Soo-Jung’s road manager. He’s kind of a cross between her mother and her slave. He drives her to appointments, makes sure she stays on her diet, helps her rehearse her lines… Sam-Yong was hiding in the back of the van when Soo-Jung made her escape and he ended up in Goguryeo right along side her. Although she treats him like a second class citizen, he is loyal to her and is desperate to get her back to where they belong.

No one could ask for a better body guard than Moo-Myung. He is the best swordsman in the nation and handles the blade beautifully. He is the man whose task it is to protect Princess Pyunggang and it’s not all that easy to do, especially when she has been given the order to marry a horribly abusive man. Moo-Myung is also the princess’s one and only friend. What she’s not aware of is the fact that this simple man is very much in love with her. Moo-Myung does not speak verbally but has a remarkable ability whereby those he converses with can hear his thoughts. Moo-Myung means “one without a name.”

Ever since her birth, King Pyungwon has kept tight reign on his daughter, Princess Pyunggang, sequestering her in her room for most of her life. She has been ordered to marry Ko Il-Yong but refuses to do so because she does not love him. She is an avid fan of romance stories and wants to marry a man that would give his life for her. One night, when she sneaks out of the palace, she ends up meeting Soo-Jung, On Dal, and Sam-Yong and, along with Moo-Myung, she escapes her fate by joining them in the magical van.

Ko Il-Yong is the eldest son of the Ko family who have the greatest political power of the time. He claims he is as beautiful as a flower and is always complimenting himself. The man is the personification of the word narcissist. He claims to be an excellent swordsman and has a weakness for foreign things, especially foreign women. He has a love/hate relationship with Soo-Jung – she made fun of his manhood when she saw him bathing in a river and tormented him by saying he was tiny, however, she made his heart race when she danced for him (he didn’t know it was her because she was wearing a mask).

To find out more about Lee Jong-Hyun, the man who plays the part of On Dal, you can go to my review of Evergreen.

Information on Gong Seung-Yeon, the woman whose character is Song Soo-Jung, can be found by going to my Are You Human Too? review.

My Only Love Song is a reunion for Lee Jong-Hyun and Gong Seung-Yeon who played virtual husband and wife in the reality variety TV show We Got Married. I don’t know if their experiences as a virtual married couple helped their chemistry as On Dal and Soo-Jung but I can tell you the kisses in this show are excellent.

Although I loved On Dal, I really had a difficult time liking Soo-Jung. There’s a difference in a feisty personality and a mean one. Koreans seem to like “sassy” girls but Soo-Jung goes way out of the sassy realm, if you ask me. She’s not a horrible, evil witch but she’s far from being pleasant. The difficult situation and the love of a good man softens her a bit but not enough for me to want to be her friend.

The scene stealer in this show is Ko Il-Yong, played by Park Joo-Hyung. Some shows just have characters like that, ones that make the show so much more enjoyable than they would have been without them. In my opinion, Ko Il-Yong joins the ranks of hilarious supporting Kdrama characters right next to other greats such as Eric Jo (in My Husband Oh Jak-Doo), Shin-Hyuk (in She Was Pretty), and Cheon-Sang (in Let’s Fight Ghost).

The idea of having the movie studio van travel through time with these folks was brilliant. It allowed them to have things from 2017 with them without us questioning, “Where did that come from? I didn’t see that come with them.” – clothes, alcohol and glasses, a flashlight… – but if you bring along a van full of items from 2017 it all makes sense. It’s fun seeing a princess dressed in a high school girl’s uniform and friends playing drinking games with a bottle of soju in sixth century Goguryeo.

I never laughed out loud but there are many silly moments in My Only Love Song – light hearted times that made me think “that’s cute”. Would I classify it as a true comedy? No. But it is fun.

Sadly, there were three “oops” that really stood out. In episode two Soo-Jung is tied up sitting on a chair with a cloth around her mouth but the next thing we see is her on her knees and the gag is gone. Yes, they could have untied her and had her kneel but it doesn’t show that. One minute she’s tied to a chair and gagged and the next she’s not. In episode 12 Soo-Jung and On Dal are flying a kite and when the wooden spool that is holding the string is dropped, there is no string attached to anything. Lastly, the next episode has Soo-Jung disguised as a man complete with mustache but when she is caught and turns around – no mustache. Also, in that same scene she throws a bag of rice into the air and in slow motion it falls in a shower on her and Il-Yong’s hair, however it’s not in their hair seconds later.

My Only Love Song, which is 20 episodes (each is a half hour) long, is a Netflix original that was also distributed over Naver Corporation (a South Korean internet company) and Sohu (a Chinese internet company).

I’m disappointed I’m not able to say Lee Jong-Hyun was part of the soundtrack. I love it when the actors/actresses in the drama also perform some of its music. Lee Jong-Hyun is an excellent singer/song writer/ guitarist and they had him already part of the cast. What prevented them from having him perform a song? Anyway, the songs in the show are absolutely gorgeous, all three of them. Lee Ki-Chan croons Only One, Jae Yoon performs Thank You, My Love (aka Dear My Love), and Yu-Na (from AOA) powerfully sings Another You. Check them out on YouTube. They’re simply beautiful.

Of course, as in every historical drama, the setting/scenery/backgrounds are beautiful. From Princess Pyunggang’s fancy room to the exquisite outdoors scenery, the whole show is aesthetically pleasing. 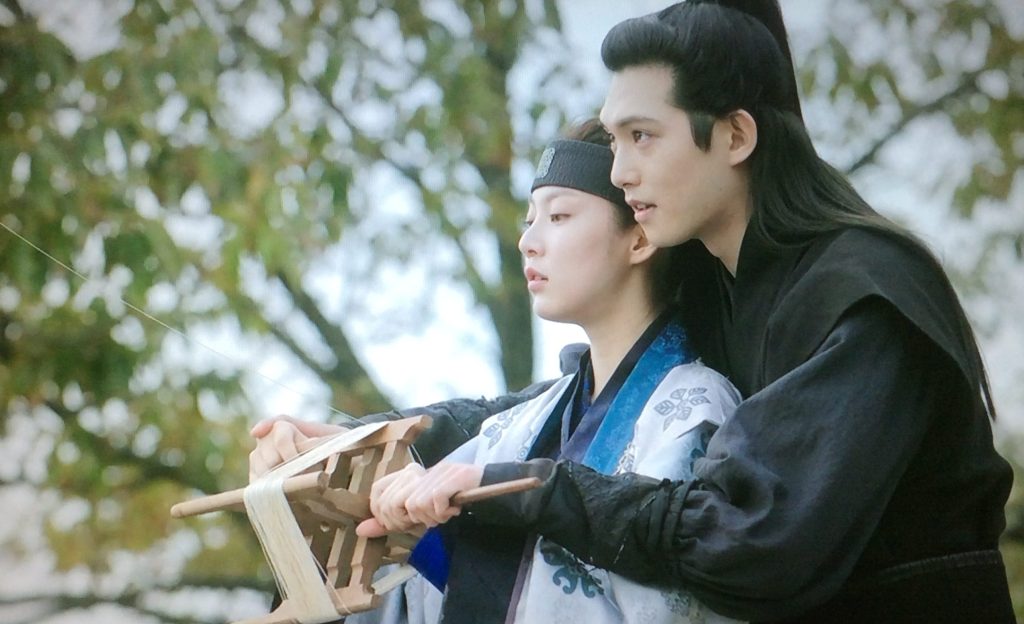 My Only Love Song has something for everyone – time travel, silly situations and characters, a sassy girl, two wonderful guys, historical fiction, and romance. I guess you could say it’s a hot pot of Kdrama entertainment.

The Bad:
Three major oops”
Lee Jong-Hyun did not sing on the soundtrack