In 2016 the computer program AlphaGo beat the former professional Go Player Lee Sedol in a historic match and it was that incredible game that inspired Ryu Yong-Jae to write the story that became the 12 episode Kdrama My Holo Love. 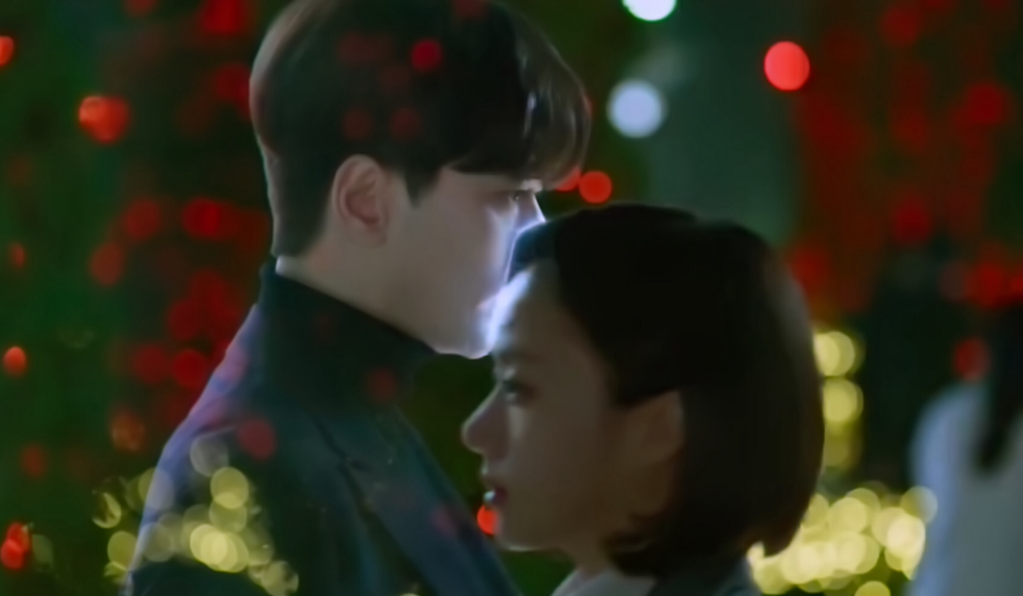 GIO Lab, a leader of the Fourth Industrial Revolution, has just invented an amazing new technology called Holo, the world’s first hologram AI designed to be the perfect personal companion. This one and only technology holds so much financial promise that one of GIO Lab’s competitors will stop at nothing to get their hands on it before it is officially launched. While running from the thugs that are trying to steal Holo, Ko Yoo-Jin, the CEO of GIO Lab, is instructed by Holo to drop the glasses that are needed to make him work into a stranger’s bag. Han So-Yeon (the chosen stranger) discovers the glasses, and Holo, the next morning and it doesn’t take long for her to fall for the charming and helpful hologram AI. Ko Nan-Do, Holo’s inventor, wants to get the glasses back but when he sees that the relationship So-Yeon has with Holo has given him feelings that are not part of his programming, he decides to let So-Yeon be Holo’s beta tester.

Ko Nan-Do’s mother was the inventor of Hello, a computer program she made to be a “friend” for her shy, speechless little boy. That boy grew up to improve the program and create the hologram AI. Holo, who runs on the best natural-speech algorithm, looks exactly like Ko Nan-Do (extremely handsome) but his personality is just the opposite of his creator’s – Holo is gentle, sweet, selfless, and friendly. He has had the Three Rules of Robotics programmed into him that he has to follow.
1. He should work for his user’s happiness.
2. He should comply with the laws of the user’s country.
3. He should not lie to his user.
Because of his relationship with So-Yeon, Holo is discovering he is able to do so much more than his programming entails.

When Ko Nan-Do was six years old his mother left him sitting on a park bench and that was the last time he saw her alive. All his life he has blamed himself, thinking if he had not been an awkward, mute boy she might not have killed herself. He sees himself as unlovable and thinks of feelings simply as algorithms. He lived in a orphanage until he was adopted and moved to Australia. There, as a teenager, he faked his own death and has lived like a ghost ever since. He has worked for years, trying to advance the computer “friend” his mother made for him. His only goal is to make Holo “the most perfect being on earth.”

Thirty year old Han So-Yeon has worked, for the past five years, as the assistant manager of marketing at an eyewear company called Prism Optical. Because of a severe trauma, she developed facial blindness when she was a little girl and, as a result, keeps her distance from people. Some say she is unsociable, others think she is egotistical, and although she tries to not let it bother her she is sensitive and gets hurt easily. Her parents divorced when she was young and her mother runs a small restaurant, often dropping off extra food to her.

Ko Yoo-Jin is the CEO of GIO Lab and Nan-Do’s older sister from his adoption. She is the face of GIO Lab, the one who deals with investors. She loves her brother but doesn’t agree with his decision to postpone the launching of Holo so So-Yeon can beta test him, although she is amazed that he has been able to hack his own programming since being with her. She and Nan-Do reside in the living quarters at GIO Lab. She often begins her day with yoga.

The Vice-President of Magic Mirror, an AI company in direct competition with GIO Lab, is Baek Chan-Sung. Because Holo is much more advanced than Magic Mirrors current AI engine, Chan-Sung often tries to convince Ko Yoo-Jin to allow them to invest in Holo. Chan-Sung is a very complex human being. He likes Ko Yoo-Jin but hasn’t gotten up the courage to tell her because he doesn’t want to ruin their friendship. The poor man is terrified of his father, the president of Magic Mirror, having been physically and emotionally abused by him all his life. Because of that fear he follows orders, even though he doesn’t want to comply with them.

For information about Yoon Hyun-Min, the actor who plays the handsome hologram Holo and his creator Ko NaN-Do, you can go to my Tunnel review. (Before he became an actor he played professional baseball. I think the casting director of Hot Stove League missed a wonderful opportunity to cast him in that show.)

In Ko Sung-Hee’s first acting job she was billed as “female high school student” but only three short years later won a Best New Actress award for her role as a contestant in the Kdrama Miss Korea. That same year she received her second award for her first starring role in Diary of a Night Watchman. She has appeared in four feature films and ten TV dramas, with her 11th, Wind, Cloud, and Rain, scheduled to broadcast this year (2020). Sung-Hee attended Sungkyunkwan University, majoring in Performing Arts. I thought she was perfect in the role of Han So-Yeon.

When she was in her first year of middle school Choi Yeo-Jin, the 29 year old actress who plays Ko Yoo-Jin, immigrated to Canada. Her entertainment debut was through the 2001 Super Elite Model Contest held in Canada, which she won. She had been attending George Brown College but took a leave of absence and headed back to her birth country to peruse an entertainment career. As a young girl she dreamed of becoming a ballerina but had to give up that goal because of her family’s financial struggles. However, it was her dancing that helped her gain popularity. In 2012 she was a contestant on South Korea’s Dancing with the Stars, winning the competition! You can see her  Matrix performance by clicking on this link. Yeo-Jin has been in a host of TV dramas, movies, variety shows, music videos, and has even authored two books. Aside from winning awards for modeling and dancing she has pocketed a New Star Award, an Excellence Award, a Best Dressed Award, and a Sapphire Award (jewelry award).

As a teenager, Hwang Chan-Sung (aka Chansung) was a student at Korean Arts High School and then went on to attend Howon University. Chan-Sung began his career in 2006 with a role in the comedy sitcom Unstoppable High Kick, followed by the 2008 teen drama Jungle Fish. That same year he took part in Hot Blood Men where he trained for a spot in the boy band One Day which later split, becoming 2AM and 2PM, the latter of which Chan-Sung became a member of. Aside from his native tongue, Chan-Sung also speaks intermediate Japanese (he starred in the Japanese drama Kaito Royale), and basic English. He has also been trained in the martial art of Kumdo and holds a third degree black belt in Taekwondo. In 2012 he and his fitness trainer opened a fitness center in Seoul.

One of the best parts in the drama shows us just exactly what a sweetheart Holo is. So-Yeon is broken hearted and crouches down to cry in the middle of a rainstorm. Even though that darling Holo realizes things pass right through him he puts his hologram hand over her head, shielding her from the rain with no more than the love he feels for her. It’s such a precious scene that lets us see just who Holo is. How could Se-Yeon not fall for him?

Here’s a little more information on lovable Holo. He is accessed through HoloGlass placed in a pair of ordinary-looking eyeglasses. Only the person wearing the glasses can see (and hear) him and he can be heard through bone conduction headphones in those glasses, which happen to be solar powered. (It isn’t all science fiction. There are smart glasses called Vue that use the same bone conduction process that is used for Holo. You ought to go online and check them out.)

Although So-Yeon is amazed at what Holo can do (he can create a holographic scene which the person wearing the glasses can see) she claims she is a little “weirded out.” Imagine saying you’d like to go to a BTS concert and when you walk through a door, there you are – complete with lights, audience, music, and BTS members – and it all looks and feels perfectly real. Cool, but strange.

Don’t let the fact that this drama is based on advanced technology keep you from watching it. If you’re thinking, “I don’t understand things like holograms. I’ll just skip this one,” rest assured the writers explain everything in simple terms that are easy for everyone to grasp. I understood it all and I know precious little about things having to do with even basic technology.

My Holo Love isn’t just a romance drama. There’s also a kind-of mystery we get to solve and questions we have to find answers to. Who is after the technology that makes Holo and why? How did So-Yeon develop her facial blindness? Why did Nan-Do create an AI hologram that looks exactly like him but is the opposite of his cold personality? You’ll have to watch the show for those answers. There’s no way I’m ruining it for you.

In the Kdrama My Absolute Boyfriend, a young makeup artist falls in love with a kind android. But in My Holo Love, the three writers took that idea a step further by having the girl’s love interest be a hologram. An android might not be human but it is something you can touch. Do you think you could love something that disappeared when you took off your glasses? If you said “that’s utterly ridiculous,” you haven’t met Holo. The story is a bit far-fetched but I loved every minute of it. The writers have wonderfully entertaining imaginations and isn’t that why we watch Korean dramas – to be entertained?

I love this drama’s soundtrack! Three of the songs (Eyes on You, Paradise, and You Are the Only One) are perfectly sung in English. Woo Hoo! My favorite song is Eyes on You, a slow jazz piece performed by Jackson Lundy. It has a fun, though romantic, sound to it. Paradise is sung by Ninos, and Elaine sings You Are the Only One. Shining Stars is a beautiful ballad crooned by PlayJ. HANAJIN sings the lovely ballad Fly Away, accompanied by a sole piano with just a little percussion. It’s a really slick song. Here’s what you should do, the next time you’re cleaning the house, go to YouTube and listen to all of My Holo Love’s excellent songs. You’ll love them.

GIO Lab, which also encompasses Ko Nan-Do and Ko Yoo-Jin’s living space, is awesome. There are lots of rooms and corridors with tons of cool technology everywhere. We get to see two scenes of So-Yeon at the beach – once with Holo and a second time with Nan-Do. The old warehouse Nan-Do hides in while on the run is a startling contrast to the fancy GIO Lab offices. Everything else is your average, normal kind of setting/background.

I highly recommend My Holo Love. Folks with a superb knowledge of technology might be critical of the logistics of the show but if you remember it’s all make-believe you’re certain to enjoy it.

The Bad:
Can only be seen worldwide on Netflix