Love is Annoying, But I Hate Being Lonely is the newest Ji Hyun-Woo drama just out in its entirety and, with this amazing actor playing the lead male character, I wasn’t about to miss it. 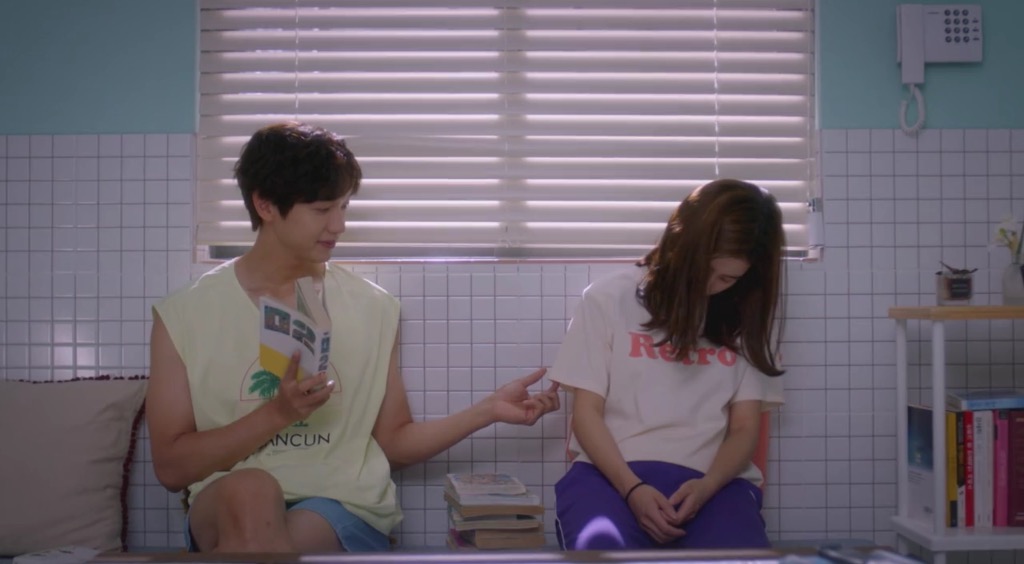 “I thought dreams didn’t come true but were only meant to be dreamt. That’s why I thought they are called dreams.” – Lee Na-Eun

When Lee Na-Eun is forced to leave her apartment, due to its lack of structural integrity, she takes up residence in her best friend’s room, while he is away on vacation, at a place called Happy Together Co-Living House. There she discovers a love she wasn’t even looking for and meets several caring individuals who help her realize life is much better when you are surrounded by people who sincerely care about your happiness.

While she is being paid to edit different authors’ works, Lee Na-Eun dreams of becoming an author herself. Eager to have her own book published, she makes silly mistakes that end up costing her not only her pride but her ambition as well. Na-Eun’s father passed away from cancer and her relationship with her mother is strained at best. Thankfully, she has three close friends that are always there to encourage her when she’s feeling down. Being slightly cynical about love, she keeps romance at arm’s length. However, she says she wouldn’t be able to live without her best friend Hyun-Jin, who happens to be a man.

Residents of Happy Together Co-Living House…
Never without a smile or an uplifting word, Cha Kang-Woo is a caring psychiatrist with his own clinic. He employs psychodrama as one way of treating his patients (original, to say the least) and his prescriptions include giggling stuffed animals and fortune-filled balls from a large bubblegum machine. But although his methods may be unconventional, they prove to be exactly what his patients need and are 100% effective. Consistent with his profession, Dr. Cha enjoys fixing things in his spare time. Complete with a giant, yellow, winking smiley face on the outer door of his room, Kang-Woo exudes positivity and happiness. No one would ever be able to tell that his cheerful face helps him hide his inner pain.

Gorgeously handsome Kang Hyun-Jin would have loved to have been a travel photographer but settled for being a flight attendant. He is very successful at what he does, often helping to train new personnel. Although Hyun-Jin has had several romantic relationships, he has yet to realize how much he loves his dearest pal, Na-Eun, whom he has known since kindergarten. His head insists they are only good friends but that’s just because he has never stopped to listen to his heart.

At one time, Kim Dong-Seok was a chef in a hotel restaurant but due to wise business decisions, he’s now the owner and manager of Happy Together, as well as a premium library-café. He is a kind, generous man who gives new tenants a gift along with a welcome celebration when they move in. He is known for being extremely friendly and very talkative. Slightly older than the residents in his co-living home, Dong-Seok is currently going through a divorce and his parents take care of his darling little kindergarten-age boy named Min.

Jeon Bo-Ra is an enthusiastic young woman who works for an entertainment company. She was born in South Korea but was adopted, grew up elsewhere, and is now back in Korea in search of her birth parents. Bo-Ra is stunningly beautiful on the outside but people would consider her personality to be cute. She is full of life, extremely friendly, and loves to throw bits of English phrases into her conversations.

Jung Hoon is a silent, stoic bodyguard which may be why he comes across as a cold, loner. In all reality, he is a very kind soul. He doesn’t seem to know how to get close to people but eventually makes friends with bubbly Jeon Bo-Ra.

Choi Kyeong-Won is a soft-spoken young woman who hides a difficult past behind her lovely face. Her family struggled financially which is evident by the fact that she was raised in a one-room apartment. She is very sympathetic and often visits her mother who is a resident in a mental hospital, suffering for the past several years from delusions of grandeur. Her dream is to be a perfumer someday with her own brand. Right now she works as a consultant at a clinic.

For information about Kim So-Eun, the actress who plays Lee Na-Eun, you can go to my Thumping Spike 2 review. (Because I’m not a huge Kim So-Eun fan, I couldn’t help but wonder what Kim Yoo-Jung or Kim Seo-Hyun would have been like in her role.)

The part of Dr. Cha Kang-Woo is played by one of my favorite actors, Ji Hyun-Woo. He first started acting in 2004 and earned the title “Nation’s Little Brother” because of how popular he was. Also, that same year, he helped form the rock band The Nuts. 2005 saw him playing the male lead in the musical Grease as well as becoming a host on Music Bank. He followed that up the next year with his film debut in Fly High. He released his first solo single, Crescendo, comprising three songs he wrote entirely by himself – words and music. While serving his mandatory military assignment this multi-talented man starred in the military musical The Promise. Some dramas I’ve seen him in are Merry Mary (I loved him but the show’s not all that great), My Sweet Seoul, Becoming a Billionaire (so good), Queen In-Hyun’s Man (my favorite), Trot Lovers (which is on my least favorite list, but he’s great in it) and Wanted.

Keon Il is the actor who plays Kang Hyun-Jin. Unfortunately, I was able to find out precious little about this handsome, talented actor. He’s 33-years-old, a member of the Kpop group Choshinsung, and although he’s been in two movies and several dramas I’ve only seen him in Sang-Doo, Let’s Go to School, and Lovers of Haeundae. I hope he’ll be cast in many more dramas because he was excellent in this.

Every single character in this story is someone we grow to care about, albeit some more than others. They each have their own trials to overcome and we’re happy when they triumphantly succeed. The main theme of this story teaches us that we can all benefit from having others in our lives. They often do for us what we can’t do for ourselves.

One really unusual, but extremely good, thing in this drama is the civil competition between Kang-Woo and Hyun-Jin for Na-Eun’s affection. These men are friends who refuse to turn against each other because they like the same woman. In a mentally-healthy, adult way they go after the same girl without resorting to tricks or underhanded tactics. They value their friendship and respect Na-Eun enough to not fight over her like she was a first-place trophy, and that’s extremely refreshing. Three cheers for the writer who decided to have the main male characters be gentlemen!

The writer wraps things up nicely by allowing us to witness each characters’ personal growth. It’s one of those satisfying endings that make us smile. And just who won Na-Eun’s heart? Well, I’m not telling you but there’s no way she could have lost when it came to love. She would have been extremely lucky no matter who she ended up with – Kang-Woo or Hyun-Jin.

I was bothered that the timeline in this story wasn’t realistic. There’s no way Na-Eun could have accomplished what she did in such a short amount of time. No possible way! And while I’m complaining, let me just point out that there are way too many “oops” in this drama.

We are treated to a wonderful surprise when we get to hear/watch Ji Hyun-Woo play his guitar and sing as his character Cha Kang-Woo. All of the music in this ten-episode drama is fantastic. Y. and Jibeom (of Golden Child) sing the excellent, upbeat song Come With Me. The slow rock song Luv Luv Baby is performed by Yu Seung-Woo, and what a slick song it is! BtoB’s Seo Eun-Kwang sings a nice song entitled I’ll Be There. Lovelyz’s Jin performs the ballad Until the Eyelids Become Heavy, and the other ballad, entitle Delight, is sung by Juniel. You owe it to yourself to listen to this drama’s soundtrack. I’m sure you’ll enjoy every song.

Of course, the main scenery is Happy Together. The building is awesome and exactly like a humongous house with co-living areas and individual rooms. Everyone shares the kitchen and dining area, the laundry room, the exercise room, the library, and the rooftop. Each individual room has a tiny kitchen, a bathroom, and a combined living room/bedroom space. I can’t imagine anyone not wanting to live there. 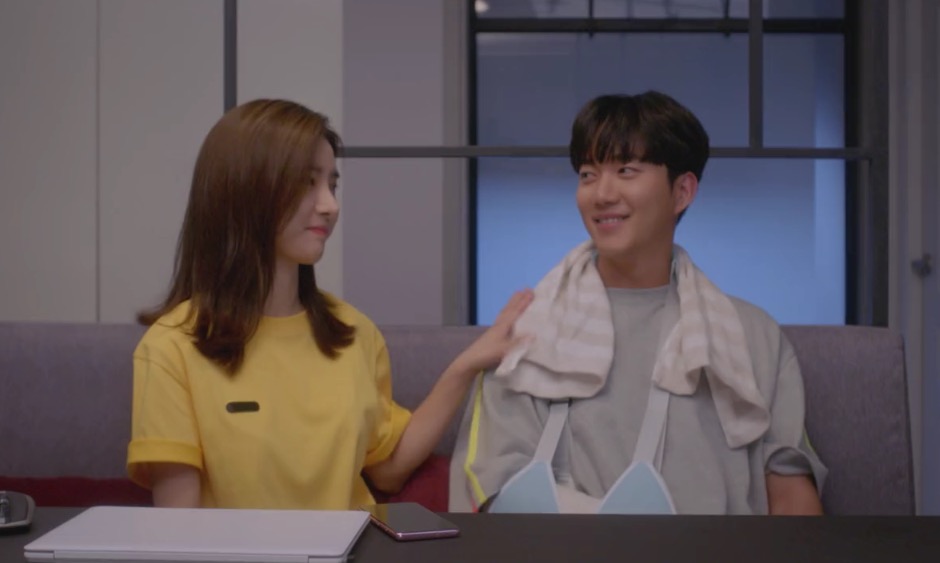 I’ll end my review of Love is Annoying, But I Hate Being Lonely with a wonderful quote from Na-Eun.
“Happiness is not something you’re waiting for but something which is already in you.”

The Good:
Personable characters
Super character growth
Friendly competition between men for a woman’s herat
Both guys would have been a great boyfriend
Soundtrack

The Bad:
Timeline of achievements is way off
Multiple “oops”