If you’ve ever read my About page, you know this website was developed for two main reasons – first, so I would have someone to talk to about Kdramas, and second, so I could give you a heads-up on what shows I personally feel would be a good use of your watching time. Sadly, Live On is not one of those dramas. I found it disappointing in several different ways. Because I’m sure there are many people out there that loved the show, I ask you to please remember this less-than-positive review is just one person’s take on the whole thing. 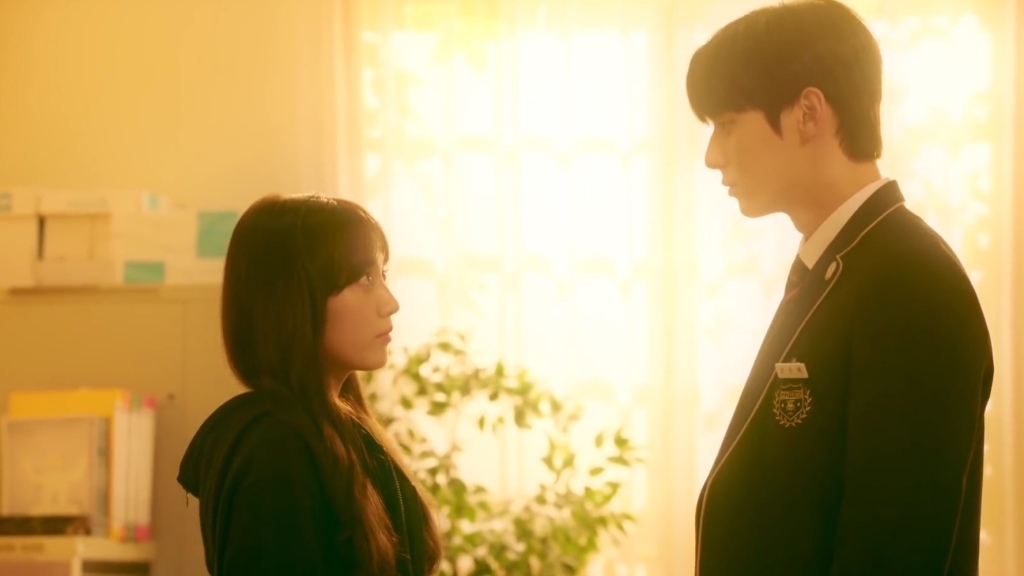 Seoyeon High School is in need of a new announcer for their broadcasting club, SHBS, and their first choice is Baek Ho-Rang, a pretty senior with a phenomenal amount of followers on social media. Surprisingly, when the president of the club, Go Eum-Taek, offers her the position, she rudely turns him down flat. But when an anonymous person begins to use the broadcasting club to harass Ho-Rang, by threatening to expose her secret, she decides to take Eun-Taek up on his offer and join the club in order to find out just exactly who it is that poses such a threat to her quiet life.

Although she is wildly successful and loved on her social media account, Baek Ho-Rang is pretty much a loner. Her chilly, standoffish attitude and unfiltered way of speaking unsurprisingly keep all her peers at bay. While still in middle school, she curtly dismissed her best friend without a single explanation as to why and has had no desire to get close to anyone since then. However, bubbly Kim Yoo-Shin has managed to wiggle his way into her life and is her one and only friend. She honestly thinks that if she avoids getting close to others, by keeping everyone at arm’s length, no one will discover her shameful secret.

Go Eun-Taek runs his life by a schedule which he always follows, down to the second. He’s an excellent student and a born leader. Although the young man has a no-nonsense, perfectionist personality he is friendly, helpful, and well liked by others. All the members of the broadcasting club respect him and happily follow his lead. He’s not thrilled with Ho-Rang’s lackadaisical attitude towards her duties in the club but slowly begins to like her as he starts to see through her tough-guy shell. Eun-Taek lives with his father, with whom he has a less than warm relationship. His parents divorced when he was young and he hasn’t seen his mother in many years.

Do Woo-Jae is a quiet and thoughtful young man who is on the student council. He is a diligent student and Eun-Taek’s best friend. He met Kang Jae-Yi at a study class and they have had an off-again/on-again relationship for a few years now.

Kang Jae-Yi’s personality is loud and boisterous. She is the one responsible for kick-starting the loving yet precarious relationship between her and Woo-Jae and is close friends with his younger sister. Her sincerity and persistence help her become a kind-of friend to Ho-Rang.

SHBS’s second in command is Ji So-Hyun. She is soft-spoken, conscientious, and puts her all into making the club succeed. She had been best friends with Ho-Rang while in middle school and was crushed when Ho-Rang shunned her, ending their friendship. She is concerned and suspicious when her former pal shows interest in being a member of the broadcasting club.

Never without a smile, Kim Yoo-Shin is the personification of the word friendly. He gets along with everyone, including cold Ho-Rang, and is liked by all who meet him. Although he is a decent student, his first priority is people so his social life is more important to him. Optimistic and positive, he lets precious little get him down. Yoo-Shin adores Ji So-Hyun and is patiently waiting for her to feel the same way about him.

The part of Baek Ho-Rang is played by Jung Da-Bin. She began her entertainment career when she was only three-years-old, as a commercial model for Baskin-Robbins. At the age of four, she had appeared in two movies and her first appearance in a TV drama came when she was five. Although Da-Bin has been acting her entire life and even won a Best Young Actress award in 2016, I wasn’t that impressed with her acting in this drama.

Hwang Min-Hyun (aka Minhyun) was scouted by Pledis Entertainment and debuted as a member of the group NU’EST in 2012. Due to a successful appearance on Produce 101, he debuted as a Wanna One member and stayed with the group throughout the contracted time (a year and five months) before returning to NU’EST. His acting debut was in the 2015 Japanese independent film Their Distance. Go Eun-Taek is his first TV drama role. Oh, he’s also done some modeling.

The four actors, who make up the supporting couples in Live On are Noh Jong-Hyun as Do Woo-Jae, Lee Da-Bin (aka Yeonwoo) as Kang Jae-Yi, Yang Hye-Ji as Ji So-Hyun, and Choi Byung-Chan as Kim Yoo-Shin. Although Yeonwoo has only been acting for the past four years, I thought her acting skills were far and away better than leading lady Jung Da-Bin’s. And darling Choi Byung-Soo-Chan’s acting far exceeded that of leading man Hwang-Min-Hyun’s. But that’s just my opinion.

I began the show eager to see how different a Korean high school’s broadcasting club is compared to the one I was a part of (yeah, KGBS!) so many years ago. That is, in fact, what drew me to the drama, and that part of the story was enjoyable. However, the rest of the drama was sadly lacking.

It’s not good when the supporting couples are more likable and interesting than the main one. Do Woo-Jae and Kang Jae-Yi’s relationship was complex (the habitual breaking up and getting back together) and thought-provoking. Watching darling Kim Yoo-Shin gingerly try to initiate a boyfriend/girlfriend relationship with Ji So-Hyun was endearing and definitely held my interest (would she ever like him back?). However, I found Eun-Taek and Ho-Rang’s relationship predictable (sparring that turns into warmth) which made them boring.

I’m about to do something I’ve only done in a couple of reviews and that is, talk about something that will be a gigantic spoiler – so skip this paragraph if you don’t want to know Ho-Rang’s secret ahead of time. The way Ho-Rang reacted to people finding out about her past made me think she was hiding something big – maybe she had been raped and someone had filmed it or perhaps she had been involved in buying, selling, or using illegal drugs. Nope… she had been the target of school bullying. That’s it. Other dramas have dealt with that subject (Who Are You: School 2015 is a good one), and I am in no way trying to belittle how horrible it is, however, I think the writer had Ho-Rang’s reaction to it be way over-the-top. Ruining a good friendship because of something like that, and refusing to make other friends didn’t seem realistic to me. So the main subject of the story (how Ho-Rang handles her trial) was, in my mind, completely blown out of proportion. Imagine watching a drama and you see the heroine being rushed to the hospital in an ambulance. When she gets there, as one doctor hooks her to an I.V. another pulls out a Band-Aid to wrap around her finger, which she had cut on a piece of broken glass while doing the dishes. That’s what Ho-Rang’s secret was like to me. The message is an important one – tell someone and get help if you are being harassed. It’s nothing to be ashamed of. Have someone with authority help you fix the situation, don’t hide from it. I don’t have a problem with the show giving good advice, it’s just that Live On‘s plot was made to seem more than it really was.

Sadly, the acting left a lot to be desired. In my opinion, Choi Byung-Chan’s acting (as Kim Yoo-Shin) was head and shoulders above everyone else’s, and Live On happens to be his acting debut! If I were a betting person I’d put money on that young man eventually doing very well in the Kdrama business.

This has nothing to do with the actual drama, but only about 1/4 of the last episode had been subtitled and that was frustrating in the extreme! I finished the whole thing only because the main conflict in the story had been settled at the end of the previous episode so I didn’t feel I really needed to understand the dialogue in order to complete the story. Sadly, I don’t think I would’ve enjoyed it anymore if it had been fully subtitled.

I’m not trying to bash the hair and makeup folks who worked on this drama but Go Eun-Taek’s makeup and hairstyle were very unflattering. The dark brown around his eyes was way overdone and the part in his bangs just made him look silly. I’m sure Hwang Min-Hyun is very handsome in real life but you wouldn’t be able to know that by watching this show. Too bad.

Live On’s highest-rated episode was its first, with a pretty low 1.302%. It was broadcast on a cable channel, where shows have a smaller audience, so that may be one reason for the low rating. I haven’t ever put a lot of stock in a show’s ratings but we’re able to garner some telling information from the rating of its last episode, which was a pitiful – 0.785%. That pretty much says the show wasn’t good enough for people to stick with – the characters weren’t likable enough for folks to want to find out what happened to them. If I didn’t write Kdrama reviews I would probably have moved on to a different show after the first episode.

As for the drama’s title, I’m not sure if LIVE is live, as in “you can’t live without air,” or live as in the comedy variety show Saturday Night Live. Because the setting was a broadcasting club, LIVE could be live as in – they were broadcasting live on SHBS. But it could also be live as in, even if bad things happen just press forward and continue to live on with a smile. Either one works. I guess it’s up to each individual to decide.

The drama’s music was nothing to rave about but there was one song I liked. The quintet TXT did a wonderful job on the upbeat song Your Light.

The backgrounds were normal, everyday things but the school was extremely nice – I wish our broadcasting room had been half that elaborate. Ho-Rang’s house was shown a few times and we also got to see Eun-Taek’s bedroom. The senior class went on an overnight trip but it wasn’t to any place with amazing scenery, like the beach or the mountains. But that was good because it made it seem more realistic.

I’m sorry this review has been so negative but Live On isn’t all that good. The only thing you’ll be missing if you skip this ten-hour drama is Choi Byung-Chan’s adorable dimples and his wonderful acting as darling Kim Yoo-Shin.