Being an American who has never set foot in Korea, I have no idea what corporate law is like over there but I learned a little by watching this Kdrama.  Honestly, I only understood a tiny bit of it but that didn’t stop me from watching A New Leaf.

Because I didn’t understand 90% of the corporate business law stuff that went on I can’t really tell you very much about the drama.  I CAN say it showed how horribly corrupt the legal system is there – and probably everywhere else in the world, as well.  It showed how greed and prestige can turn a decent person into an unfeeling monster.  And it showed how crooked big business can be. 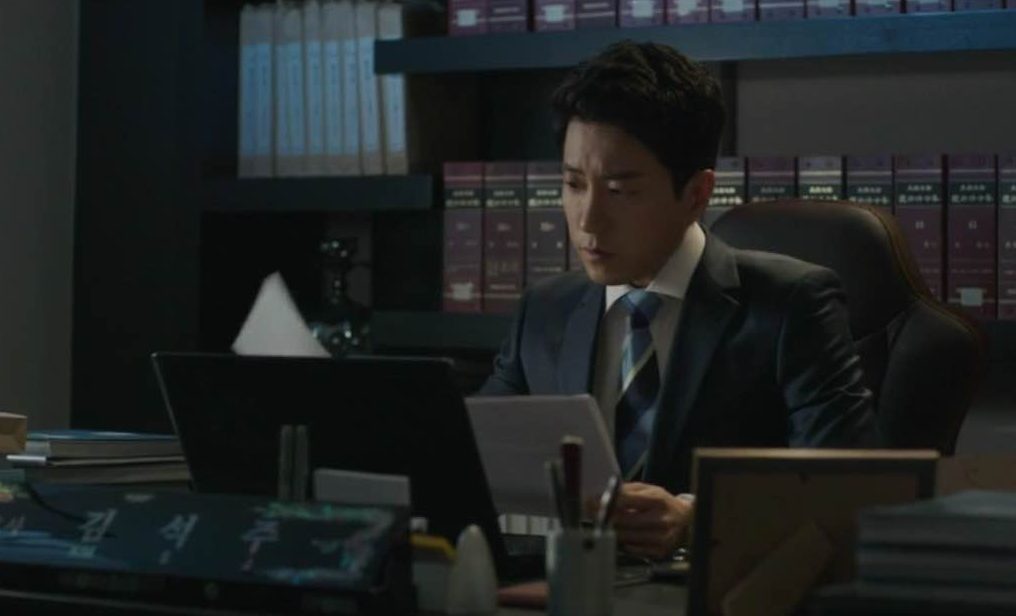 The main character is Kim Seok-Joo, a ruthless corporate attorney who has never lost a case.  He is sought after by all the big businesses in Korea and has connections all over the world.  He’s heartless, only caring about winning his case, and will do whatever it takes to come out victorious.  Just the kind of guy you want to hire if you’re ever in legal trouble.  Seon-Joo is alone one night by a deserted construction site when a motorcycle starts up and heads straight for him.  He jumps out of the way, bumps into some of the construction things and it all comes tumbling down on top of him.  Accident or an attempt on his life?  Anyway, the incident causes amnesia (shocker) and pretty much all he can remember is the law.  He doesn’t remember the extent of his involvement in any cases, just stuff like what would be taught in law school.  He keeps his loss of memory between himself and four people – his boss, his best friend, an intern, and his fiancé.  With their help he’s able to struggle through cases he has to finish but learns things about himself, along the way, that make him very uncomfortable.

My biggest problem with this drama is that it was suddenly just over.  I’ve never seen a drama like this one.  Way too often shows will just stop abruptly, not carefully winding things down to, what I consider, a proper ending.  At least they solve everything and give us closure on what’s been going on, however abruptly they do it.  And sometimes shows end leaving things open for the possibility of a sequel.  But A New Leaf didn’t do either of those things.  It was over without solving questions the writer kept alluding to answering but never did.  It was frustrating, frustrating, frustrating.  Even though I really didn’t understand all the complicated Korean law stuff that went on I kept on watching to at least get closure on the questions of Kim Seok-Joo’s personal life and the lives of the people around him.  All the law cases had verdicts so we get to see how those turned out but way too many personal questions were left unresolved.  Not okay!

Kim Myung-Min is absolutely perfect playing the cunning attorney Kim Seok-Joo.  He has a stern, no-nonsense look that made me believe he was a man out to win at all costs -win in court and win at life.  Even the tone of his voice was serious and business-like.  He’s a wonderful dramatic actor.  I’d love to see him in an all-out comedy, though.  Is he just good playing serious characters or could he also make us laugh?

Ji-Yoon is played by Park Min-Young.  I had seen her in Time Slip Dr. Jin, a historical drama, and in City Hunter, a suspense drama, and thought she was good.  Jin-Yoon has a lot of the same characteristics as her characters in those other dramas – serious at what she does, determined to excel, sympathetic, and strong.

I can’t remember a whole lot about the soundtrack.  Maybe I was just concentrating too hard on trying to understand all the Korean law stuff and just not paying attention to things that didn’t have a lot to do with the plot. I’m not sure, but I don’t remember a single song that had lyrics.  It’s definitely not music that can stand on its own, at least not with an American who was concentrating on every little thing being said.

Most of this drama was shot in the law firm, court room, Seok-Joo’s apartment, or someone’s office.  We really can’t expect a show about business and the law to be shot in a leafy, green forest or at a warm, sandy beach can we?  The scenery is limited because the plot is limiting.

So, I mentioned that I didn’t know anything about Korean corporate law but in watching this I did learn a few things…

I’d only recommend A New Leaf to someone who is familiar with Korean laws or likes shows about law and/or big business.  If you’re not in that category then I suggest you find something else to watch.  There’s plenty of great Kdramas out there with actual endings.  Have you seen Secret Garden, yet?