If asked to think of an amazing sports movie, I’m sure a host of people would have the 1976 Hollywood film Rocky at the top of their list – I know I would. This Kdrama has many things in common with that Oscar winning motion picture and, because of that, it was good old (fictional) heavy-weight champion of the world, Rocky Balboa, that crossed my mind many times as I watched Fight My Way. Ko Dong-Man, Choi Ae-Ra, and Baek Seol-Hee have been best friends since they were in grade school, growing up in a very small town. Kim Joo-Man joined the group after high school and together they make up the Fantastic Four. Ae-Ra and Seol-Hee are room mates, Joo-Man’s apartment is right above them, and Dong-Man lives just on the other side of the stairs. Joo-Man and Seol-Hee have been in a serious relationship for over six years. Dong-Man and Ae-Ra are extremely close but argue like crazy. Although all four are diligent, hard workers, these young adults from humble backgrounds barely manage to scrape by financially with the dead-end jobs they have. What happened to their hopes, plans, and dreams?

As a teenager, Ko Dong-Man had a promising future as a Taekwondo athlete. However, when he lost an important match to his biggest rival, Kim Tak-Soo, he stopped fighting. His old coach keeps pleading with him to go back to the sport but Dong-Man has no intention of competing again. He goes about his days, working for an extermination company, being mistreated by his superior.

Ever since she was a little girl, Choi Ae-Ra dreamed of becoming an announcer. She loved talking into microphones and having all eyes on her. She never knew her mother and was raised by her single father who worked hard at the little fish soup restaurant he owned. Her life dictated she get a job right out of high school because there was no money for her to peruse a higher education. Ae-Ra works at a large department store behind the information desk.

Baek Seol-Hee is a sweet, soft-spoken, selfless person who answers phones for a home shopping network. She spent six years working to help Joo-Man climb his way up to a lower-middle management position at the company they are both employed with. They love each other very much but have chosen to keep their relationship a secret from their colleagues. Joo-Man doesn’t want to jump into marriage without being able to provide well for Seol-Hee. Once he is promoted, they’ll let everyone know of their plans to get married.

Hwang Jang-Ho was Dong-Man’s coach but now runs his own little gym and sells soondae from a small truck to make ends meet. Although he understands why Dong-Man left the world of Taekwondo competition, he can’t help but encourage Dong-Man to try again.

Kim Tak-Soo is a spoiled rich kid who grew up to be a spoiled rich man. After winning the match against Dong-Man, more than ten years ago, he has gone on to be the Mixed Martial Arts champion. Winning is everything to him and if he can’t do it fair and square, he’ll find a sneaky way.

One of the best things about Park Seo-Joon, who plays the character Ko Dong-Man, is the fact that before Kdrama fans became enamored with him he had already finished his mandatory military assignment. With Seo-Joon, we are free to love without the fear of having to be away from him for two years. He kicked off his entertainment career in the music video for Bang Yong-Guk’s single I Remember in 2011 and then appeared in the motion picture Perfect Game that same year. His first lead role came two years ago in the Kdrama She Was Pretty and last year we enjoyed him in the historical drama Hwarang. Seo-Joon has also sung on the soundtracks of several dramas he’s been a part of. He has been the recipient of two different fashion awards and many for his acting including Best Couple which he shares with Ji Sung for their hilarious relationship in Kill Me, Heal Me. But of all the things he’s won, my favorite is the Watch Out He’s Gonna Make Your Heart Beat Award. If I get my way, Park Seo-Joon will be busy making Kdramas for many, many years to come.

I know Kim Ji-Won, who plays Choi Ae-Ra, best from the excellent webdrama One Sunny Day and the Kdramas The Heirs and Decendants of the Sun. Her entertainment career began in 2008 as she was cast in commercials where she became known as the Lollipop Girl. (I can’t help but wonder what commercial it was the helped her earn that title.) Her acting debut came that same year when she appeared in the drama Mrs. Saigon. She was inactive for two years and then was cast in the film Romantic Heaven and the Kdrama High Kick: Revenge of the Short Legged.

I’m guessing making this drama was a bit more tricky than filming a normal one. There are a few fight scenes and that means someone coming up with good choreography, filming angles, excellent make-up, and careful editing. I heard that just minutes of a Rocky fight took hours to shoot. Although Fight My Way‘s fight scenes were not nearly as long as the ones at the end of the Rocky movies, they still must have been tricky and time consuming to get just right. A thumb’s up goes to all those behind the scenes folks that made them look so awesome.

Sadly, I missed being able to see a training scene – you know, like the ones in the Rocky movies. It did show Dong-Man doing some practice moves and sparing with a couple guys, but a full-on training scene would have been awesome. I’m sure Park Seo-Joon exercises. How difficult would it have been for a camera crew to film his regular workout routine? Sit ups, push ups, chin ups, running, punching a speed bag… now that would have been fun to see.

I’ve seen this drama’s title listed as Fight for My Way and Fight My Way. Just that one little word “for” completely changes the meaning. Fight for My Way means you’re going to stop at nothing to get what you want – I’ll fight to get my way. Fight My Way means you’re going to fight in the way you think is best to obtain something – I’ll do it my way. Both titles fit the show, but I happen to like the second one best, so that’s the one I chose to use in my review.

The four “fighters” in this show inspire us to take a step back and evaluate our lives. Have I done what I wanted to do? Are there dreams I had that I’ve allowed to slip away? Am I settling for something because I’m afraid to fight for something better? Am I being honest with myself and those around me? I enjoy dramas that make me want to better myself and my life.

The only thing I wasn’t thrilled with was a sub-storyline concerning the Fantastic Four’s landlady which really wasn’t necessary or all that riveting.

As far as the soundtrack goes, I’m giving it a B-. The best song of the bunch is Good Morning performed by Kassy. I think of it as a kind of ballad with a beat. Her voice is soft and very complimentary to the accompaniment. Ambiguous is sung by BtoB. It’s a fast, happy sounding song. Arie Band is responsible for singing the song entitled Dumbhead. It’s fast, with the spotlight being a great electric guitar sound. One song, that has the same title as the show, Fight For My Way, just seemed out of place to me. It has more of a Latin American sound to it which didn’t seem to compliment the show all that much. Ryu Ji-Hyun sings Night is Gone, Again to the sound of an acoustic guitar. It’s the kind of song that’s hard to listen to without moving – swaying, tapping your toes, snapping your fingers – you just have to move. Chae Yeol’s dream-like voice sings the song I Miss U. It’s a lovely, soft ballad that is just as pretty on its own as it is in the drama.

The scenery fits the lives of the characters. The thing that stood out most to me is the way the MMA arena glorifies the brutal sport. Don’t get me wrong, I’m not bashing martial arts. On the contrary, I admire those that pursue that particular sport. It’s just that when Dong-Man is working out, the place he’s at (Jang-Ho’s gym) is poorly lit, dirty, and run down, yet the fighting arena is colorfully lit, clean, and fancy. Are we supposed to find a hidden meaning in that? I’m not sure. I just found it interesting. 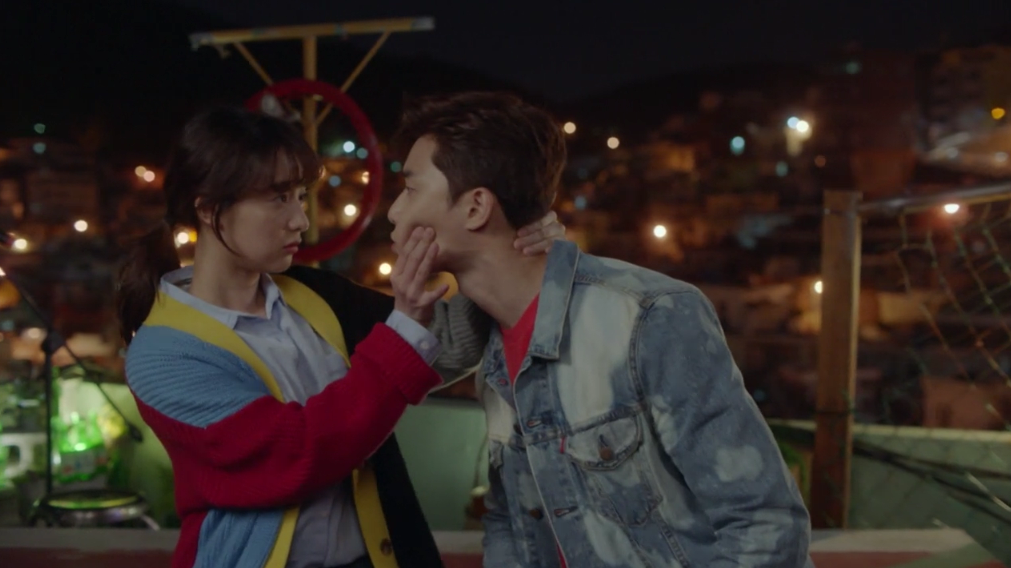 If you’re a fan of feel good, uplifting, dramas with a romantic sub-plot, this show is definitely for you. Who knows, maybe by the end it will have inspired you enough to say, from now on I’m going to Fight My Way!

The Bad:
Not so interesting landlady sub-storyline