Bride of the Water God (Habaek) is a new (2017) Kdrama based on the manhwa of the same name. However, after watching the show I read the synopsis of the manhwa and they don’t seem to have the same plot at all. After the first ten minutes of the show I stopped it and decided to watch something else instead. Later, when I tried it again, I realized I hadn’t given it a fair chance before. Bride of the Water God turned out to be far better than I had originally thought it would be. It’s a fantasy love story that gave me action, mystery, and some cute comedic moments before tugging on my heart. It didn’t end the way I thought it would, or thought it should – it was much, much better! 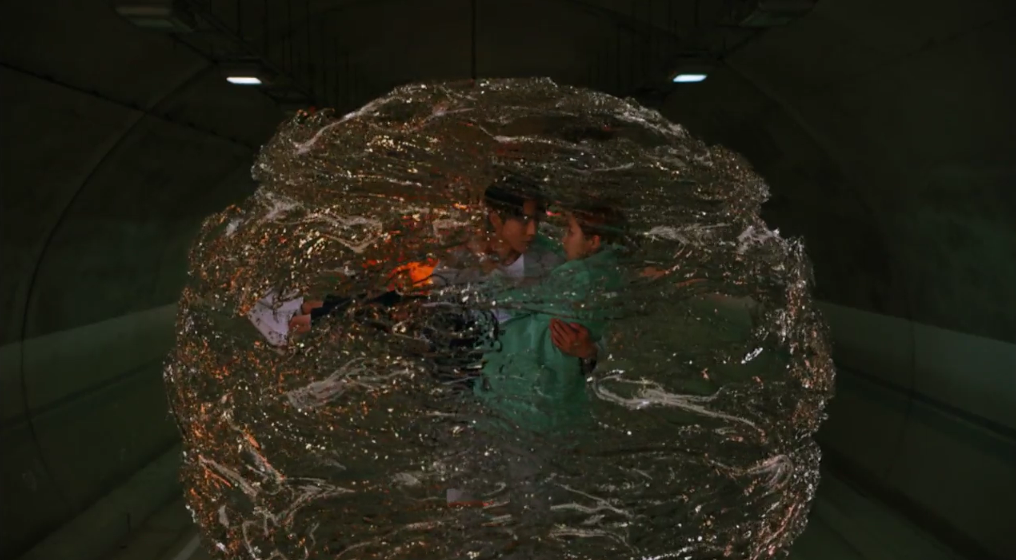 Habaek, the god of water, was born to be not only the King of Water Country but the Emperor of the entire Realm of the Gods. However, before that can happen he is sent on a special mission. Habaek is to gather the god stones from the Human Realm and bring them back to the Realm of the Gods. The High Priest also instructs him to find the reason why the god stones are kept in the Human Realm. But sometimes things go wrong, even for a god. As Habaek and his servant, Nam Soo-Ri, materialize here on earth he looses not only the coordinates that would lead them to the god stones but all his godly power as well. Fortunately, they run into Yoon So-Ah, a young woman whose family has been human servants to the gods for thousands of years and she allows them to stay in her house while they search for the god stones. As Habaek and Nam Soo-Ri try to adjust to life in the Human Realm, Habaek and So-Ah begin to fall for each other and the water god discovers his godly powers return at times when So-Ah’s life is in danger.

Although he looks young Habaek is really 2,500 years old. He knows his destiny and makes sure everyone else knows it too, reminding them, “I am the god of the water, to-be King of Water Country and to-be Emperor of the Realm of the Gods!” There’s not an ounce of humility in him, until So-Ah begins to soften his heart.

Yoon So-Ah has had a chip on her shoulder ever since she was a young girl. Her father was a compassionate man who took in orphans, and So-Ah resented the fact that she had to share him with others. He left on a service mission and shortly after, So-Ah’s mother drank herself to the grave. So-Ah put herself through college and became a psychiatrist with her own clinic. However, the clinic risks being shut down if So-Ah’s financial situation doesn’t quickly turn around.

Shin Hoo-Ye is the extremely wealthy CEO of a tremendous resort/hotel. He is kind, well mannered, intelligent, soft spoken and spends his free time planting trees and befriending a little blind girl. But CEO Shin is hiding the fact he is half god – his mother was human and his father was a god. He was kept alone in a cave until he was a teenager and then he was tossed into the Realm of the Humans. With all his wonderful qualities it’s difficult to believe Hoo-Ye is a god of death.

Mortals know Hye Ra as a beloved movie star and model, bestowing the nickname “goddess” on her. What they’re not aware of is the fact that they are absolutely correct, she is a goddess from Water Country with a major crush on Habaek. She dislikes So-Ah because she realizes the water god is loosing his heart to her. She is strong willed and has a huge ego.

Another god who lives among humans is Bi-Ryum, known to mortals as Ahn-Bin. He’s a very wealthy ladies’ man who pretty much gets everything he wants. Bi-Ryum holds a grudge against Habaek, detests CEO Shin, and is in love with Moo-Ra. During her time in college Yoon So-Ah and Bi-Ryum dated each other, although she knew him by his human name and just thought he was a regular guy.

Nam Joo-Hyuk, who plays Habaek the water god, began his entertainment career in 2013 modeling SONGZIO Homme’s spring/summer collection. The following year he decided to give acting a try with a supporting role in the drama The Idle Mermaid. Then he was cast in Who Are You: School 2015 and began getting a lot of attention. Unfortunately, his acting was criticized in that drama and in the following two he played supporting roles in – Cheese in the Trap and Moon Lovers: Scarlet Heart Ryeo. (I think his acting is fine, a bit stiff, but not bad.) The end of last year he co-starred in the romantic sports drama, Weightlifting Fairy Kim Bok-Joo, which I enjoyed a lot more than I thought I would. Joo-Hyuk has once again been criticized for his acting as the water god. Critics said his acting was poor and his dialogue delivery was monotonous. I disagree with the acting comment, and as for the way he delivered his lines, it was kind of flat but I just saw that as part of Habaek’s personality. If the director didn’t like the way his character was saying things he would have pulled him aside and corrected him. I’m guessing the director wanted the water god to be void of showing a lot of emotion. He is an egotistical god, not easily excited. I think Nam Jo-Hyuk’s portrayal of Habaek was just fine.

In 1998, at just eight years old, Shin Se-Kyung, who plays Yoon So-Ah, was on the cover and poster of Seo Taiji’s album entitled Take Five. In 2004 she began her film and television career and even sang for some of the shows she was in. She began rising in popularity when she was in the second season of the TV sitcom High Kick! I first saw her in When a Man Loves and really disliked her because of the wishy-washy, spineless character she played. However, my opinion of her changed when I saw her in Blade Man and I liked her even more after seeing her in Sensory Couple. She just gets better and better with each role.

Does anyone out there believe Lim Ju-Hwan is 35 years old? The man could pass for a teenager in one of those “School” dramas. Now that I have that out of the way I’ll tell you a bit about him. While still in high school, Ju-Hwan joined a theatrical group and was cast in the role of the pastor in The Good Doctor, by Neil Simon, for which he won the best performance award in the Fourth Youth Theater Festival of 2000. He also directed a play at the school festival. After high school, he began modeling and enrolled at Daejin University for his undergraduate and graduate studies in Theater and Film. I’ve seen him in The Snow Queen, Boys Over Flowers, Oh My Ghostess, and Uncontrollably Fond. During basic training of his mandatory military service they found he had heart problems. He was hospitalized and given the option for an early discharge but he patriotically chose to complete his service.

Born in San Fransisco, California, Krystal Jung began her entertainment career at a very early age. While on vacation in South Korea at the age of five, she and her older sister, Jessica, were approached by S.M. Entertainment and she was given a cameo role in Shinhwa’s music video Wedding March. The agency offered to train both girls for professional careers but only Jessica was given permission to join the company. Krystal’s parents thought she was too young at the time but allowed her to join six years later. Jessica debuted as a member of Girl’s Generation and Krystal debuted as the lead vocalist of f(X) in 2009. Her first lead acting role was opposite Rain in My Lovable Girl. The show is quite good and so is Krystal’s performance. She does a good job as the water goddess Moo Ra, too. She is currently majoring in Theater at Sungkyunkwan University.

Gong Myung is a member of the first ever South Korean actor group, formed in 2013, called 5urprise (pronounced Surprise). Unlike Kpop groups whose members begin their careers as singers and branch into acting, this group of five young men started their careers as actors and moved on to singing. He’s acted in webdramas, television, and film. I thought he was very good in the 2016 Kdrama Entertainer and even better in this as Bi-Ryum the wind god.

I was fascinated with Bride of the Water God‘s special effects and C.G.I. work. When Habaek saves So-Ah (twice) he, of course, uses his speciality to do it, encircling her in a ball of water. It looks awesome as well as being extremely romantic. It also shows him go through a closed window and turn into water. So, so cool. A+++ to the special effects guys!

Now comes the criticism… how did the director and editors miss the scene close to the end where Habaek is holding So-Ah as she’s crying on the bank of the Han River? One second his hand is cradling her head, the next second it’s on her shoulder, then it’s back to her head, then back to her shoulder. Where Habaek’s hand is, all depends on from what angel the camera is filming. The mistake is very obvious but it doesn’t change the fact that this is an excellent drama.

My favorite song on the soundtrack, and the one that comes to mind when I think of Bride of the Water God, is Without You, performed by Lucia. It just has that special something that encompasses both romance and heartbreak. Pop Pop, sung by Kim EZ of Ggotjam Project, is a light, airy sounding song with an easy beat you can’t help but snap your fingers to. Junggigo’s voice compliments the lovely ballad Reminds Me Of, slipping that song into second place for me, personally. The song I didn’t like is called Glass Bridge. I didn’t care for the music and I wasn’t fond of the performers, Savina & Drones. I’m sure there are lots of people who enjoyed it but I’m just not one of them. I did like the fact that it’s sung in English (probably written in English, as well, because the grammar is fine), though.

There are many parts of this drama that are a visual masterpiece. The scenery in the Realm of the Gods is awesome, lovely on a grand scale! In Water Country, Orca whales swim in the sky! It’s so pretty and imaginative. I wonder if that’s how it was illustrated in the manhwa, as well. The resort/hotel CEO Shin runs is tremendously huge and is as fancy as fancy can get. So-Ah’s house is interesting with several different levels to it, and Moo-Ra’s suite is outlandishly stunning, definitely worthy of a goddess. The costumes are superb and the make-up is wonderful. It’s a very visually appealing drama.

Whether or not you’re familiar with the manhwa this drama is based on, you owe it to yourself to give this show a try. I think you’ll be hooked by the end of the first episode. Romance, fantasy, conflict, action… Bride of the Water God has something for everybody!

The Bad:
Editing goof near the end