I’ve had Because It’s the First Time on my mental watch list for years, not wanting to take the time to watch it but not willing to forget about it either. Then, because I was so impressed recently with Choi Min-Ho’s performance in Somehow 18, I decided to give it a shot, and didn’t stop watching until it was over. The entire eight episode drama in one sitting, it was that good (plus, it was a Friday night with no work the next day). Twenty year old Yoon Tae-Oh has loved Hong Song-Yi ever since he can remember but somehow she never caught on. Still, he is at her beck and call, dropping everything to come running whenever she needs him. However, Song-Yi has had a secret crush on Seo Ji-An for quite some time, hoping he will be her first kiss, yet all the while Tae-Oh is her go-to guy, the person she feels closer to than anyone and trusts completely. When her mother runs away, Song-Yi has to leave her little sister with an aunt and find somewhere to stay herself, once again turning to Tae-Oh. She pitches a tent outside his door and he eventually allows her to stay with him in his apartment. Tae-Oh has hidden his feelings for Song-Yi for so long he has convinced himself he doesn’t love her any more and decides to pursue someone he met on an accidental blind date. Meanwhile, Song-Yi is wondering if she should tell Ji-An how she feels about him. If she is rejected it could ruin several years of a dear friendship.

There are five main characters in this drama, close friends who have been together for many years. Let’s begin with the leading man, Yoon Tae-Oh…
He’s the rich one in the group, having his own very nice apartment. His father is in the real estate business, owning buildings and renting them to people for business or as a residence. His mother passed away and when he was in high school his father remarried someone who doesn’t approve of the kids Tae-Oh has had in his inner circle all his childhood. He attends college with his two best friends – Song-Yi and Ji-An.

Hong Song-Yi’s father passed away when she was a very young teenager and things have been difficult for her ever since then, however, Tae-Oh has always been there to help her every step of the way. She works a handful of part-time jobs trying to make enough money to pay for her college tuition.

Seo Ji-An’s financial situation isn’t much better than Song-Yi’s, in fact, some would say it’s worse. The credit card issued in his name was used by his father who isn’t making payments on it so, thanks to his dad, he has horrible credit. His father runs a fried chicken restaurant which isn’t doing extremely well. Like Song-Yi, Ji-An also works several part time jobs, earning his way through school.

Oh Ga-Rin’s father passed away a year ago but she refuses to acknowledge that fact, always speaking about him like he was right there. Sadly, some folks in town have spread a rumor claiming she is insane. Because her father was a hairdresser she just took over his shop, although she’s never been trained in hairdressing. She has secretly been in love with Tae-Oh for years.

Choi Hoon doesn’t want to go to college like his older brothers did. He wants to be an actor. Because he doesn’t conform to his family’s way of thinking he is often kicked out of the house, at times even being beaten by his father. Because he has a crush on Ga-Rin he gravitates to her when things get rough. She is kind enough to allow him to sleep at her place whenever he’s been thrown out of his own house.

Ryoo Se-Hyun attends the same school the other kids do but is a couple years older. Although she is a bit reserved with guys and has never dated anyone longer than two months, she sees something special in Tae-Oh. His candor is refreshing and she enjoys being the object of his attention, that is, until he gets a call from a distressed Song-Yi.

Since I’ve already written about Choi Min-Ho twice, I thought if you want some information on the handsome guy who plays Yoon Tae-Oh I’ll just refer you to my Hwarang and Somehow 18 reviews.

Watching the musical Grease while still in high school is what gave Park So-Dam, who plays Hong Song-Yi, an interest in being an actress. She was rejected at 17 auditions and then decided to turn her attention to a smaller genre and starred in independent films. She also took on bit parts in mainstream movies, as well. In 2015 she turned heads with her performance in The Silenced, which won her a Best Supporting Actress award. After appearing in Veteran and The Throne she was cast in the mystery thriller The Priests in which her performance lead to her receiving 11 different award nominations, winning nine of them! She has since appeared on stage and on TV. I’ve seen her in Cinderella and Four Knights and Beautiful Mind.

During middle school Kim Min-Jae, whose character is Seo Ji-An, studied the piano and composition. He then became one of the first generation of CJ E&M trainees during his four years of high school. He’s been attending Chung-Ang University since March of 2016. His acting debut came in 2014 when he appeared in the South Korean/Vietnamese drama Forever Young. He was a Show! Music Core host for a year and has been in quite a few dramas, receiving a New Star award for his performance in 2016’s Romantic Doctor, Teacher Kim. I enjoyed watching him in Twenty Again, Goblin, and Hit the Top. His first and second motion picture are set to come out this year (2018).

The supporting actresses and actor are Jung Yoo-Jin who plays the part of Ryoo Se-Hyun, Lee Yi-Kyung whose character is Choi Hoon, and Cho Hye-Jung who has the role of Oh Ga-Rin.

The thing that propels this story forward is miscommunication or the total and complete lack thereof. The love triangle between Tae-Oh, Song-Yi, and Ji-An only exists because the friends aren’t honest with each other. Denying your feelings isn’t (usually) something that brings people closer together. It’s extremely easy for Tae-Oh to tell Se-Hyun he likes her (probably because he hasn’t invested years of emotion into their relationship) but he refuses to be honest about what he feels for Song-Yi and that causes heartache for everyone involved.

The ending was a huge surprise for me. I honestly didn’t expect it to end the way it did but, then again, it really wasn’t the end. The last thing Tae-Oh says implies there will be a sequel three years from then (which happens to be the last part of this year) so maybe that ending will be the one I was hoping for. I’m not saying it is a bad ending, it just isn’t the one I thought the writer was going for.

There aren’t a lot of songs on the soundtrack but the ones they have are decent. Our Feeling is a fun, upbeat song you can dance to, and Song For You is a slow, calm song sung in English. The words aren’t great, but they get the point across – Tae-Oh would do anything for the girl he really loves, Song-Yi.

The scenery is nice, especially for an eight episode drama released on a cable network. The friends go to the beach and they use some down-time to play in a giant fountain. Tae-Oh’s awesome rooftop apartment even has its own yard, complete with grass and flowers. 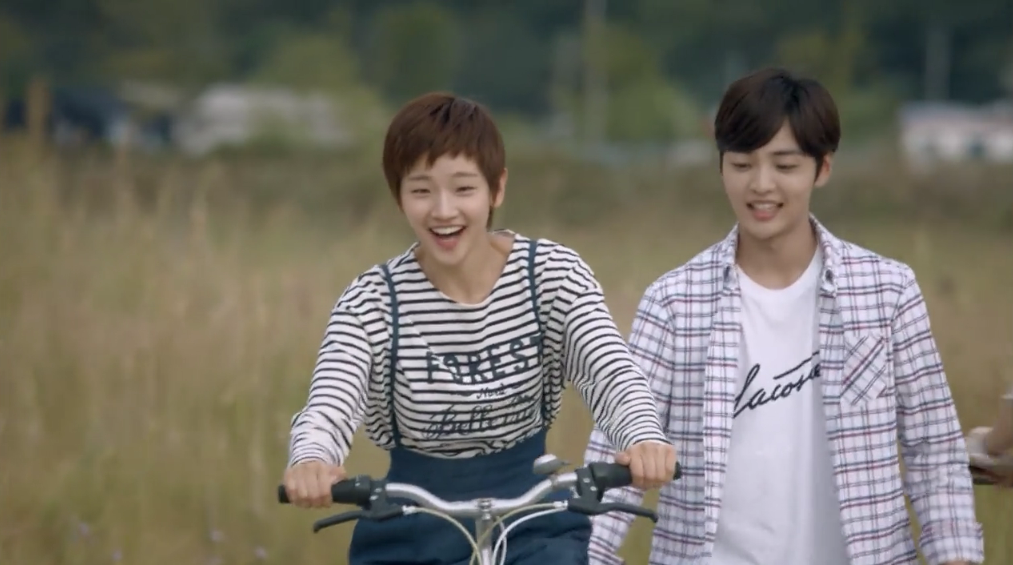 I’m really hoping I’ll hear about a part two very soon because this drama really needs to continue. Ending it how they did just doesn’t seem right. I suggest you give Because It’s the First Time a try and then pray for a sequel soon.

The Bad:
Incomplete communication between friends
Nothing really bad, the show just needs a sequel