Calling all I Need Romance (trilogy) or Discovery of Romance fans… get ready for one of the best 100% pure romance dramas in quite some time – 20th Century Boy and Girl (aka Children of the 20th Century).

This is another one of those dramas that leans more heavily on its characters than its plot.

The plot is…
We follow the love lives of the “Bongo Group” – four “kids” who shared a ride to and from school each day in a Bongo van, two of which fall in love with each other.

The characters are…
Beginning her career in a girls group, Sa Jin-Jin is now South Korea’s top actress and model. Although she’s a huge star Jin-Jin chooses to live in the same building she grew up in, directly above her family, with a secret staircase connecting the two apartments. She has a younger, jobless brother and an older sister who ran away from home over a decade ago. She may be a big star but Jin-Jin is a very soft-spoken and down-to-earth woman who is still close friends with two of the other Bongo Group kids – Han A-Reum and Jang Young-Shim. The third member happens to be her first love, Gong Ji-Won, whom she hasn’t seen or heard from for many, many years. As a young teenager she had a major crush on Anthony, a young Kpop idol turned actor, and although she is now a 35 year old adult, she’s still just as in love with him now as she was back then.

The only male member of the Bongo Group is Gong Ji-Won, a very successful international business man and CEO of a chemical company that has its hand in the making of skin care products. His father passed away when he was seven years old and when his mother remarried, many years later, he not only gained a step-father but an older step-brother as well. He also has a much younger half-sister whom he is very close to. Ji-Won and Sa Jin-Jin have known each other their entire lives, and he fell in love with her long before she was a gorgeous actress.

Handsome Lee Chul-Min, better known as Anthony, was once a teenage idol and heartthrob, a member of the boy band Boys Be Ambitious, who turned to acting when he got older. Although he was big at one time, his popularity seems to be waining. Because he is currently on a morning soap opera type show he refers to himself as the “housewives’ EXO.” His manager is hoping he may be able to gain back some fans if he can work with Sa Jin-Jin and ride on her coattails.

Another member of the Bongo Group is Han A-Reum. She is a manager flight attendant whose mother keeps pushing her to get married. Although she would love a little romance in her life, the guys she’s liked in the past have all turned her down. Because she enjoys eating, her mom tries to shame her into loosing weight. As fate would have it, she runs into a guy she used to have a crush on in high school and soon discovers he’s not as perfect as she thought he would be. Although she’s not a slob, she isn’t what anyone would consider extremely tidy, either.

Jang Young-Shim is the third female of the Bongo Group. She comes from a dysfunctional family and secretly hopes her mother will leave her father. She is the junior lawyer in a two people law firm. Her personality is quiet and reserved, probably as a result of her overbearing and emotionally abusive father. She’s not counting out marriage but she’s not actively seeking it, either. As of now there is no man in her life.

Jung Woo-Sung is a successful OB/GYN who works in a hospital. He is obsessively concerned with cleanliness, likes classical music, plays the guitar and sings, and would love to have a girlfriend. He went to high school with, but is not part of, the Bongo Group.

Kang Kyung-Suk owns a tiny law firm and is Young-Shim’s boss. He isn’t extremely outgoing but the man has a sympathetic heart and does his best for his clients. Although he loves the “drinking atmosphere” he and alcohol don’t mix. Even a few very tiny sips of beer will make him completely smashed.

I’ve written a little about Han Ye-Seul, who plays Sa Jin-Jin, in my Madame Antoine review.

After watching him play second fiddle to actors such as Lee Min-Ho in Personal Taste and Eric Mun in Another Oh Hae-Young, Kim Ji-Seok was finally able to play a leading man in this show and won the Top Excellence Award, Actor in a Monday-Tuesday Drama for his portrayal of Gong Ji-Won. He was born Kim Bo-Seok and later changed the “Bo” to “Ji.” In 2001 he debuted as a rapper in the boyband LEO which disbanded after only eight months. Ji-Seok majored in German at Hankuk University of Foreign Studies after failing the test to get into the theater department. Due to attending middle school and high school in England he is fluent in English and even got his secondary teaching certificate in German and English. He also sports a master’s degree in Cultural Contents Planning.

Thirty-eight year old Lee Sang-Woo’s acting career began in 2005 when he starred in a Drama City episode and had a small part in the drama 18 vs 29. However, it wasn’t until his supporting role in the popular drama First Wives’ Club that he really became famous. As I watched this show, Lee Sang-Woo seemed so familiar to me but I just couldn’t place him so I started searching. While looking at his filmography history I noticed a few dramas he had been in that I have seen, besides 18 vs 29, – Two Outs in the Ninth Inning, A Thousand Day’s Promise, and High Society – but I couldn’t remember who he played in any of those shows. Oh well. I think he was great as Anthony in this. Here’s some fun information – last year he married actress Kim So-Yeon and at the end of this drama she makes a cameo appearance as (what is implied to be) Anthony’s maybe future love interest.

I really liked how the girls grew up to be normal people. Yes, Jin-Jin is beautiful from the top of her head to the tip of her toes but A-Reum and Young-Shim certainly do not stand out in a crowd. A-Reum isn’t anorexic and Young-Shim doesn’t look like she even wears make-up. I loved these regular women!

I like the direction the writer took this story. There were a couple ways this romance could have played out but the fact that there wasn’t anyone plotting to pull these lovers apart was so nice. The characters only had to battle life, just like all of us, and that made me connect with them a little better.

The romance isn’t quite as good at the I Need Romance shows but the characters are. Also, there is only a handful of kisses but most of them are real – mouths open, heads moving…

One fun thing about this show is that Jin-Jin gets to be on We Got Married! I love that show. To be honest, I’ve only seen a few couples (I watched all of Namgung Min, Kim Hee-Chul, Ok Taec-Yeon, Jung Yong-Hwa, and Kim Hyun-Joong) but I’ve enjoyed everything I’ve seen. If you’re a We Got Married fan you’re going to love this part of the drama. They don’t do it exactly like the real show, but close enough.

Ready for this show’s “oops?” Jin-Jin sees a bug, screams for help and Ji-Won comes to her rescue. He scoops the bug up in a tissue and then tries to leave the room. However, the door handle is broken and they can’t get out. Then, as Ji-Won is jiggling the handle, there’s no tissue in his hand. Huummmm? He didn’t throw it away. Jin-Jin didn’t take it. We don’t see him put it in his pocket or drop it on the floor. Maybe he’s secretly a magician who knows how to make bugs and tissues disappear.

Not Too Distant Day, performed by MeloMance, is my favorite song on the soundtrack and the one that seemed to be played most on the drama. All of the songs have a positive sound to them, nothing that sounds like heartache and sorrow. Standing Egg sings Ordinary Day which has the perfect sound for a romantic love story. Now, imagine a couple beginning a relationship – they’re out walking in the woods, or throwing a frisbee while at a park, or riding bikes by a river… that’s the feeling Love Letter, sung by Golden Child, gives off.

Jin-Jin, Anthony, and Ji-Won go to Jeju Island, which means we get to go too. The palm trees and flowers are a fun backdrop as the people are talking about how chilly the autumn air is. The Bongo Group’s hideout, in Jin-Jin’s dad’s chicken restaurant, is compact which is a great visual for how close these four friends are. It’s also overly ornate, like each person brought things to help decorate it when they were younger and then added to it over the years. 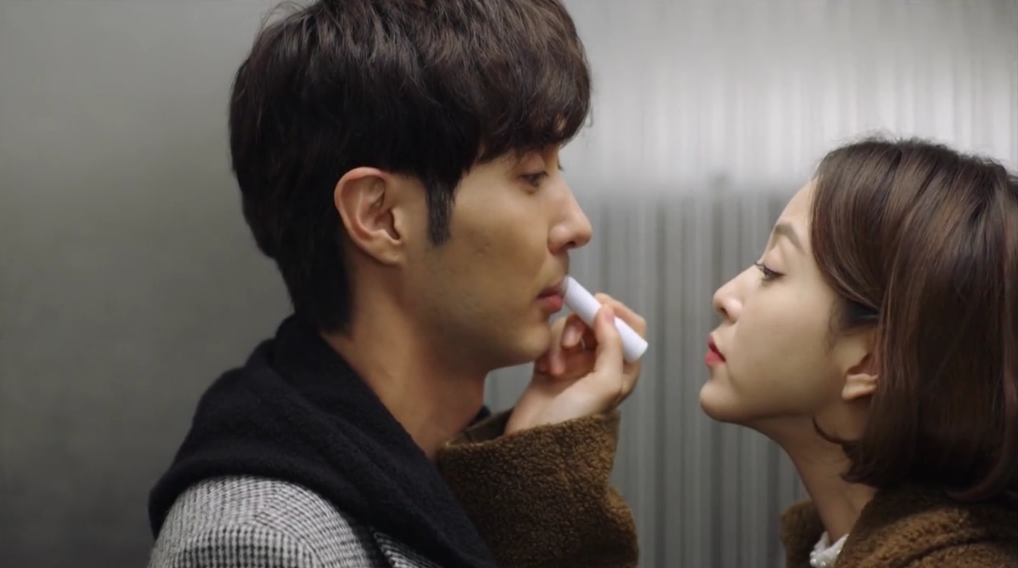 Twentieth Century Boy and Girl is a well made, interesting and enjoyable romantic Kdrama. I liked it and I think you will too.

The Good:
Romantic plot
Characters look and act like real people
Jin-Jin is on We Got Married
No bad guys
Nice soundtrack