ASTRO, Kpop’s newest boy group, made their debut this year (2015) in August via the webdrama To Be Continued.  I’ve seen some pretty good webdramas, some fairly decent ones, and a couple that just weren’t very good at all.  Unfortunately, in my opinion, To Be Continued falls under that last category. 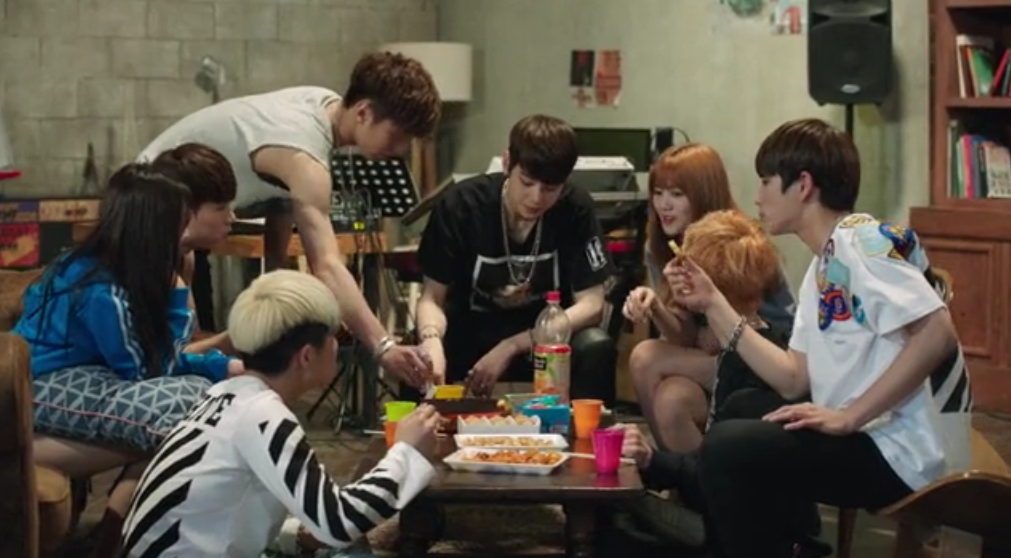 It really had the potential to be good, though.  It’s about a Kpop boy group called ASTRO who are just one night away from their debut when they find themselves thrown back in time to when they were still in high school, before they were even discovered.  That’s pretty much it, in a nutshell.

I love Kpop and I love time travel shows!  Two of my favorite things rolled into one webdrama, and darling Kim Sae-Ron is the lead actress.  How could things have gone so wrong?  I blame the writing.  The time travel end of things was just a jumbled mess.  It was a real struggle to figure out what was going on.  We don’t even get to find out what made them time travel back and forth.  The first time it happens there’s just a bunch of ominous black clouds over the building they’re in, and the next time there’s a weird crackling sound with lights flickering.  What made it all happen?  Some of the guys remembered the past – I mean the present, or would that be the future? – and some of them didn’t.  Then, two that did remember where they had come from quickly lost that memory for some reason but we don’t know why.  The two girls that are sort-of-girlfriends to a couple of the guys also went back in time, probably as an attempt to give the show a little romance but it just wasn’t enough.

The stars of To Be Continued are the members of ASTRO (which means “star” in Spanish) – Park Jin-Woo known as JinJin, Kim Myung-Jun known as MJ, Park Min-Hyuk who goes by Rocky, Lee Dong-Min known as Cha Eun-Woo, Kim Moon-Bin, and Yoon San-Ha.  It’s obvious they’ve been trained as singers and dancers but their acting just wasn’t polished.  Why is a male Kpop group making their debut as actors?  Anybody else see something wrong with that?

Eight time award winning actress Kim Sae-Ron plays the part of Jeong Ah-Rin.  She’s a multi-talented young lady who has been in eight feature films, ten Kdramas, this webdrama, three music videos, two variety shows, and she sang for the soundtrack in the movie The Neighbor.  At only 15 years old she’s certainly an accomplished entertainer.  And the fact that she’s so young gives us hope she’ll be cast in many, many more things to come.

I couldn’t help but compare To Be Continued to Dream Knight, a webdrama that had the Kpop boy group GOT7 as the stars.  Sadly, this one didn’t even come close to being as engaging as Dream Knight.  Darn.

The writer didn’t give the characters enough depth for us to really understand them and, therefore, care about what was happening to them.  And I’m sure that made it difficult for the actors to really get into their roles.  You can’t do your best acting when you don’t really know who who it is you’re portraying.  Such a shame.  I have the feeling those men could have given us a much better performance if the writing had been better.  Unfortunately, the directing wasn’t all that fantastic either.

One positive thing about this webdrama is the bloopers that are shown at the end of each episode.  (There are 12 episodes, each being about 15 minutes long.)  I happen to be a fan of bloopers.  It’s always fun to watch stars goof things up and get embarrassed.

To Be Continued does have some good music, but there isn’t a lot.  And the dancing is superb but, again, there isn’t much of it.  It just didn’t make sense to me – if the purpose of this webdrama is to introduce us to ASTRO, why isn’t there more of what ASTRO is all about?  They really should have capitalized on the obvious talent those young men have and put in a ton of singing and dancing but they brushed off that opportunity.  Too bad.

As for scenery, it’s pretty much just a high school and its surrounding area.

I hope no one will sincerely think this show is a documentary.  I mean, nobody’s going to think this is a drama about how ASTRO really came to be, right?  It’s just pretend, folks.

Watch the last episode.  In it there’s a really nice song a girl group sings and we also get to see the song ASTRO performs in the competition that will decided who will perform at a festival.  That last song is awesome and it’s just like a music video.  The guys are shown doing the same fantastic dance routine and singing the same song in a few different costumes with a few different settings.  Clever idea.

I’m really not a fan of this particular webdrama, however if the last song is what we have to look forward to with this new boy group, then as far as ASTRO is concerned I’m definitely looking forward for it To Be Continued.